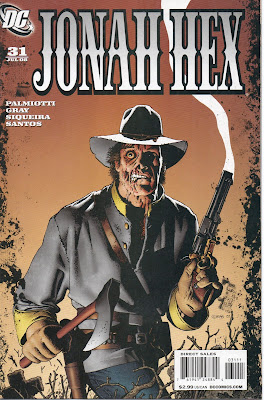 The whole town is in church and the Sheriff is addressing them, Jonah Hex at his side. A bandit by the name of the Red Mask, has been laying waste to the pocketbooks of the townspeople and the sheriff proposes that they hire Hex. His payment will be any loot that he finds on the bandit. Dozens of men have been searching the nearby canyons will no luck and Hex is their last hope.

Just then, the town drunk, Cletus Hambone, crashes into the church, drunk to the level of skunk. Cletus raises such a ruckus that the Sheriff has Cletus posterior deposited in the local hoosegow. The Sheriff, returning to business, offers the help of any townsfolk that Jonah would like to have at his side. Hex, being Hex, declines the company of 'Idjits' and takes off on his own into the canyon lands.

Night, and Jonah is roasting a rabbit, when about a dozen Apache approach him from behind. As one attempts to stab him, Jonah stops him and shoots him through the head. An intense gunfight ensues leaving just Jonah and one Apache alive. 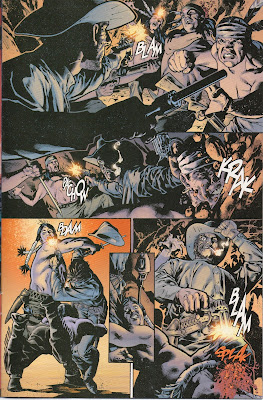 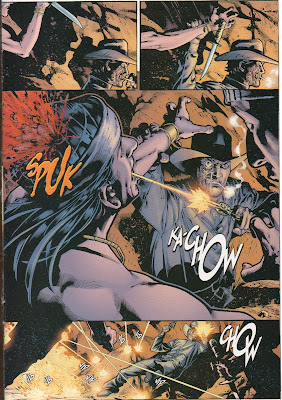 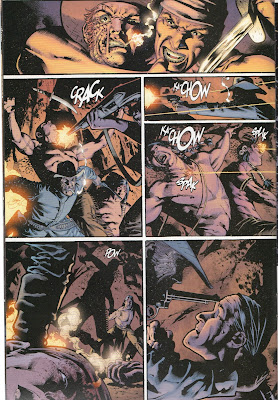 A week later, Cletus wakes up in jail, the Sheriff tossing him out. Cletus asks if Hex has had any luck. The Sheriff states that they haven't heard from him. Cletus warns the Sheriff that Hex is crafty and they better watch out so as not to be double-crossed. The Sheriff explains that he is smart, smarter than folks give him credit for. He has a plan. He knows that Hex will get the Red Mask and when Hex does, the Sheriff will make sure that Hex doesn't return with the stolen loot. The Sheriff has 'Grady and the boys' shadowing Hex and they'll kill him once the Red Mask is taken care of.

Cletus walks off into the blazing sun, with the Sheriff warning him to change his ways or he'll wind up in the ground next to Hex.

Hex is still on the trail and comes up on a cave with a campfire burning inside. He sneaks up on the figure hunched over the fire and draws his pistol, getting the drop on the man. But sadly, Jonah has been suckered by one of his own tricks as it is a dummy sitting by the fire. Another man stands behind him, a stick in Hex's back (Jonah being told it's a gun), and the man tells Jonah to drop his pistol as he takes Jonah's other pistol. He then clubs Hex with it.

We see Jonah laying on the ground, Cletus standing over him, clutching a red mask. Cletus tells Hex to stay down, they only have a few minutes to talk before they get there. Cletus puts the mask on Hex and explains about the Sheriff's men coming up here to kill him and the Red Mask but they'll 'discover' that Hex IS the Red Mask.

Cletus is gloating over how much smarter he is than the local rubes and Hex asks where the loot is buried. Cletus reveals it is under some rocks 'over there'. Jonah asks what is taking the others so long to get there and he stands up. Cletus orders him back down and Jonah says he doesn't take orders. Cletus fires four times, click, click, click, click and Jonah grabs the pistol and punches Cletus and knocks him to the ground.

Cletus on the ground, Jonah reloads his pistol and asks what the take was on all the robberies. Cletus confesses it was about $600 in gold. Jonah states that Cletus must be wondering about the Sheriff's boys and we have a short flashback of Jonah talking to the Apache warrior.

The Apache bargains with Hex, telling him that three men are following Hex. The Apache attacked first in order to get any gold or guns they thought the men were wanting to take from Hex. The Apache takes Hex to the campsite of the men and Hex allows the Indian to go. He then ties the ankle of each man to a different horse and then stampedes the horses off into the night, dragging the men with them.

We're Back, Cletus is digging up the gold, handing it over to Hex. Cletus tries to bargain with Hex, wanting to be partners, but Hex explains that they are going back to town and Hex wants to see the Sheriff's face when Hex shows up alive and with Cletus wearing the mask. Jonah binds Cletus's hands and has him walking behind the horse. Cletus chuckles... 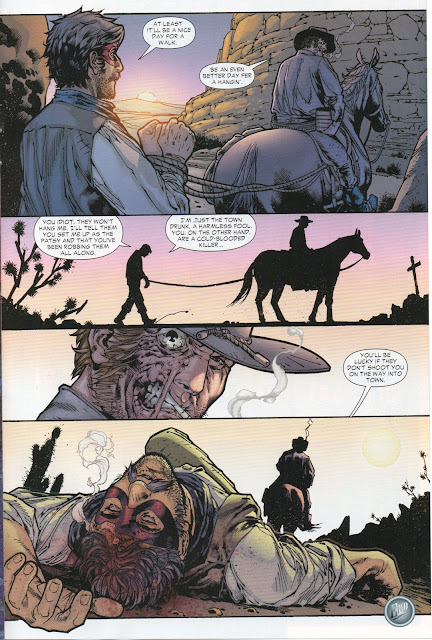 I really really liked this one. The story was great with the crooked Sheriff, Cletus as the town mastermind, the bargaining Indian, Jonah falling for his own trick (or DID he?!?!?). Top notch scripting all the way around on this one, good pacing, good twists and great action.

Now the artwork.. where has Siqueira and Santos been? Their style is fresh, clean and wonderfully cinematic and I would put it up there with Jose Luis Garcia Lopez (and ya'll KNOW how much I love  that man's work). The fight sequence with the Apache is perfect and the angles on the panels in the rest of the story is like something out of Breaking Bad or Better Call Saul, spot on! I wish they had become regulars on the book.

If you don't have this one, go grab it as soon as you can.

Next Issue: Jonah encounters a Bull and Bear Market south of the border.