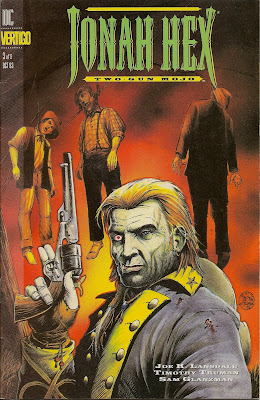 The posse is hot on Jonah's trail and the Indian girl riding behind him isn't faring so well from being shot. Jonah jumps from the horse up into some nearby trees and takes cover. waiting for the posse to ride past. He drops out of the tree behind the last rider, blows his head off with a rifle, lands on the horse and unloads his pistol into the old lady and another rider. A fourth wheels his horse around and fires at Jonah several times. Jonah returns fire twice, literally shooting out the man's eyes. Just for good measure, Jonah tramples him with the horse.

Jonah finally catches up with his horse and the girl, only to find her in a meadow, dead. Jonah, in a telling tone for this entire series (and possibly his life), notes... 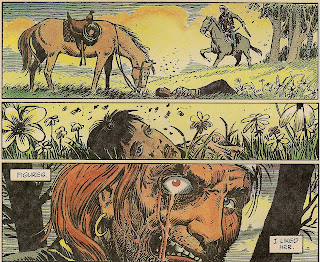 Night falls and the rest of the posse, finding the slaughtered townsfolk, call off their search and head back to town. Jonah then builds a burial stand for the Indian girl and heads back to town to see what he can learn in the dark. What he does learn is that the town has taken care of Slow Go by tossing him onto a garbage pile.

Jonah pulls Slow out of the trash, lifts him onto the back of his horse, ties him down and leaves town, but not before setting fire to the gallows.

The next morning, Jonah and Slow pass by a walking reverend, who is startled by the dead body of Slow. Jonah takes time to stop and throw a tarp over the corpse and rides on to the next town. Darkness starts to fall as Jonah enters the town, he hides Slow and decides to ask around in the saloon. However, Jonah runs into a smart-mouth former Union veteran who gets some quick dental work via Jonah's fist. Hex asks the barkeep about who does burying in the town. The barkeep points him to the blacksmith and asks what happened to Jonah's face. Hex's reply?

Jonah meets the blacksmith, explains that Slow Go is hidden by the General Store and that he wants him buried and a marker put over him. Jonah gives payment and tells the smith that if Hex learns Slow Go isn't done proper, the next coffin in town will contain the smithy.

Jonah walks down the street and overhears a loud carnival-like spiel coming from a haphazard stage in the middle of the street. It's Doc "Cross" Williams himself and his traveling freak show. Williams is touting his "Sweet Brown Tonic". Jonah sticks to the shadows and decides against just blowing all their brains out. He wants to know why they stole bodies back at the other town.

During the show, the fat lady, Ramona, drinks the tonic and does one-hand stands and flips through a burning hoop of fire. The tall man, String Bean Jones drinks some and deadlifts all 500 pounds of Ramona right over his head. Half-Pint, the midget with a pumpkin on his head juggles for the amazement of the crowd, who buys the tonic like there is no tomorrow.

Later that night, Williams' traveling troupe leaves town and Jonah follows behind. They make camp and after eating they drag out a large barrel. Williams pops off the lid, reaches inside and pulls out the zombie cowboy that shot Jonah a few days ago. Williams takes a large syringe and squirts a huge amount of a putrid liquid into the sewn up mouth of the cowboy. The cowboy sits up, draws his pistols and stands guard while the rest of the sideshow bed down for the night.

Along about midnight, Jonah sneaks his way into camp, narrowly evading the zombie cowboy. He makes his way into the wagon where he finds... 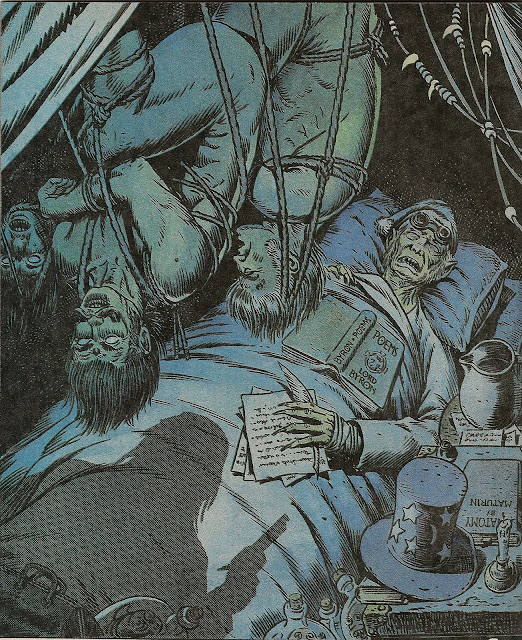 He shoves his pistol under Williams nose and demands to know the name of the weird cowboy standing guard. Williams smiles evilly and tells Hex that is none other than Wild Bill Hickok, RESURRECTED!!!

Jonah hears a noise behind him, turns to see Hickok holding both pistols on him. Quick as lightning Willliams breaks a bottle across Hex's head, knocking him out. The freak show quickly grabs Hex and stuffs HIM into a barrel and nails the lid shut as Williams announces..

Statistics for this Issue
Men killed by Jonah - 4
Running Total - 496 (432 past, 55 future, 9 Vertigo)
Jonah's injuries - Knocked out with a bottle and stuffed into a pickle barrel.
Timeline - This one covers two more days, so we are now in day 5 of Vertigo.

This issue is where the weird justs hits the ground running. Zombies I can handle, but the scene with the dead naked bodies strung up in Williams' wagon was a little too much for me. But then I have to remember that Lansdale was writing horror before he was writing westerns. I think it is an escalation of the crudity, violence, ugliness and horror that is starting to repel me. We have Jonah shooting a mans eyes out, literally (something that gets repeated in the the current Jonah Hex #64 "Lovesick"); followed by a dead man strapped to a horse; a mocking portrayal of a traveling preacher; and the hanging fetal-corpses. It was all too much, kinda like a horseradish-wasabi sandwich followed by a serrano shooter.

Next Issue: Jonah gets pickled, Williams gets away, and Bad Luck gets even, in a big big way!
Posted by Dwayne "the canoe guy" at 6:00 AM