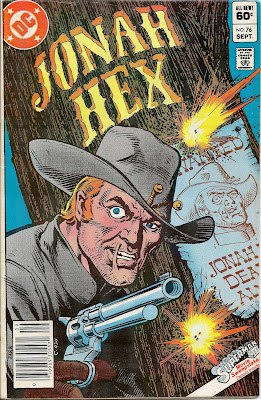 Slowly, Jonah stalks a large buck through the woods, his mind not really on the task at hand, but rather on his current relationship with Emmy Lou Hartley. He mulls to himself that he really needs to tell her, and soon. What he needs to tell her is that he is not in love with her. When he tells her he loves her, he feels like a liar and when he doesn't tell her, he feels like a skunk. Sadly when they are alone, Jonah finds himself imagining he is back with Mei Ling and that isn't fair to Emmy. Jonah finishes up his mental ruminations with a killing shot to the buck.

Later Jonah totes the buck into camp where he and Emmy are staying and she runs up to greet him. Emmy pulls out a knife and starts dressing the deer but Jonah notices a muzzle flash up in the hills and Jonah barely knocks Emmy to the ground in time to avoid being shot. Jonah tells her to keep her head low and he starts heading through the woods to get the drop on whoever is shooting at them.

Jonah works his way up the back of the hill, lamenting the fact that he didn't have any dynamite handy since dynamite always makes things easier. As it is, he sneaks up on the men and dispatches them one by one. Checking them out more closely, he realizes that he doesn't recognize them, assuming they are bandits wanting to rob he & Emmy for their gear and horses.

Ten days later, in an all too familiar mansion outside Richmond, Virginia, the eternally sour Quentin Turnbull is trying to track down his manservant Solomon. Solomon is out by the woodshed, cutting kindling for the stove. Turnbull says that he isn't hungry and hasn't been ever since...

Solomon finshes the thought, ever since word came that Jonah Hex killed the three men that Turnbull sent to kill him. Turnbull starts lamenting that there is no justice for him in this world but then notices that Solomon has a possum in a cage. Turnbull asks what Solomon is doing with the creature.

Seems like a hot pot of water and several vegetables are soon to be the future home of the possum but Turnbull demands that the creature be released. It's one thing to shoot and kill an animal because death is usually instantaneous but to subject a creature to the prolonged cruelty of prolonged.......

EUREKA!!!! Turnbull has a huge flash of brilliance! 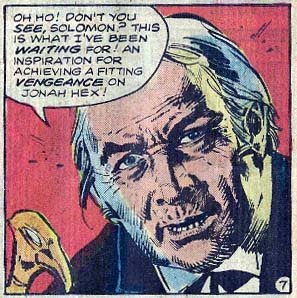 Later that same night (almost 1000 miles away according to the caption, thus putting them in eastern Texas or western Arkansas), Jonah and Emmy ride into a small town and Emmy is lamenting their lifestyle of camping and bad hotels. Jonah says that he is in no mood for a talk about settling down. He has Emmy get a room while he gets the horses into the livery. At the livery, an old man asks if he is Jonah Hex. When Jonah confirms it, he is quickly struck from behind by a pistol and is knocked out.

Later Jonah awakens near a campfire to be greeted by a man in a suit and hat. The man apologizes for having to abduct Hex, but he couldn't have it known that Hex was having a secret meeting with the Governor of the state (which state is never mentioned, but is probably Texas or Arkansas). 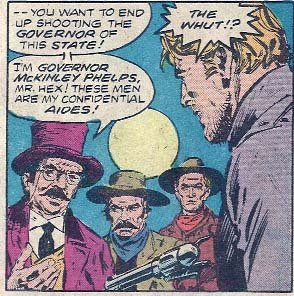 Gov Phelps explains that he wants Jonah to be sentenced to a long term stay in the state penitentiary. It doesn't matter what crime is committed, but Jonah will be Phelps' eyes & ears in the prison. After a month, Hex will be freed and paid for his time.

Phelps explains that the warden & guards are corrupt but he cannot gather any evidence against them, so that will be Jonah's job. It would not arouse a whole lot of suspicion if Hex were to turn outlaw. Jonah points out one flaw in Phelps' plan. Namely, if anything happens to Phelps, Hex is in prison for the length of his sentence. Hex demands a handwritten letter from Phelps explaining the whole scheme as well as Hex's innocence. Phelps isn't too happy with this request but relents and provides the document.

An hour later we find Jonah Hex, saddlebags over his shoulder, storming down the stairway at the hotel, Emmy Lou trying to keep pace. She keeps asking where is he going, who is he meeting, why does he have to go, but Jonah merely brushes her off, saying that he can't explain and that Emmy will probably be a whole lot better off without Jonah Hex in her life. Emmy loses it, shouting that she probably WILL be better off if she finds a man who cares for her instead of just being a stand-in for a wife that walked out. Hex replies that it ain't true but Emmy says that it is and then Jonah rides off.

Two weeks later a Western Pacific locomotive pulls up to a water tank to take on more water. However, when the fireman pulls down the water chute he finds that Jonah Hex is right there, politely asking for the payroll money that's in the mailcar. The fireman complies and then Jonah rides off with the loot. 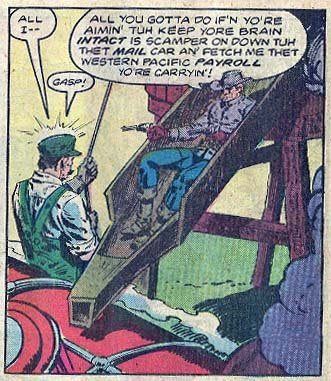 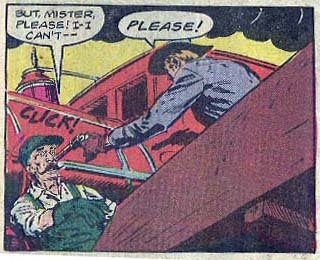 In the days that follow, Jonah robs a stage and the Western Pacific Railway Express office and there is quickly a $5,000 bounty on his head. Late one night Jonah hunkers down in his camp and is suddenly apprehended and taken to jail.

Two weeks later he is declared guilty of four counts of armed robbery and gets twenty-five years in the state pen.

That evening, Mei Ling is feeding Jason supper when her brother, Mei Wong, comes in waving a newspaper around. The headline proclaims that Jonah Hex is guilty and Wong gives forth with a wonderful "I told you so" speech, telling his sister to fall to her knees and pray that the evil blood in Jonah's veins don't also run through those of her son. Ling demands that Wong leave.

Also that evening we find Emmy Lou reading a similar paper, but she refuses to believe it and she is not about to sit back and let the man she loves rot in prison!

The next morning, Jonah is delivered to the prison where he is issued his stripes (#26150) and encounters the head guard, Bull Kozrak. Kozrak, being a concise kinda fella, explains to Jonah just exactly how the pecking order works in the prison by punching Jonah square in the chops.

Later at dinner, Jonah is talking to another prisoner about the low quality fare being served. The other con, explains that the warden and the guards skim money off of the budget, buy garbage with the remainder and go home happy.

The next afternoon, Jonah and his new buddy are breaking up rocks when the buddy collapses from the heat. Jonah goes to his aid, but Kozrak tells Hex to step away. Kozrak pulls out a whip to help persuade Jonah, but Jonah grabs the end of the whip and lands a hearty left onto Kozrak's jaw. Just as the second blow lands, a chain is thrown around Jonah's neck and while three other guards hold Jonah, Kozrak beats the wholly living hell outta Jonah Hex. 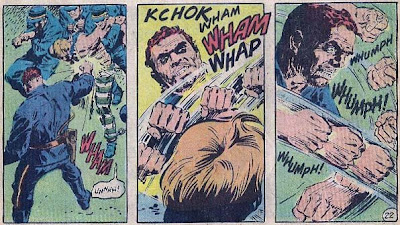 Later a couple of guards drag Jonah down a long cold hallway and throw his bloody broken body into the light-less hole of solitary confinement. 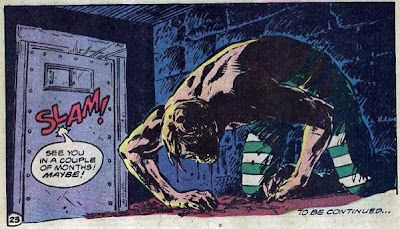 Statistics for this Issue
Men killed by Jonah - three
Running Total - 397
Jonah's injuries - knocked on the head with a pistol and beaten to a pulp
Timeline - This issue covers about 47 days from start to finish. One point references 'several days' so I went with seven. There are a few problems with pinpointing the year for this in the timeline:
1) The Western Pacific Railroad started operation in 1903.
2) I'm still struggling with getting the timeline correct as to when Emmy Lou fits in. With Emmy appearing at the end of the Cassie Wainwright revenge saga (which was supposed to take place in 1874) as well as after Jonah's wedding (probably in 1875 and PRIOR to the Cassie saga), I'm just really beside myself plugging dates onto things. UPDATE: After revisiting the marriage timeline and deciding that the Cassie saga DOES take place after Mei Ling leaves, I will place this in the regular continuity and place this one probably Feb of 1878.

Let's say that at a minimum of a week passed since the last issue in the continuity (#72), we now stand at almost two months from the end of that issue.

Storywise, this is where Fleisher really gets the ball rolling, throwing in almost every character in the Hex universe and the continuity is pretty much intact from here to the end of the run in issue 92. The pacing on the stories is good and the drama of the relationships between Hex/Emmy & Hex/Mei Ling keeps building.

My only gripe was this. Obviously Phelps is working for Turnbull. So, rather than concoct this elaborate ruse to jail Jonah, why didn't they take the unconscious Jonah and rather than take him to Phelps, just toss him into a the prison with the corrupt warden and guards? He would never have gotten out. With a corrupt system owned by Turnbull, no trial was needed.

Next Issue: RATS!!! Both the four-legged and two-legged variety.
Posted by Dwayne "the canoe guy" at 6:00 AM

Ah, the old "framed for a crime, so that he can go undercover in prison" story! Yeah, there' a real flaw to this scenario, since I assume the Governor, could simply just fire the Warden and guards and appoint new ones, if there really was a problem. Jonah may be one heck of a gunfighter, but he's not the smartest bullet in the belt, if you get my drift.

Actually, that's not true, he's smart enough most of the time.