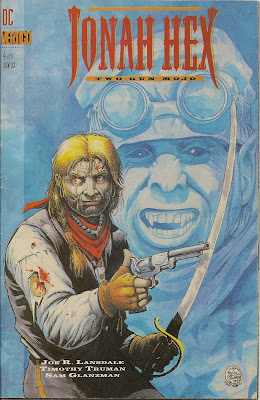 Night- 30 Miles West of Nacogdoches Texas. Doc Williams slices noses and ears from the corpses he has, mixes various liquids into a bowl, dumps in several powders, and then, while invoking the Dark Elder Gods, he urinates into the mixture. Then he spits into the bowl, strikes a match and touches it to the bowl, resulting in an explosion powerful enough to knock Williams off his feet.

The pumpkin-headed midget gathers up the brew and they take it over to the barrel containing Jonah Hex. Williams takes a hose hooked to a funnel and shoves it into Jonah's mouth while expounding on how he learned the recipe to zombie-juice in Haiti (or maybe Texas?!?). The mixture is dumped into the funnel and it slides its way into Jonah's gullet. The bowl empty, Williams has the barrel resealed and we learn that Hex has been playing possum. Hex quickly shoves a finger down his throat so he can vomit up as much of the horrible bile as he can.

The barrel containing Jonah is strapped to the wagon and Williams tells Hex that he will be a mindless automaton by tomorrow night. During the night the wagon continues on its travels, Jonah sliding in and out of consciousness.

Next morning, Williams opens the barrel to see how Jonah is doing, but Jonah isn't entirely 'pickled' yet. Williams starts to gloat and asks Jonah if he knows who shot Slow Go, WILD BILL HICKOK!! That's who!! Williams relates how he traveled to Deadwood, South Dakota in 1876. He had just come from Haiti and had not yet purchased his wagon in New Orleans. He was wanting to study how Indians conjured up storms and he runs into Hickok in a saloon.

Hickok, however, isn't impressed with Williams and literally boots the "Doc" out the door and into the mud. It was then that Williams swore vengeance, however, it was Jack McCall that stole that delight from Williams. But the Doctor was not easily deterred and that night dug up the body of Hickok and discovered that even though he was shot in the head, the cowboy was still alive.

That night Williams, using a book that he got from a preacher in Waco, concocts a brew and shoves it down the gullet of Hickok, turning Hickok into a mindless, obedient zombie. Time passes and Williams buys the wagon and recruits, through bribery, assault, or kidnapping, the
rest of his motley band. The 'good' Doctor then takes his sideshow on the road and learns
that Zombie Hickok never misses a shot, is very strong and agile, but, sadly, very very
RIPE!

The Doc stops his rambling and the wagon to relieve himself in the woods and while the troupe is setting up camp, Jonah takes advantage to kick a hole in the side of the barrel. However, he didn't realize the wagon was parked on the edge of a very steep hill and... 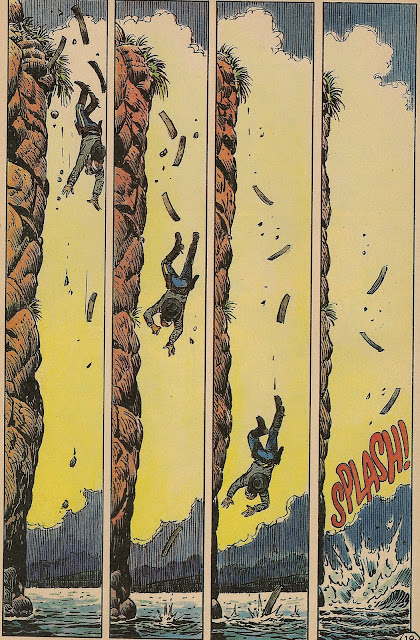 Of course, the river does help cover Jonah's tracks and provides him with a means of transportation (as well as a meal in the form of raw rattlesnake). Jonah ends up clinging to a log and washing up on shore some unknown distance and time later. He is found by a farmer and his son. They pick up the soaked and tired Hex and ask him about his scar... 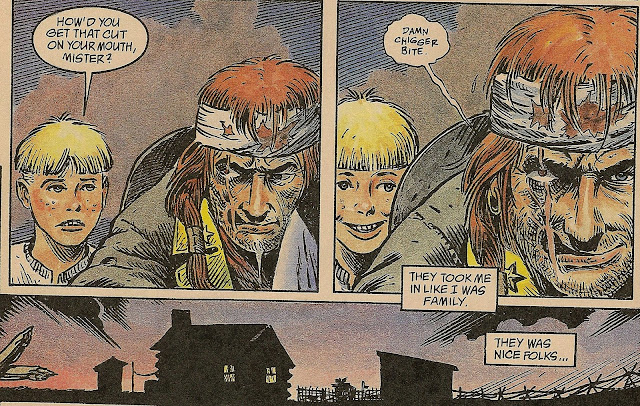 Jonah stays with them a few days, regaining his strength. He is loaned a horse, pistols and some cash and told that his face is on some wanted posters. Jonah rides off and ends up in Lubbock where he finds several fliers for the Wagon of Miracles. He also finds a cowboy wanting to make some quick cash by bringing him in. That ends in the way that we have come to expect. However, Hex is not catching up to the Miracle Wagon and tracks them across Texas and into New Mexico.

Out in the desert he comes upon some Apaches who are torturing a black Union soldier.  Jonah takes careful aim and shoots the soldier in the head, ending his misery, but inflaming the anger of the Indians who take out after him. Jonah ends up killing a few, but they eventually shoot his horse out from under him. Jonah holes up and gets surrounded but one mounted Indian gets too brave and Jonah takes advantage of it.... 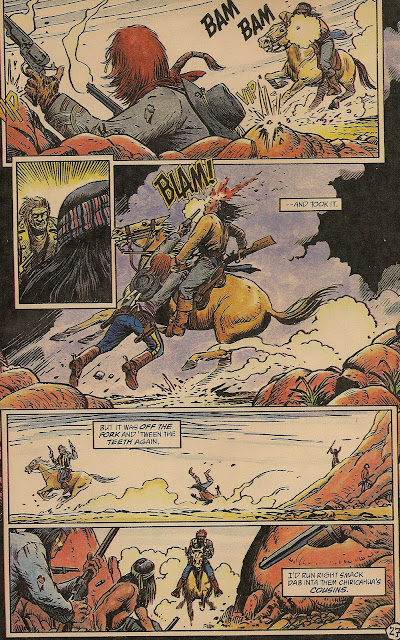 Jonah is once again making a run for it and turns the wrong way into a canyon, again getting a horse killed. He slides face first down a hillside and ends up... 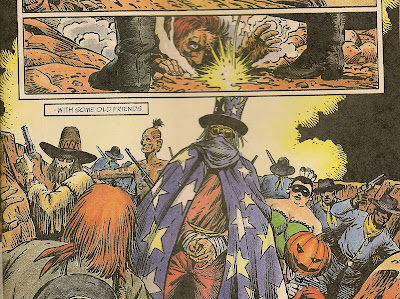 Jonah, Williams and the freaks, and a Union Calvary are in a hole in the desert, surrounded by angry Apaches.


Statistics for This Issue
Men Killed by Jonah - 6
Running Total - 502 (432 past, 55 future, 15 Vertigo)
Jonah's Injuries - 'Pickled' and falls off cliff
Timeline - Unknown how long this issue takes, but I'll toss out a couple of weeks, just for grins.

This issue is almost like two books. The first is the dark rantings of Doc Williams (which I don't really enjoy) and once Jonah escapes we're back to the tracking and rough/tumble/shooting ways of Hex the bounty hunter. Needless to say, I enjoyed the second half of the book more. I'm actually looking forward to...

Next Issue: The final stand-off and the Disgust-O-Meter pegs out at 11!!