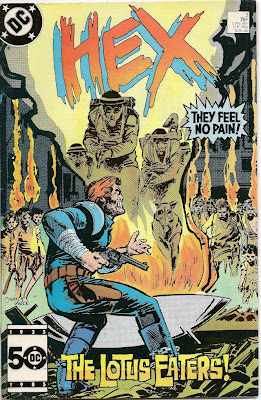 Jonah has stolen a motorcycle in his escape from the Needle and is currently being pursued by a hovercraft and two other motorcycles. Jonah bravely guns the bike and jumps across a gorge and his two cycle pursuers are unable to make the leap. The hovercraft is closing in and the pilot is reporting his status to Needle HQ when Jonah unlimbers his pistol and with two shots quickly dispatches the pilot into the great beyond.

Jonah rides for quite some time across the desert wasteland of Washington state and finally comes across a town (if you can call it that). There are several people in the street and on the sidewalks who have set up charcoal grills and are sitting next to them in a state of stupor. However, there are a few thugs of sound mind who realize that Jonah's bike would be worth several thousand soames. Three of them decide to take on Hex and steal the bike.

A fight ensues but we are able to watch the fisticuffs not only from our vantage point, but also that of the folks laying in the street. Through their drug induces stupor the fight appears to be either two large rams butting heads or clowns boxing in a circus ring. Jonah knocks out the last of the crooks just as a hovercraft lands. A slightly overweight man in a horrendous yellow shirt jumps out, introduces himself as Barnaby Blossom and offers to help Jonah escape from the gathering crowd.

Jonah takes him up on his offer and Blossom explains that he deals in lotus blossom.

Suddenly we are in a swamp with Germans and Frenchmen from WWI facing off. The French open up with their cannons, blowing the Germans to smithereens. We are then treated to a wide angle view where we see a large glass dome on a nearby mountain. The dome contains Reinhold Borsten and several of his guests who are betting on the outcome of the battle below. The Germans retaliate with poison gas and the French don their gasmasks (and put masks on their horses) and charge back into battle.

One of the men, Conroy, identifies himself as the chief of the Conglomerate's chemical entertainment division and he is wondering why the promised attraction, Jonah Hex, is absent. Borsten explains that there has been some technical difficulties. I should also note here, that all of the guests are high ranking administrators for the Conglomerate.(more on that later)

Meanwhile, Hex and Blossom are making tracks across the skies. Blossom says that he could use someone to ride shotgun to help him get his shipments through. Blossom explains that he peddles Lotus-Blossom Pacifier, it has these incredible powers to make folks forget their troubles for a little while.

Suddenly several large grappling hooks fly up in front of the hovercraft, attempting to pull it from the sky. It's a band of roving hijackers, looking to take the shipment. A net gets shot over the hovercraft and Blossom hands a shotgun to Jonah. A couple of quick rounds later and the winches on the hijacker's trucks and shot to hell and Blossom and Hex escape.

Back at the Needle, Borsten is ranting and raving about trying to complete his soames project while surrounded by idiots. Suddenly he collapses and the doctor orders that Borsten be taken to the rejuvenation bubble, stat. The doc says that Borsten's ongoing travels require that he spend more and more time in the bubble.

Some time later, Blossom and Hex land in another town. Blossom says that he's gonna show Hex the ropes and he hands Hex an air breather, while donning his own. They tote several bags of lotus out of the hovercraft and start a fire, tossing the lotus into the growing blaze. Several locals show up and stand in the rolling smoke. Blossom says that the best way to expand his territory is to give away the first few bags of lotus and he's forced to do it because the Conglomerate is always upping his quotas.

Jonah notices a young boy wandering off, muttering that he is the birdman. The boy is heading for a huge pit. Jonah yells a warning, but  the boy pays no heed. Jonah pulls out his knife, cuts a nearby rope, fashions a lariat, lassos a girder and swinging, grabs the boy just as he topples over the edge.

Once Jonah gets the boy to safety he has determined that Blossom is a dangerous man. Hex grabs a huge tarp from a junkpile and tosses it on the fire, extinquishing it. Blossom goes nuts with rage, ripping Jonah's mask off and then making a run for the hovercraft. As Blossom takes off, Jonah starts suffering the effects of the Lotus smoke but is able to jump onto the top of the craft as it lifts off.

Blossom tries to shake Hex off, but Jonah ends up crashing through the sunroof. Blossom pulls out a crossbow, but Hex delivers a right hook. Blossom hands back an uppercut and Jonah pulls some quick ISB-Fu (aka kick to the head). Blossom staggers backwards into the hovercraft controls, causing the craft to flip, throwing Blossom out the busted sun roof. 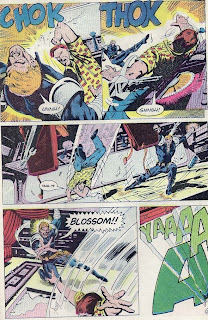 Blossom plummets to his death, but slams into a building girder. He manages to hang on, screaming for help from the drug addled crowd below. However, they are having delusions and are of no help at all. Blossom slips and falls to his death.

Meanwhile, Jonah is still in the hovercraft and the whole thing is completely out of control, with the ground rushing upwards....


Statistics for This Issue
Men killed by Jonah - 4
Running Total - 445 (428 past, 17 future)
Jonah's Injuries - Just a fistfight or two, no big deal
Timeline - Looks like this is day two of Jonah's time in the future.


I wasn't all that thrilled with this issue. We learn what Borsten is doing with all the armies from the past, however that are still several things unexplained: soames, why Borsten needs the rejuvenation bubble, what is the Conglomerate, what happened to Harris? This advanced the story (via mysteries) enough to keep you coming back for the next issue, but as far as action, it was kinda lame and limping along.


Next Issue: (Mr. Fleisher, will you do the honors?) The Worms crawl in, The Worms crawl out, The Worms eat your guts and spit them out!! (Yup, that was at the bottom of the last page)
Posted by Dwayne "the canoe guy" at 6:00 AM

Yikes.
And for the record: I live in Seattle and have never eaten Lotus Blossom, dealt in soames or watched WWI Germans gas anyone.

We have plenty of meth, indian casinos but geoducks in place of cattle. What we don't have are the Sonics...

In the interest of our shared comic title, and civil discourse we will not discuss the arrival of the Sonics in OK.