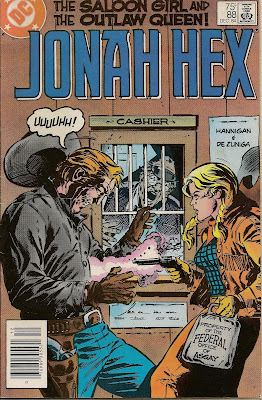 What was lost is now found!! I located issue #88!
The story starts off with Jonah Hex holding a wanted poster of Emmy Lou. The sheriff asks if Jonah knows the girl and Jonah declares that he has never seen her before. Leaving the sheriff's office Jonah is called out by four tough looking dudes who immediately open fire (they should have kept their mouths shut & just killed him.)

Jonah dives behind some crates and then shoot one of them in the throat. The others get a bright idea, lighting a newspaper on fire, tossing it across the street & setting the crates on fire. Jonah realizes that his cover will soon be gone, so he tosses a few bullets into the fire and ducks into the hotel right behind him. The bullets go off, leading the crooks to believe that Hex is still behind the crates.

Inside the hotel, Jonah Hex runs up the stairs, barges into a naked woman's room stating that he is with the hotel and he is gonna exterminate some muskrats on the roof. He climbs out the window, onto the roof, jumps onto another roof and manages to work his way across the street (?!?!) until he is on a roof on the same said of the street as the crooks. When they cross the street to check behind the crates, Jonah gets the drop on them & takes them in.

Meanwhile, Brett and the girls are having some target practice. Brett figures now that Emmy has her face on a wanted poster, she had better learn how to protect herself.

Elsewhere, at another gang's hideout, the leader of the gang (Lew) has gotten a brilliant idea. He has purchased a blonde wig and the smallest guy in the gang will wear it during their next robbery so that folks will be looking for Brett's gang instead of his.

Of course, the following day everything gets real complicated. Adrian Sterling is on a train heading west and she is talking to Temple Starr (this will be important later, trust me.) They discuss how men are the reason they are that train. Adrian is looking for her man and Adrian is leaving her man. She shows Adrian her locket that has a picture of herself & her man in it. Adrian admires it & asks if she can try it on. RABBIT TRAIL: Why do women do this? Men never say "That's a neat hat. Can I try it on?" They just ask "Where'd ya buy it?" END OF RABBIT TRAIL!

While this is happening, we see Lew & his gang jump on top of the train from an overhanging ledge. Inside, Temple is explaining that she is leaving the bar in Philly where she worked and has a job out in Willow Springs and produces the letter of the job offer she received.

Lew & his gang burst into the passenger car demanding money. One of the gang is wearing a the wig. One thug grabs Temple's handbag, she resists and they shoot her right in the face. Adrian starts screaming and they pistol whip her unconscious. 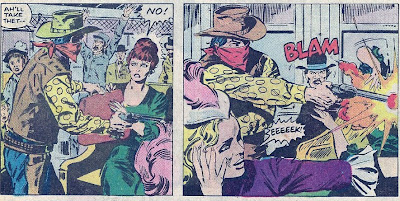 Back in town the telegraph operator gets word of the holdup, writes out the message and sends a runner after the sheriff. Jonah, sitting on the porch of the telegraph office, overhears the robbers consist of a bandit with yellow pigtails and he hightails it out to the scene in order to save Emmy from the oncoming posse.

Miles away in a doctor's office, Adrian Sterling awakens only to learn that she doesn't remember who she is or where she was going. The doc explains what happened on the train and informs her that her name is Temple, Temple Starr. He knows of this by the engraved locket around Adrian's neck and the letter offering her a job. Adrian thanks him for his time and wanders, dazed, out into the street.

That evening, back at Lew's hideout, the guys are congratulating themselves on a great haul when Jonah Hex walks in and shoots the wig wearing thug in the arm. Jonah mentions that he can't believe it "Pushin' forty like ah am, ah must be goin' soft tuh shoot him in the arm like thet."

The next morning finds the local sheriff taking the four men into custody from Jonah Hex. Jonah mentions that there never was a woman bandit and they can tear up Emmy's wanted poster. However, some men burst into the office announcing that the gang with the blonde pigtails just robbed the stage between "here & Pine Butte."

That evening, Adrian is sitting in her hotel room, trying to gather her past and determine what she will do since she doesn't even have any money to pay for her hotel room.

The next morning Brett and the girls are on the run and planning their next job. 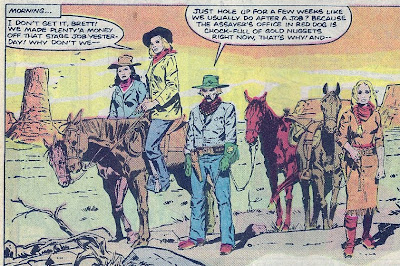 They are heading for Red Dog to rob the assayer's office & folks won't expect another robbery so soon. However, Jonah is on their tail, watching through some binoculars. Jonah acknowledges that Brett is smart for laying down a false trail that confused the posse, but that is for the best since it will allow him a chance to rescue Emmy.

Right then, in Red Dog, Brett & the girls bust into the assayer's office and commence with the robbing. Jonah is right outside the window and is waiting for Emmy to be far enough away from everyone else before he makes his move.

Back at the bar Adrian walks out in her new costume and the barkeep almost passes out. Adrian gets the job at fifty cents a night plus tips and she can make extra money on her own time anyway she sees fit.

In Red Dog the robbery is going well. Brett and the girls head out the back to load up, leaving Emmy to cover them. Jonah kicks in the front door shouting "EMMY!" Emmy spins around startled and shoots Jonah square in the chest. As Jonah drops to the floor, Emmy panics and leaves out the back door. 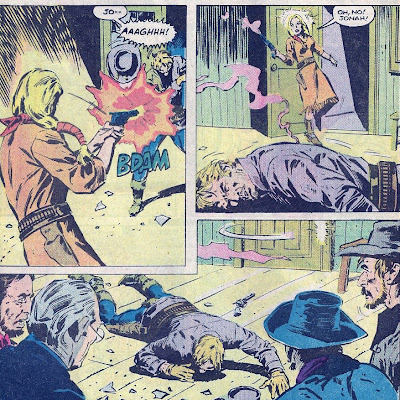 Statistics for this issue
Men killed by Jonah: 1
Running Total: 421
Jonah's Injuries: Shot square in the chest (& possibly dead. Yeah, right!)
Timeline: This issue covers three full days. I would place it still in July 1878. Jonah mentions that he is "Pushin forty." This would jive with Jonah's birthdate of Nov 1, 1838.

This story jumped back & forth a lot, trying to set up a storyline for Adrian, that would allow us some closure without just leaving her dumped in New Orleans. We get Emmy & Jonah back together, with terrible results and thankfully, we don't have Mei Ling tossed in to really muck things up. I liked that Jonah has guys just gunning after him and he doesn't ask who or why, he just shoots them & takes them in.

Next Issue: More Emmy, More Adrian, and the Return of the Gray Ghost!
Posted by Dwayne "the canoe guy" at 8:00 PM

JH#88 was the very first Jonah Hex comic I ever read, waaaay back in 1985 (I was 11), and I'll admit, I didn't understand a bit of it back then. Couldn't figure out why the main guy was so ugly, could barely understand half of what he said, and the multiple blonde gals running around confused me too. Then they go and shoot him at the end, and to me, he looked pretty dang dead...but I also got JH#91 at the same time, and he was alive and kicking there (plus the art looked better to me -- Jonah's not half as ugly when Gray Morrow's drawing him!). For a long time, I thought I was reading the issues out of order, despite the numbering (the bimonthly status didn't help either: "Why's there so long between issues when all the rest of the comics are once a month?"). Yep, never give Jonah Hex comics to an 11-year-old, you'll just confuse 'em.

Lucky for me, there was something about abut those two issues that made me hold onto them, and five years later, I went back, reread them, and FINALLY it started to sink in. And the rest, as they say, is history. :)