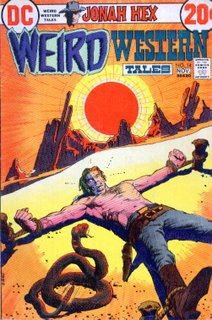 Jonah is camped out asleep when Iron Jaws, his wolf, attacks a rattlesnake and ends up getting bitten. Jonah takes the wolf to the nearest town, an hour away. Once there, he barges into a doctor’s office demanding that the doc look at the wolf. The doc explains that he is with a patient. Jonah gently sets down Iron Jaws, opens up the window and then tosses the patient out the window, broken legs, crutches and all.

The man hobbles to the nearby saloon and tells his friends, Dan & Butcher, that Jonah is in town. They wait outside the doc’s office and when Jonah leaves, they pistolwhip him and then drag him quite a distance out of town. The two men explain that they are avenging their brother’s death at the guns of Jonah. They then beat Jonah with a rifle and then lead him even farther out into the desert. They tie him spread-eagled in the sand and leave him to die alone. Dan comments that this is Butcher’s greatest fear.

Hours later, Ironjaws comes to Jonah’s rescue. Dragging himself across the desert, Ironjaws eventually chews through the ropes on Jonah’s right hand. Jonah then frees himself, but not before Ironjaws dies from exposure/thirst/snakebite. Jonah covers the wolf’s body with rocks and then heads back to town.

Once in town, he storms into the doc’s office demanding water, clothes & a gun. Once outfitted, he goes after Dan & Butcher, who have held up the express office, killed the stationmaster, & left town.

The next evening Jonah tracks down the pair & shoots Dan. As Butcher is trying to escape, he is attacked by a mountain lion. Butcher manages to shoot & kill the lion, but not before getting bitten. Butcher then surrenders to Jonah in order to be taken to a doctor. Jonah tells Butcher that it’s a four hour ride back to town & Butcher will be dead by then because the mountain lion was clearly rabid. Butcher then start begging Jonah to stay with him so he won’t die alone.

Jonah grabs the dead Dan, throws it on Butcher, telling him that his brother will keep him company. Jonah rides off as Butcher lies there pleading “…Hex… Hex…don’t leave me…” 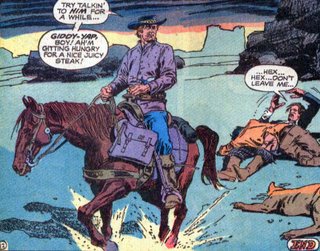 Stats in this issue

This issue also contains “The Replacement” by John Albano and “Anachronism” by Don Kaar with art by Alex Toth. This last story is very nice in that the pages are landscape, you have to turn the book sideways to read it.

The Hex story is fair. Jonah doesn’t do a whole lot, the story is basically about Jonah & his relationship with the wolf. Personally, if that wolf can track Jonah across a desert, drag himself out there and then gnaw through the ropes before dying, Jonah needs to find someone that can raise that beast from the dead. How bas-ass would that be, Jonah with a zombie wolf? 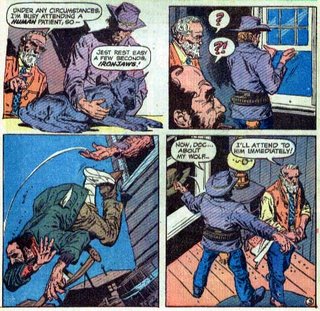 This issue shows that Jonah will repay a kindness from an animal, but casually toss an injured man out a window. The ending seems kind of rushed but it still seems fitting that Jonah is heading off for a steak as a man dies. It also appears that he is giving up the bounty that would have been posted on Dan & Butcher. Also, leaving a man to die of rabies is pretty cold-hearted, but then tossing the rotting corpse of his brother on top of him? That gives me chills. I can imagine that the vultures would be lining up to that buffet. (The DC dept of health requests that you use a clean plate for seconds)

Some of the timing of the story seems rather awkward as well. At the opening of the story, Jonah is asleep for the night, an hour later in town, the doc is seeing a patient and the saloon is open. I’m not sure what time this is supposed to be, but “hours later” Jonah is in the desert & it appears that the sun is coming up. Once Jonah is tied down, the sun is high in the sky. When Jonah gets back to the docs house, it is dark once again.

Next Issue: a lying sheriff and a pit of quicksand