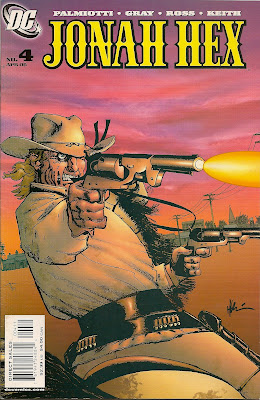 Six armed men stand outside a log cabin, demanding that the inhabitants exit the premises. Frustrated, the men shoot the cabin to pieces and then storm in to find.... nothing. Standing in the middle of the cabin they uncover a trapdoor in the floor and as they are about to open it, Jonah Hex rains down death from his hiding place in the rafters. The men dead, Hex jumps down into the pools of blood as a man, Chako, crawls out of the trapdoor.

Turns out Chako is a bounty that Hex has been dragging along for two weeks since Chako is wanted alive. Chako keeps pleading his innocence and offers Hex bribes of women, other bounties, almost everything because he keeps talking non-stop.

When Hex and Chako finally make it to Tall Pines, Colorado, Chako is gagged and then turned over to the local sheriff. The mayor thanks Hex for bringing Chako in but Jonah notes that the mayor has no money in his hand. The mayor explains that the bank is closed but he will have the money first thing in the morning. Hex explains that he will take Chako back until the money is produced and demands that the mayor open the bank and get the cash.

Just then a young woman comes running down the street and slaps Hex across the face and spits in his eye. The mayor appears and apologizes for that is his daughter Mayleen. Mayleen is mute and is severely upset by what has transpired. The mayor states that the very mention of Chako's name drives her to tears and he instructs two of his men to take her back to the hardware store and settle her down. As she is escorted away, she throws a pleading look to Hex.

The mayor thanks Hex again for bringing Chako in and Hex says that he doesn't appreciate the mayor hiring Aubrey McHane and his boys as insurance and that they are all dead. The mayor asks if Hex is moving on and Jonah replies that it ain't none of the mayor's concern.

Jonah heads off for the saloon and gets into a poker game only to have Mayleen interrupt it with a note that states: Chako is innocent. I helped Chako escape. You brought him back. His blood is on your hands now. She runs out and Hex follows close behind.

Jonah catches up to her and asks "Are you saying that Chako DIDN'T rape you?" (Rape Reference #2 for the series) He demands to know what really happened but she won't reveal it. Hex tells her to get to someplace safe. 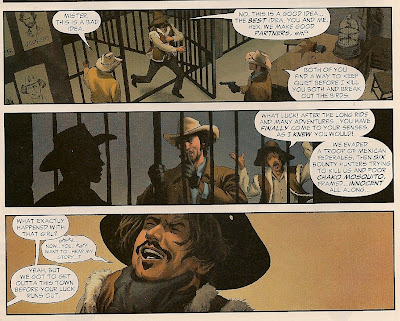 Jonah then goes to the jail and breaks Chako out, locking the deputy in the cell and demanding that Chako shut up and tell him what really happened. As they exit the jail, they are greeted by the mayor and three gunmen. The mayor gives instructions to tie and gag them, 'soften their dispositions' and have them ready to hang as soon as possible.

Hex wakes up sometime later to find himself in a cell with the still-talking Chako. Hex breaks Chako's nose to shut him up.

We then find the mayor locking Mayleen in a storeroom in the hardware store to keep her out of the way, but Mayleen starts working at getting the key out of the lock using a hairpin.

We next find the town gathered around the gallows, Chako and Hex gagged with nooses around their necks. As the mayor rails on about their crimes, Hex for helping a prisoner escape and Chako for raping the mayor's daughter we find Mayleen kicking open the storage room door, grabbing a rifle from the store and rushing to the gallows. 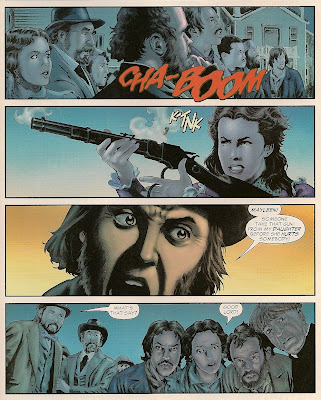 The lever is pulled and the trapdoor drops as Mayleen opens fire. The crowd turns and the mayor screams for someone to disarm his daughter, but the town is standing agape at what they see. Mayleen has taken the barrel of the rifle and written in the dirt:

MY FATHER DID IT

The mayor tells the executioner to throw the next lever, killing Hex. The townspeople shout for him to stop. The guy starts to pull the lever and a shot hits the gallows next to him, the townspeople have pulled their weapons and are now demanding Hex be released. They ungag Hex and he confirms Mayleens story, saying that Mayleen helped Chako escape. Mayleen runs up and hugs the hanging body of Chako.

The gallows trapdoor springs open and the mayor hangs dead next to the man he had killed... BUT WAIT! Chako is still alive! They cut him down and he starts talking ninety to nothing, thanking Hex  but asking where Hex is going.

Jonah mounts up and rides off into the sunrise muttering under his breath, "Somewheres quiet."

I enjoyed this issue, more for Chako than anything else. The idea of someone talking non-stop was played to a perfect comedic tone, especially the scene where Chako's nose gets broken. I enjoyed other little touches of Jonah not wanting to sit with his back to the saloon door; demanding that the mayor open the bank to get the money; the executioner apologizing for hanging Hex. The art was good, (the people are all distinct and the expressions are fantastic) the color and dialogue were great. A nice above average issue.

Wow, that was one heck of a weekend! Spent two whole days and part of another doing a video shoot for our children's church services. This shoot was on location in Seminole, Oklahoma and west of Cogar, Oklahoma. (Ya get triple points if you know where Seminole is, quintuple points if you have even HEARD of Cogar.) I got to play a Grandpa to a twelve year old girl, teach her to fish, and explain the love of Jesus to her and how the Holy Spirit can help her with life.

I have to admit, hanging around twelve year old girls is something (me being a father to two now-20 something boys) that can wear a fella out. It was lots of fun and I'll post links to any video of it that pops up (I might be posting some next week)

Meanwhile, here is a trailer for an upcoming series that I was also in, called Space Station Alpha.