Just a slight diversion before we jump back into the Jonah Hex books. Marvel Premiere was Marvel's answer to DC's Showcase, a series of one-shots to see what would work and what. In 1980 they produced this western, written by Peter B. Gillis, penciled by Gene Day, and inked by Tony DeZuniga. Here the, is the story of Caleb Hammer. 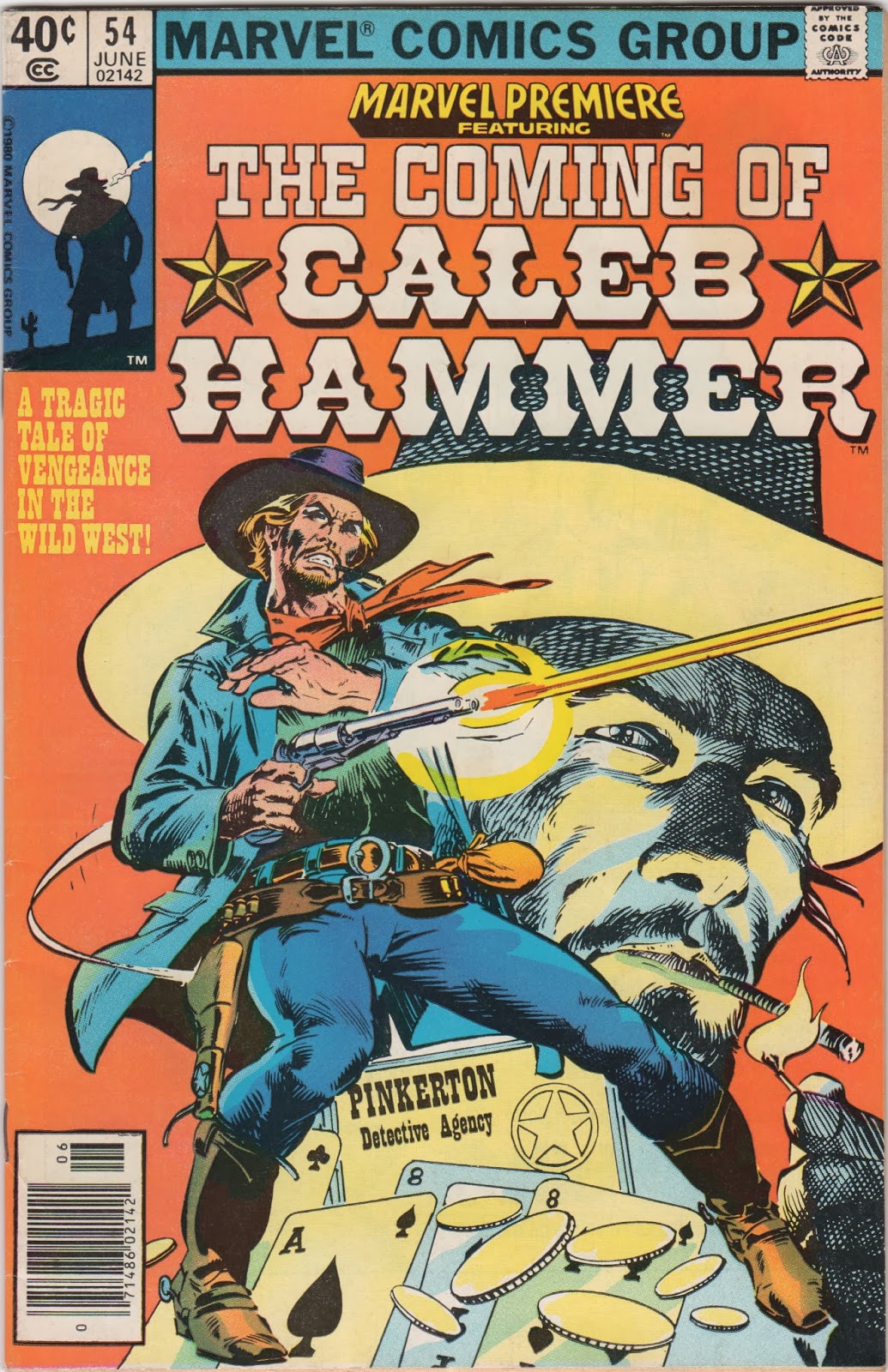 Our story starts in 1890, in Manacle, Wyoming. A young buck walks up to a man in a bar and calls him out. The young man draws and the man, Caleb Hammer, rushes him and knocks him clean out, tossing him into the street. The sheriff comes by, wanting to know what is going on. Hammer explains that he is with the Pinkertons and that he is looking for two men, Crawford McKie and Jake Lovelace.

They took part in the campaign to capture Geronimo but after that they took up bank robbery, murder, and other things. The sheriff explains that they did come through, but Manacle wasn't worth their time and they moved on, up in the valley. The sheriff offers Hammer a drink, but he declines and moving on.

In the morning, Hammer is riding into the valley when the youngster that he trounced the night before comes riding up, saying Hammer won't get away with treating him that way.

FLASHBACK: 1885. A Union soldier storms into a woman's bedroom, calling her Molly. The woman isn't Molly and the soldier shoots her dead, claiming that she cheated on him. A crowd gathers and Hammer is among them. He realizes that his wife has been killed and the soldier, drunk out of his mind, starts shouting that he had the wrong hotel room. Hammer had been training for the ministry and his faith has abandoned him.

Present day: The young gun demands his chance to have revenge. Hammer dismounts, picking up a fist-sized stone. The young gun jumps off his horse and draws on Hammer, who responds with throwing the stone into the young man's shoulder, breaking it. The man goes down and Hammer walks over, picks up his pistols and snaps the cylinders off and rides off. 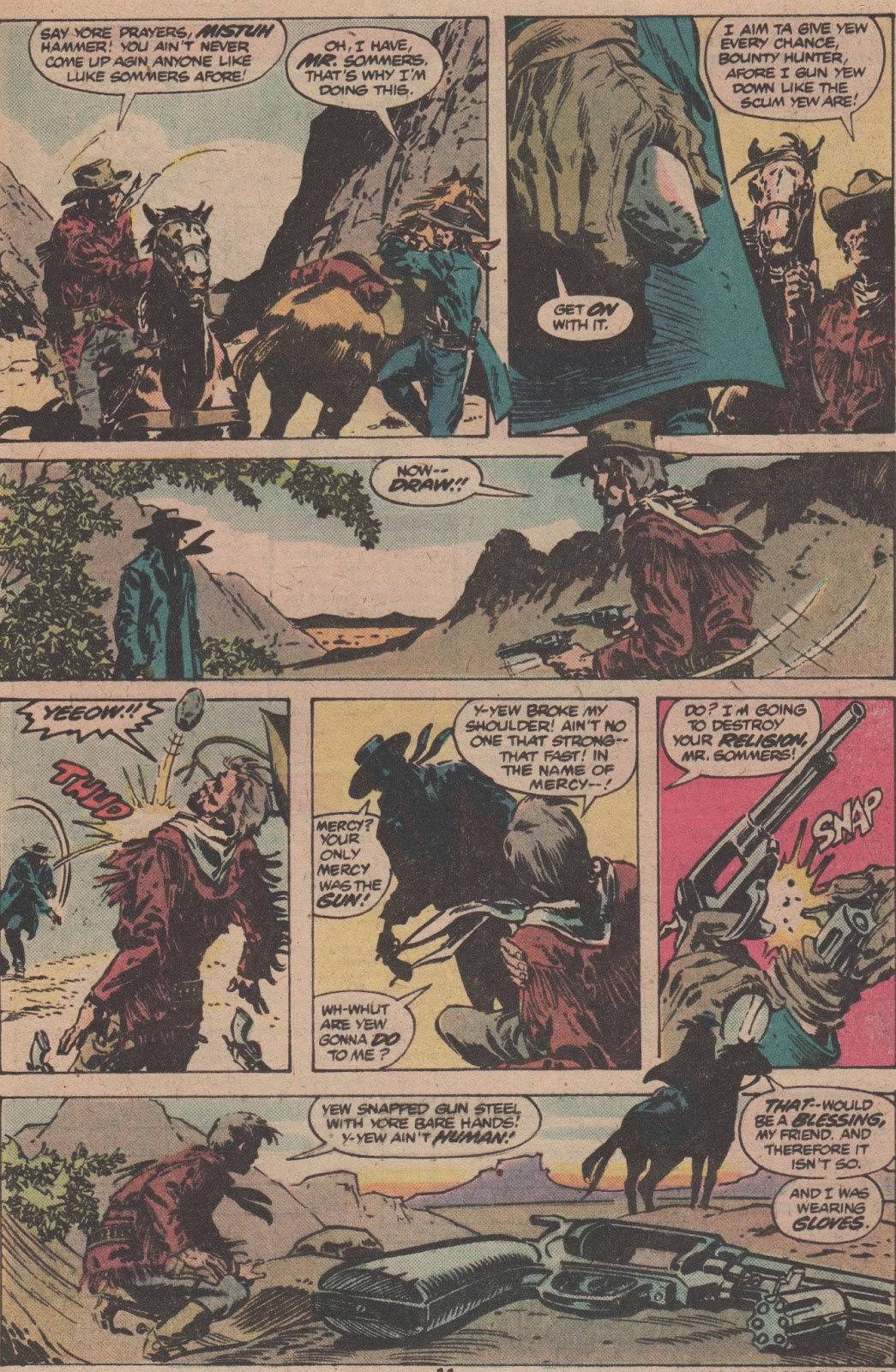 Night falls and Hammer comes upon a ranch, having followed the outlaws trail. The cabin shows signs of a struggle and when he checks the barn, he snags his boot on a tripwire and the barn explodes, he manages to grab a colt and rescue it from the flames.

FLASHBACK: 1886, the McCormick Harvesting Machine factory in Chicago, Illinois. There is a union strike and as scabs try to cross the picket line a fight breaks out and six men are killed in the riot. One of them is Isaak Hammer, Caleb's younger brother. Caleb was visiting his brother to get over his wife's death, but once again his faith crushed him.

Present day: Hammer notices that there is a cabin on the cliff overlooking the ranch he just found. He spots a reflection from inside the cabin and realizes that his prey is up there, watching the burning barn.

Inside the cabin, Crawford and Jake are sure that 'the Pinkerton' is dead, but just in case, they still have the ranch family as hostages. Nora, the wife, has had enough and demands to be let go because Jimmy has 'got himself a sickness'. The crooks ignore her.

Outside the cabin, Hammer gets closer and realizes the cabin sits on The Devil's Anvil, a solid piece of rock outcropping that offers no cover whatsoever. Hammer realizes that the only weapon that he has is..... fear. He puts his hands near his mouth and start howling like a wolf.

In the cabin, Crawford gets a little spooked but the rancher explains that there are no wolves. It must be the Indian wolf-spirit whose lands they have defiled. Just then they look out the window and spot Hammer outlined against the full moon, his arms raised and draped in some cloth. Just as quickly he vanishes.

FLASHBACK: 1888, Montana. Hammer bursts into a cabin to bring in an outlaw and ends up shooting the man in the shoulder but a huge snowstorm moves in and they are snowed in for five months. Sadly, the shot man dies and when Hammer leaves the cabin he is a man completely devoid of any faith at all.

Present day: The rancher explains that the Devil's Anvil was an Indian holy place and the two crooks actually helped capture Geronimo. The Wolf-Spirit wants to punish them for that. Hammer pulls his ghost stunt once more and the crooks are getting more and more edgy, starting to believe the rancher.

It is then that Caleb Hammer realizes that it was the fear that HE instilled in the crooks that led them to kill Jimmy. Hammer picks up the boy's body and takes him outside...to look at the stars. 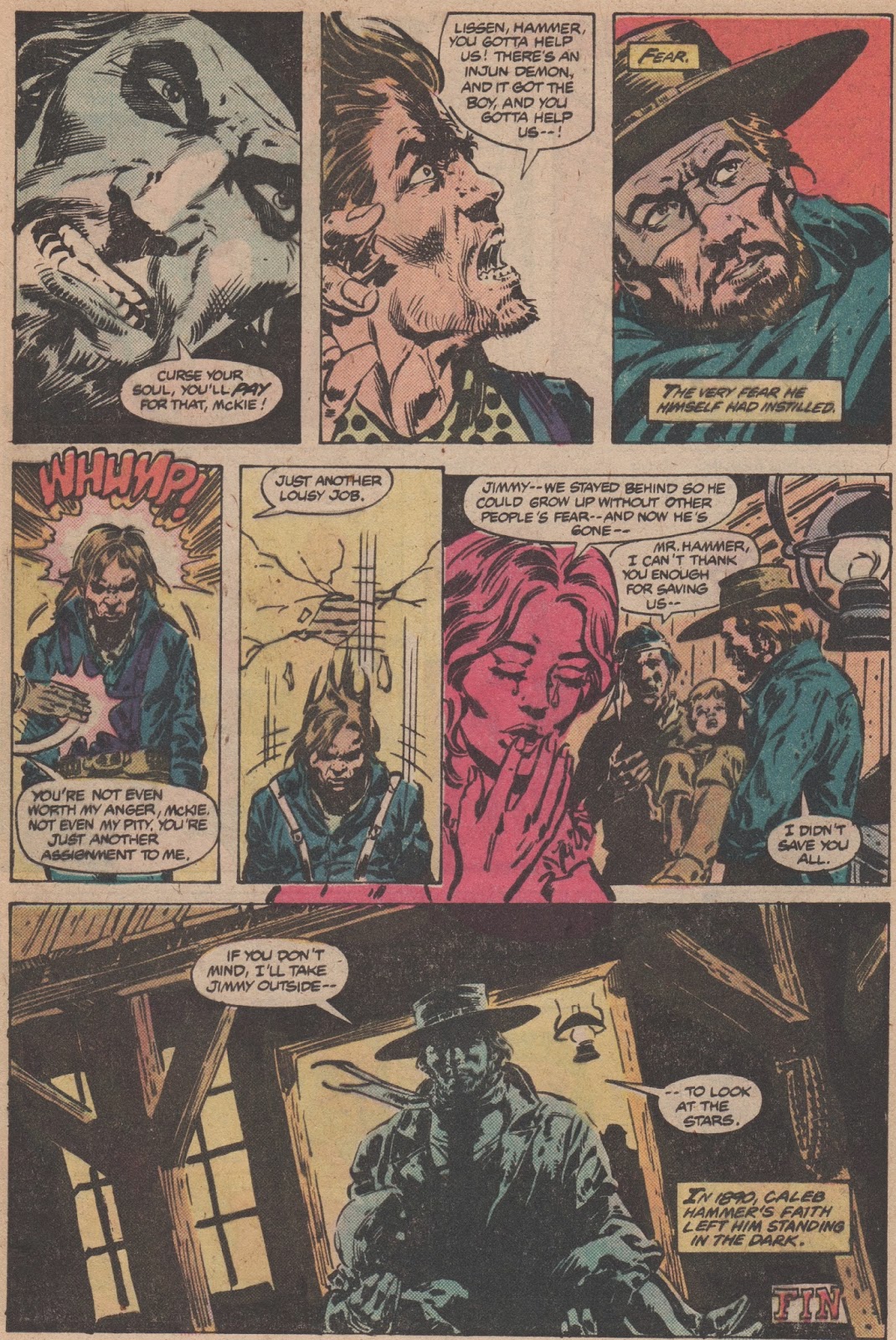 Impressions:
Thirty four years ago I loved the heck outta this book. Re-reading it, Marvel was doing their spin on Jonah Hex with some slight twists (unscarred, not a bounty hunter). Caleb Hammer was a man whose life was full of tragedy but he didn't turn to booze and he didn't shoot to kill. He just turned his back on God and busted guns with his bare hands. Of course, Marvel got DeZuniga to do the inks so that it would even LOOK like a Jonah Hex book.

A lot of this artwork was muddy and in some places they had white letters on a black background, darn near unreadable on newsprint

I can understand why this never took off, the Western was pretty much dead at this point except for Jonah and he only had five years left as a Western himself. It would be fun for Justin and Jimmy to 'borrow' this character from Marvel and clash with Hex once he gets back to his own time.

All Star Western, A brief look.

Until then, you kids stay offa my lawn.
Posted by Dwayne "the canoe guy" at 6:00 AM 2 comments:

I ain't dead & I'm coming back

There have been rumors, but I am not dead.

Tuesday I will be back in the saddle and on the keyboard talking about All-Star Western, Hex, and other stuff.