Back again, from gaming

Whew! Made it back from Boardgamegeek convention and that was a heck of a time. 4 days, 950 people and 2450 boardgames. I think I played more games this year than I ever had and I only played 4 games on Saturday.

There were tons (literally) of new games there and I normally don't grab the newest shiniest thing but I did pick up Tobago, 2-4 players, where players are building atreasure map and racing across the island to be the first to dig it up. It's a well planned game that will have a lot of replayability.

Pandemic, On the Brink is an expansion for Pandemic and it adds more rolls for the players, an extra virus and even a bio-terrorist. The best thing is that it has 4 scenarios so you can mix/match new parts as you like. It's a pretty good bang for the buck.

The Adventurers had a good idea, put all the Indiana Jones movies into a box and it worked well for the first play. You're trying to get past the crushing walls, outrun the huge boulder, jump across the lava, swim the river, make it across the crumbling bridge and grab all the treasure you can. But on a second play I realized that I really wanted some way to impact the other players and it just wasn't there.

There were lots of other things that I played and I may talk about those later. Will get back into Jonah Hex before Thanksgiving, then we roll into Lovely Wife's birthday and spiral into Christmas. It's gonna be a wild month around here.
Posted by Dwayne "the canoe guy" at 7:57 AM 1 comment:

Well, I finally got my books, a whole months worth and I have to say that I am in love with the Doom Patrol. It's everything that I wanted the John Byrne reboot to be but even better. Toss in the Metal Men backup & I'm reading this book twice, back to back.

Besides that, I'm gearing up for BGG.con. Yup, .coN, not coM. BGG.con is the convention held every year by Boardgamegeek.com. Four big days down in Dallas, hundreds of boardgamers from around the globe (literally, around the globe) gather to play boardgames. I'm not talking Monopoly & Risk here. We're talking games that you've never seen and probably never heard of, but you should go check these things out right here.

I'm getting games ready to sell at the Flea Market, doing inventory to insure that Panzer Blitz has all 300 cardboard chits, that Battle Masters has all the Orc warriors and that Fury of Dracula has no split corners. On top of all that, I have Stamps to list on ebay for my wife, a monthly game night to get ready for, a trip to pack for, my wife to kill and Gilder to frame for it. (Sorry, got a little carried away there.)

I will be getting to Jonah Hex #87 before I leave and I'll probably post some unofficial thoughts on Six Gun War.
Posted by Dwayne "the canoe guy" at 10:11 PM 4 comments: 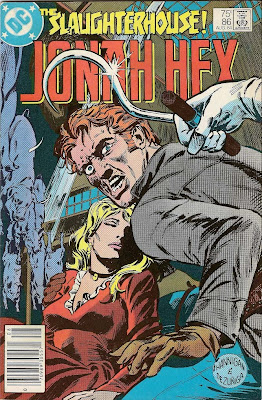 Jonah is all duded up while he and Adrian Sterling step out into the New Orleans nightlife. Adrian is walking with a cane, much like the doctor predicted last issue and as she and Jonah are seated in the fine French restaurant, Jonah overhears the folks in the booth next to them.

Of course, this being a French restaurant and it being in New Orleans, the patrons are bad-mouthing other customers within earshot. Jonah calmly dons his hat, walks over to the table and assists the patrons with their meal... 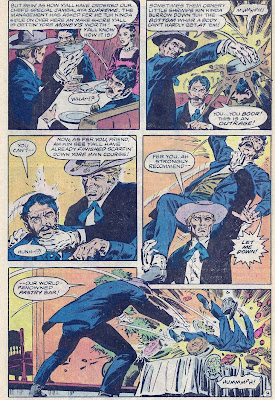 The staff of the restaurant don't take kindly to this ruckus so Jonah grabs a nearby cart and serves up a side helping of whoop-ass casserole.

Meanwhile, several hundred miles away, The Gray Ghost finally makes it back to his cabin & his son. The horse ride has reopened his wounds and he makes his son swear that the Gray Ghost will never die.

A week later, back in lovely New Orleans, papa Sterling is having a row with his hard headed offspring regarding her choice of man-friends. Mr. Sterling brings up that Jonah is still married to a Chinese woman but Adrian counters that Jonah hasn't seen her in quite some time. Finally papa Sterling asks if Adrian loves Jonah and she honestly says that she doesn't know and despite everything Jonah, uncomfortable and confused in New Orleans and tracked by the Gray Ghost, is still better for her than the cowardly Clifford Mapely who engineered her kidnapping.

During all of this, Jonah is riding back to Adrian's grandmother's house (where he & Adrian are shacking up) and as he crosses a rope bridge he suddenly spies the Gray Ghost atop a hill on the far side. The Ghost opens fire, forcing Jonah off his horse and returning fire. The Ghost manages to shoot one of the ropes holding the bridge and as Jonah stands there shocked, the Ghost pierces the other rope, sending the bridge swinging, Jonah's horse swimming, and Jonah hanging on for dear life.

As Jonah tries to climb up the bridge, the Ghost nails Jonah Hex in the left wrist, sending Hex right into the drink. Jonah stays underwater for as long as he can and manages to elude the Ghost.

And, of course, at that same moment, several hundred miles away, Brett is planning his next bank robbery with Camille, Sandy, and Emmy Lou. As they head out for the robbery, Brett hands Emmy an unloaded rifle and before they leave Brett reminds Emmy of the possibility of her getting locked back up in the closet and then seals the deal with a lingering lip-lock.

Also at that time, Adrian finally comes home from her talk with papa and she finds the front door ajar. She walks in calling out Jonah's name but the Gray Ghost grabs her from behind and drags her away.

Shortly thereafter, Jonah returns to the mansion and finds... 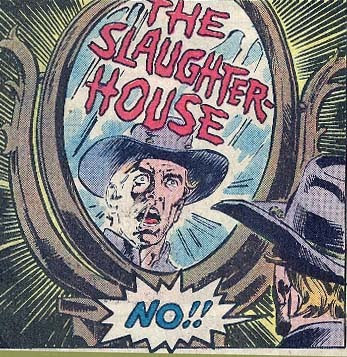 We suddenly switch to a bank holdup, already in progress. Brett is forcing the teller to hand over the cash when an overly brave customer suddenly grabs Emmy's unloaded rifle. Emmy cries out and her bandanna falls, revealing that she is a woman. Brett quickly solves the problem by killing the customer and the entire gang rides out of town as hard as they can.

That night, back in Louisiana, Jonah is approaching the only slaughterhouse in the area. He decides to not use the front door and scales to an upper window. As Jonah sneaks inside, the Ghost appears out of the darkness and pumps two slugs into him. The Ghost closes in on Hex but Jonah suddenly grabs the Ghost & they topple through a railing into the packing crates below.

The Ghost grabs a meat hook and as he raises it over his head, Jonah whips out his pistol and pops the Ghost a good one. As the Ghost tries to flee, he throws a crate at Hex and Jonah administers another lead pill, knocking the Ghost backwards amongst the crates. Jonah finally finds Adrian and unties her. When they go to drag the Ghost's dead carcass back to town they find...... 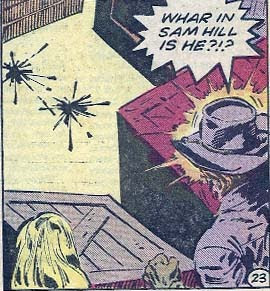 Statistics for this Issue
Men Killed by Jonah - 0
Running Total - 417
Jonah's Injuries - Shot in the wrist and shot once in the gut.
Timeline - This one covers a week plus some. I'm not sure where it falls regarding last issue since the doc said it would be some time before Adrian was up & about and I'm not sure how long it takes an injured man to ride several hundred miles. Let's say that amounts to another week, so this issue covers 15 days. That would place into July, 1878.

There was a lot of hopping around in this issue, Fleisher has a lot of subplots to keep going. I'm glad he didn't throw in Mei Ling, that would have been way too much. The ending seemed quite rushed with the sudden vanishing act pulled by the Gray Ghost, but we all know that we will be seeing more of him (father & son).

I've been slowing down on my reviews and I think it's because there are only six more issues of Jonah Hex left before the switch to Hex. We'll still have a lot of stories to go through with Hex, the Vertigo titles and then into the new ongoing series, but it's just bittersweet as we wind up the run on this book. I know my mood will change as we move on. I'll try to keep the tears to a minimum.

Next Issue: More Emmy Lou! More Adrian! and just for fun a train gets blown to Hell!
Posted by Dwayne "the canoe guy" at 6:00 AM 1 comment:

A little something for what ails ya.

I've been sick with congestion for a few weeks now (not the flu, no temp) and while shambling around the house I once again uncovered some comics history that I have been hoarding. But first, a little back story...

Decades ago I was in the Boy Scouts and our local troop saved newspapers to recycle for money. We got an average of $10 a ton back in the 70's. (Big money & even bigger work). Our troop got a call from a local farmer who wanted us to get rid of all the newspapers that were "takin' up room" in his shed.

The shed was an octagon shape about 20 feet across and 20 feet high and packed to the rafters with newspapers! Sadly, about 90% of the papers had dissolved into worthless slime, but while we were cleaning it out (& having a ginormous bonfire) I managed to salvage the Sunday funnies from Joliet Herald. I've held onto that for 30 years now and here is what caught my untrained eye even way back then... 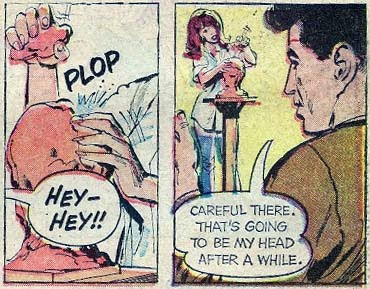 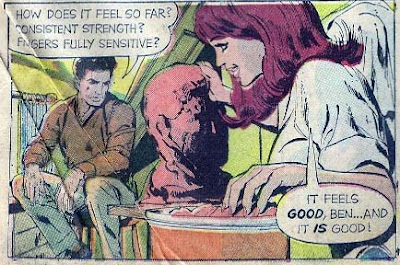 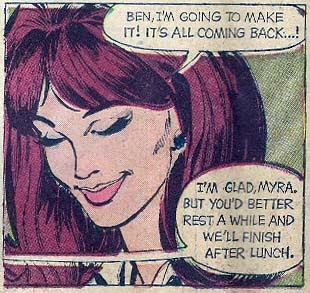 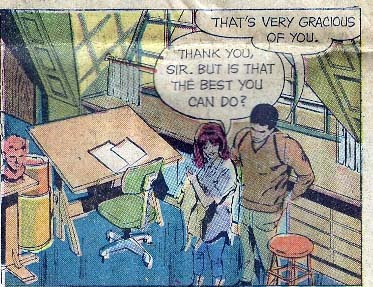 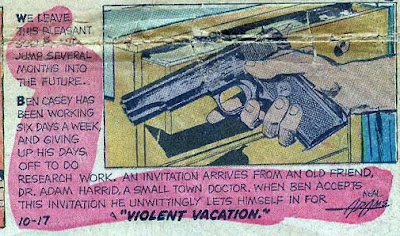 Did you catch that at the end? Let's take a closer look....

Ben Casey, draw by Neal Adams! Brought to you from the way back past of October 17th, 1965. I'm thinking I should have this framed.
Posted by Dwayne "the canoe guy" at 8:02 AM 2 comments: