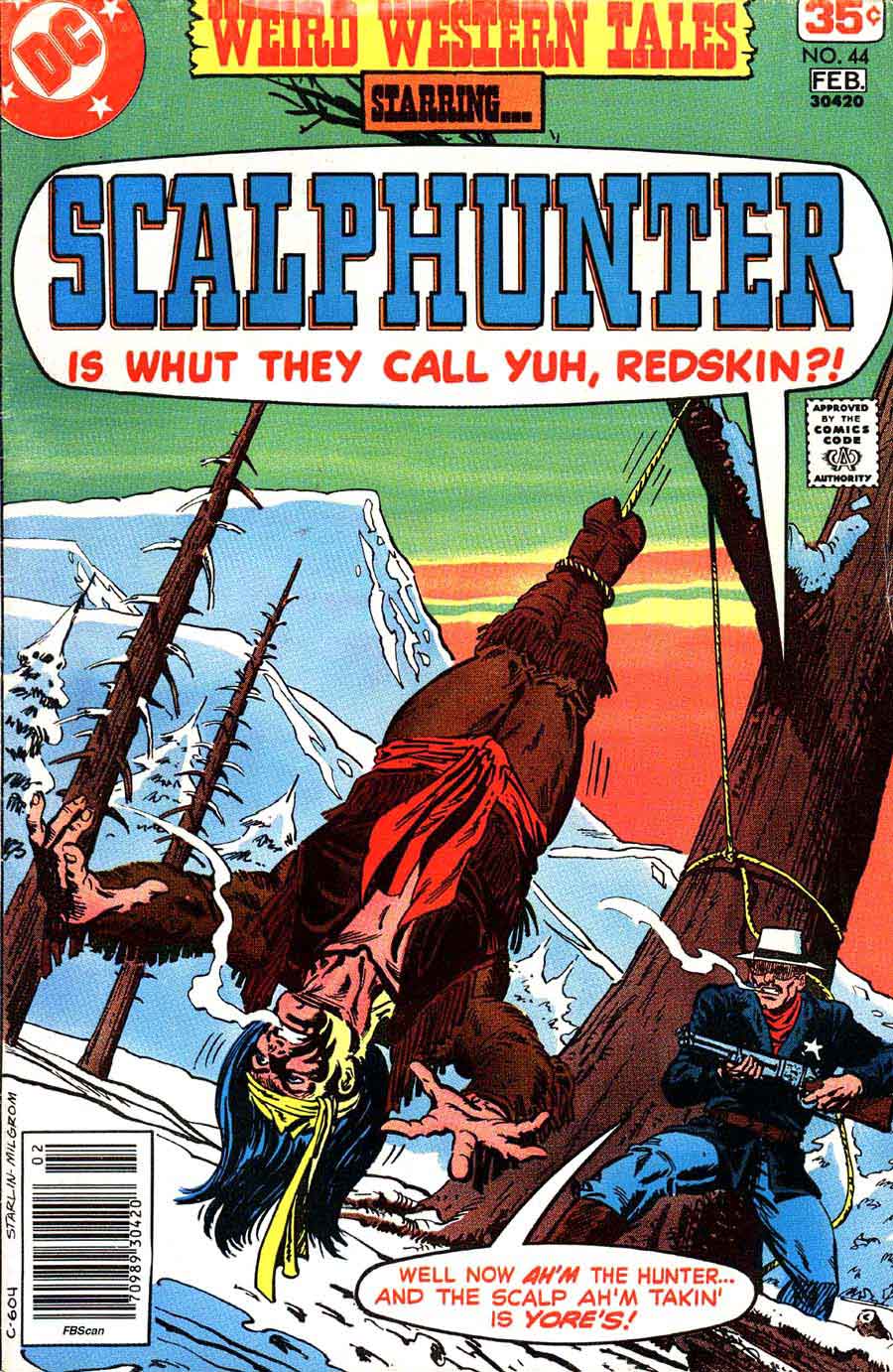 Scalphunter is hanging upside down from a tree after being captured by Sheriff Brett Harley, brother to a bank robber that Scalphunter killed as revenge for killing an Indian child. Just as Harley is ready to pull the trigger, two riders happen upon the scene. They are Obadiah Jethro, head of some Quakers heading to California, lead by their wagon master Travis Barnes.

Harley tells them to butt out, but Jethro wants to be sure that Scalphunter is taken to trial. At the point of Jethro's shotgun, Harley cuts Scalphunter down. Then they all head back to the wagon train. The wagon train stops for the night and Scalphunter is tied to a wagon wheel. When a woman and her younger brother attempt to give Scalphunter food, Harley slaps her down into the snow. Jethro steps in to sort things out.

Jethro gets everyone to calm down and tells his folks that as long as Harley doesn't actually harm Scalphunter, they should leave well enough alone. Later that night, Davey, the brother of the clapped girl, brings Scalphunter some food and water. After making Scalphunter promise to not escape, he cuts the bonds holding one hand so he can eat. Of course, things being what they are, Harley shows up.

Harley, doing his best Pappy Hex impersonation, is drinking and pulls off his thick leather belt and beats Davey senseless with it. Scalphunter is helpless and watches as Harley drinks his bottle empty and then breaks it on the wagon. Harley is advancing on young Davey with the broken bottle. Finally, Scalphunter reaches behind him and grabs a pitchfork off the wagon behind him and throws it into Harley, killing him instantly. Everyone hears Harley's dying scream and they come running. 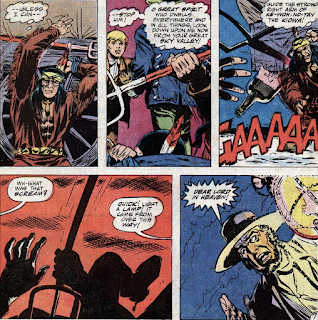 Davey explains what happened but Travis Barnes has had enough, he wants to kill Scalphunter then and there. Jethro will have none of it and demands they take Scalphunter in to the authorities so everyone needs to go back to sleep. Scalphunter tells them if they sleep, they will not wake for he has seen the signal fire of Apaches on a nearby cliff. The fire signals a war dance and that they will attack at dawn.

There is a lot of fear and argument amongst the wagon train but Jethro decides to travel at first light. Scalphunter protests and Barnes clubs him unconscious with a rifle butt.

Just as the sun starts to break over the horizon, a lookout is tending the fire. Suddenly an arrow pierces the coffee pot and two more arrows pierce his sternum. The Apaches descend onto the wagon train, killing, scalping, and setting the wagons alight. As quickly as they arrived, they ride off into the snow.

From the carnage emerges Angela (the slapped girl) and Davey. Barnes comes running up. Seems he was out early looking for firewood. Davey sees something moving under a burning overturned wagon. It is Scalphunter. They right the wagon and free Scalphunter and then they realize that all the horses are dead. Scalphunter offers to lead them to Fort Onondaga (more on that later) but it is a two day walk, so they should get moving. Barnes doesn't want to be led anywhere by an Indian so Scalphunter takes a cue and leads Barnes to...PAINVILLE!

Angela breaks up the fight and says they HAVE to trust Scalphunter. Barnes agrees but he will turn the Indian in to the Fort authorities.

Later, as they are walking through the snow covered forest, a mountain lion leaps out of a tree and attacks them. Scalphunter draws his knife and prepares to vanquish the huge cat, but Barnes panics and unloads five shots into the cat. Davey goes bananas, telling Barnes that every Apache in the county heard those gunshots and now they are in deep doo-doo. On top of it, in the excitement, Angela twisted her leg and can't walk.

Scalphunter tells Barnes and Davey to hide the cougar in the nearby brush and then they will hide for the night in that nearby cave up on the cliff. Some time later, Davey is keeping lookout with a spyglass and sees some Apaches find the dead cougar. Scalphunter asks Barnes how much ammo he has left. Surprise!! He's empty, having panicked and unloaded on the cougar. Scalphunter then concocts a plan.

We see Angela standing out on a snowy overhang, not a care in the world as the two Apaches sneak up on her from below. Higher above her is Scalphunter, Davey, and Barnes. Scalphunter will take out the first Apache and Barnes the second. Scalphunter gives the signal and jumps, boots to the Apache's face. Barnes, however, totally has a panic attack and freezes in his tracks. Davey grabs a knife and jumps over the edge himself, knocking away an Apache that was sneaking up behind Scalphunter, but suddenly Davey is in trouble so Scalphunter finishes off his attacker and then rescues Davey.

Two days later at Fort Onondaga the General of the Fort hears their story and promises to go round up the Apache. He then asks how did Ke-Woh-No-Tay come to be teamed up with the Quakers. Barnes is about to spill the truth when Angela interrupts and says that Scalphunter was hired as a guide. A few hours later Scalphunter rides off with the scalps that will prove that he has completed his Death Stalk.

Statistics for This Issue
Men Killed by Scalphunter - 3
Running Total - 26
Compared to Jonah Hex- 26 vs 28 Jonah still leads.
Scalps Taken - 2
Running Total- 12
Injuries - Dropped on his head, knocked out with a rifle butt,
Timeline - This covers about two days.

I was getting ready to write this and then decided to check my draft folder. Surprise! I had written this waaaaaay back in 2012. It always pays to work ahead! I really enjoyed this issue. The cover was great with the tilt to the cover and I always enjoy covers where they incorporate the title of the book into a word balloon. I'm a sucker for that.

Death by pitchfork is another soft spot for me. There just isn't enough DbPf in books nowadays, in my opinion. Scalphunter's offering the scalp to Davey and the steps Davey takes during this issue as he matures were other good steps in the storyline. A fine ending to a multi-issue story. We wrap it up next week when Scalphunter returns with the scalps to finish his Death Stalk.