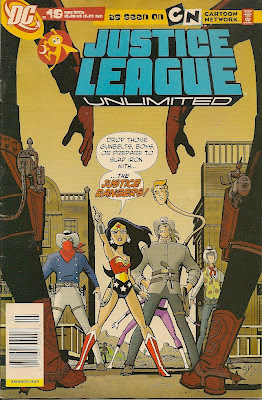 1879.
Jud Saunders rides as hard as he can across the American West to elude the men chasing him, the men with cowboy hats and ray-guns. He is just about cornered when three men come to his rescue, Bat Lash, El Diablo, and Jonah Hex.

Current Day.
On the Justice League satellite, The Vigilante and Elongated Man are helping Wonder Woman inventory the trophy room. Vigilante is admiring an hourglass when he is startled by Ralph Dibny and drops the hourglass, shattering it and opening up a time vortex.

Naturally, they end up in 1879 Wyoming right in the middle of our western heroes being chased by the bad guys. Wonder Woman is startled to see Hex, Lash and Diablo. Ralph asks if she knows these guys and Wonder Woman explains that she, Batman and Green Lantern once... "well, never mind. It's time travel. It's complicated."

The bad guys realize they are overpowered and they take off, leaving the heroes to talk over what caused the ruckus. Jud explains that he was just mining his own business playing cards in Laramie when those guys came in and shot up the place. Bat grabs Jud and asks if Jud had cheated them the way he cheated Bat in Dodge last month. Jud denies that he cheated but Bat states "There's no way you pulled that fourth ace on the draw cause I had palmed it two hands before." But Bat won't let anyone hurt Jud until he can get back the rabbit's foot that he lost in the game.

Vigilante notices that Jud's last name is Saunders and asks if he is married to Kitty Wilcox Saunders. Jud says he ain't married but he has visited Kitty Wilcox in Carson City. Vigilante starts to explain the relationship between he and Jud, but Wonder Woman intervenes and says that they can't say too much since it could cause a time paradox.

Ralph then brings up the fact that the bad guys had been shooting laser pistols. Wonder Woman asks Vigilante if his family had ever been involved with someone named Starr and he stats that they did. She then theorizes that the hourglass was destroyed in their time but the vortex brought them back to a time where the glass still exists and since it is here then they could possibly use it to get back to their own time.

Anyway, she now knows that they are facing off against the Time Commander.

It is this Time Commander who is back at the bunkhouse with his bunch of bad guys. He goes on a tirade explaining how the Vigilante foiled his plans in 2009 so he came back here to get rid of Jud Saunders, he gets weapons for the bad guys to use but Time keeps trying to correct itself. To counteract this, the Commander goes hopping through time and returns with some more advanced weaponry... heavily armed robot suits!

That night, Diablo is mad at Bat for dragging him into trying to recover property that Bat lost while cheating, Jonah is talking to Diana and telling her that they will stick around until everything is cleared up and Ralph and Vigilante are discussing meeting your own ancestors and not mucking up the Time Stream. While everyone is discussing their next step the bad guys show up in their robot suits!

Ralph springs into action and wraps himself around one of the villains. Jonah gets into a Mexican standoff with another and does his best Clint Eastwood impression... 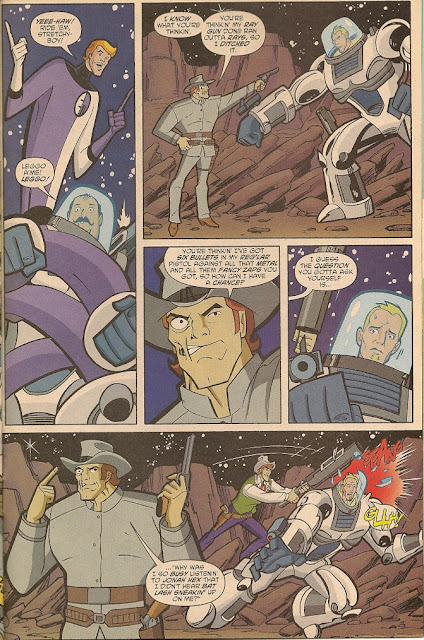 and Wonder Woman cleans up the last of them. Time Commander has been watching it all from a nearby hilltop and right before he can escape, Jud tackles him and knocks him down. Commander jumps up and states that he will send Jud back to the Dawn of Time but Jud has 'picked the pocket' of the Commander and now has possession of the hourglass!

All the bad guys are easily tied up and Wonder Woman tells Jonah how they will return to their own time..

Our current heroes return to the JLA satellite with Time Commander in tow and in the closing panels Vigilante starts feeling better about his contributions to the team.


Statistics for This Issue
Well, Jonah didn't kill anyone or get hurt, so a big zero on both of those counts!

It was kinda nice how Jonah took the whole time travel thing in stride, a nice little wink to his own adventures skipping across the time stream. The story was light-hearted, nothing to write home about, but it did a good job of giving everyone the same amount of 'screen time'. The whole story is a sideways redo of the Justice League Unlimited cartoon "The Once and Future Thing Part 1: Weird Western Tales" and that isn't a bad thing. It's nice to have this in book form.
Posted by Dwayne "the canoe guy" at 8:56 PM 1 comment:

The long awaited return.... in a bit

I've seen all the speculation on Twitter/Facebook/Interwebs about the horrible possible fates that could have befallen me and I would like to say that none of them, NONE, are true.

What does that mean for you? Well, I will be picking back up on reviews of Jonah Hex V2 and also chiming in on All Star Western from time to time. I hope to be back on once a week schedule with comics and possibly something life/gaming related (no politics, plenty of other places for you to read that stuff) but I will also be shoe-horning in Part-Time job, Travel for Work, and the BoardGameGeek Convention as well.

Thanks for sticking around and I will dive back in next week. Until then....
Posted by Dwayne "the canoe guy" at 5:56 PM 3 comments: