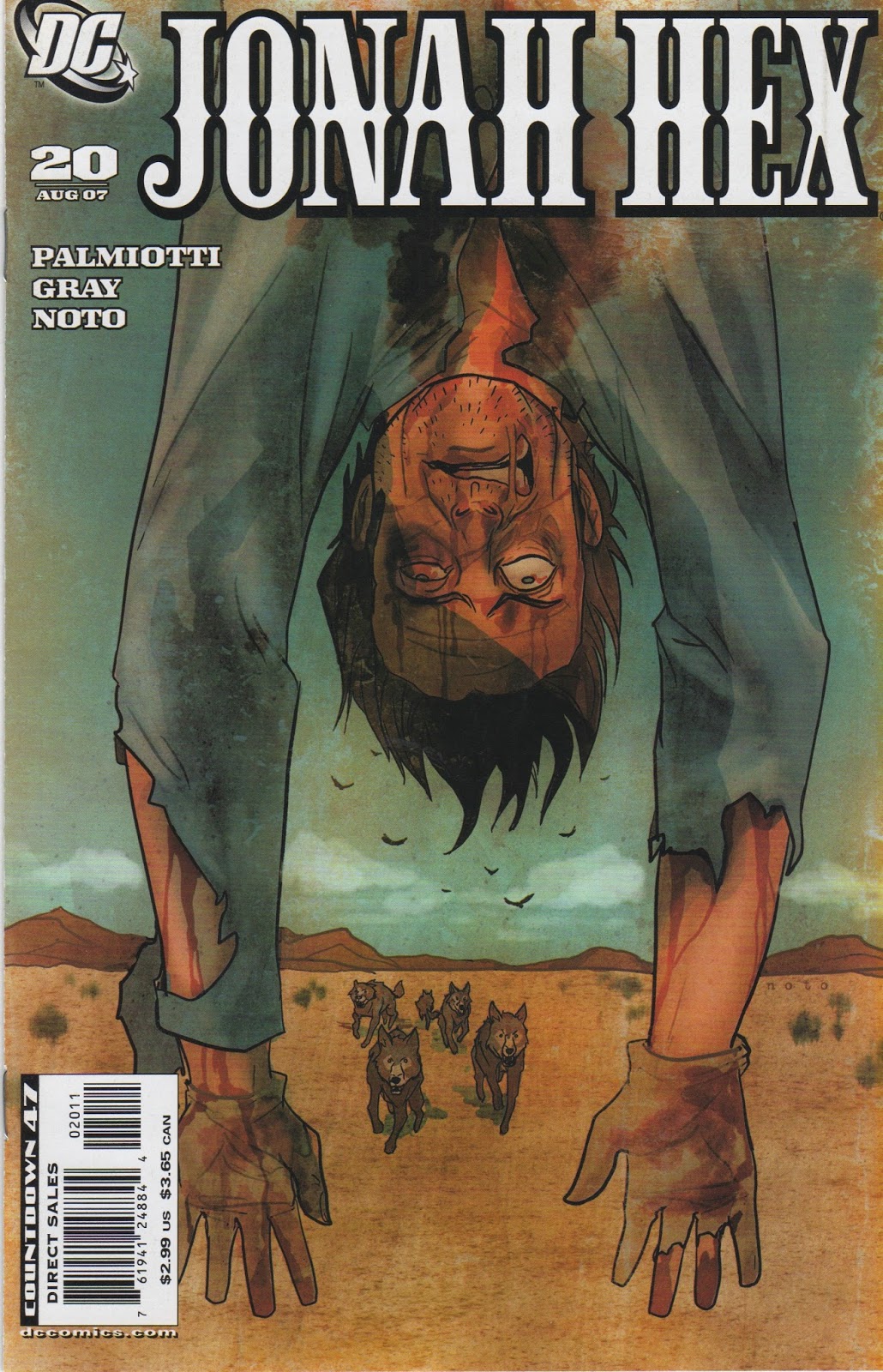 The Gentlemen's Posse
Darkness on the open plain, a small campfire burns in the night, a slumbering gunman asleep nearby. Five men on horseback ride up, silently dismount and move into the camp, weapons at the ready. They tell Hex to get up but he doesn't stir. Again they order him to rise. Nothing. They lift his hat to learn that Jonah Hex is in a stone drunken stupor, unconscious and under the effects of strong spirits. One of the men wonders if they should shoot him in his sleep. The leader orders them to get the rope from Hex's horse.

Daylight and the world is upside down. Better yet, Jonah Hex is hanging upside down, hogtied and hanging from a tree with the words "Courtesy of Mr. Park" scratched into the sand underneath him. Jonah regurgitates the contents of his stomach and the gathering vultures peck at the offering greedily. Jonah hangs there, assessing his situation when he spies the wolves trotting towards him. He tries to coax a vulture closer and finally ends up biting his own tongue hard enough to cause it to spray blood which attracts the vultures. One of the birds strays to close to Hex and he lunges as best he can, grabbing the bird's neck in his teeth and biting the head clean off.

The wolves (or are they wild dogs?) descend upon the bird's bleeding torso as Jonah takes the vulture's head in his teeth and uses the beak to start cutting away at the ropes wrapped around his chest. The rope parts and Jonah crashes down onto the bloody vulture/wild dog picnic and the dogs commence to tear into him. Suddenly a gunshot rings out and the dogs scatter. It is then that Jonah finally sees Hector, Mr. Parks henchman/partner.

Hector explains that he has a vested interest in having Mr. Parks know that Jonah Hex is dead. He does not plan on killing Hex, just giving him enough of a warning to stay out of Sulphur Springs for the rest of his days. Hector's men hold Hex down as Hector stomps on Jonah's hands, breaking all of his fingers (Kinda like what Preston did way back in the day).

That Damn Idiot
Jonah starts walking across the desert and he sees several men on horseback swiftly approaching him. Through the dust and heat he recognizes the lead horseman is none other than Chako! Hex jumps up on Chako's horse behind him and Chako requests that Hex shoot the men that are chasing them. Turns out that Chako has stolen a horse. Jonah reaches around Chako, grabs the reins and pulls the horse up short, throwing them both to the ground. The pursuers dismount and Jonah makes short work of them, headbutting and kicking them to the ground. Chako finishes one his own self.

Chako jumps up and starts thanking Hex. Jonah looks down at his busted hand, slowly forms a fist, and punches Chako in the jaw.

Chako, in his own way, ends up talking through getting punched and explains that he stole the horse because it belonged to a lovely woman named Rachel. When Hex asks about the mute girl back in Two Pines, Chako reveals that he is too handsome for just one woman. Hex commandeers a pistol and a horse from one of the unconscious men and then rides off. Chako, being Chako, decides that he and Hex are heading the same way and follows a safe distance behind, but still within earshot.

The Kindness of a Familiar Whore
The Oklahoma Panhandle - It's night and Chako is still talking as they ride into town. Jonah rides up to the saloon where we meet the blond hooker from last issue. She remembers Hex and she accompanies him and Chako into the saloon. Hex tells Chako to cheat at cards until he has enough money to buy them dinner. Jonah asks the woman her name (Dusty Rose) and asks a favor of her. When then get down to brass tacks Jonah reveals that he'll pay her $500 for a week's worth of work in Texas.

About that time, a row starts at the poker table where Chako is at. A couple of men are accusing Chako of cheating until Hex steps up and they recognize him as the guy that burnt down the Rio and they leave Chako alone.  Hex tells Chako that after tonight they are parting company.

The Explosive Conclusion
Sulphur Springs, Texas, Three weeks later. Mr. Parks and Hector are discussing their latest business venture of having added dice to their gambling establishment. Hector is suggesting adding fighting matches but Parks finds the idea somewhat grisly. Just then all of Parks men walk into the room, asking why they were wanted. Parks is confused and they produce a note that is supposedly signed by Horace. As Parks is placing something in the wall safe, he finds a note and asks Horace if he put it in there.

Hector reads it and states that they have a problem. We then hear a shout from outside and they look out the window to see Jonah Hex and Dusty Rose standing next to a dynamite plunger on the ground outside in the darkness. That's when Parks realizes that Dusty was the woman with him last night and that she has wired the room with dynamite. Hex slams the plunger down with his foot and the whole second floor of the saloon meets up with God Almighty. Bodies rain down and Dusty states "That was unexpected." to which Jonah retorts "Not bad for a whore".

This one wasn't too bad. Again, Noto's work is not the best. It was good to see several folks back in the book giving us a break from the "done in one" format, but it is still written well enough that I didn't HAVE to have read #19 or even #4 to enjoy the story. Biting off a vulture head and then using the bloody beak to cut yourself free while wild dogs tear at the dead bird's carcass.... that's more badass than 90% of what Batman has EVER done (including hitting a guy with a car battery) I really enjoy Chako and wouldn't mind seeing him pop up from time to time. The bit where Jonah considers his broken hand and STILL punches Chako was worth the price of admission. 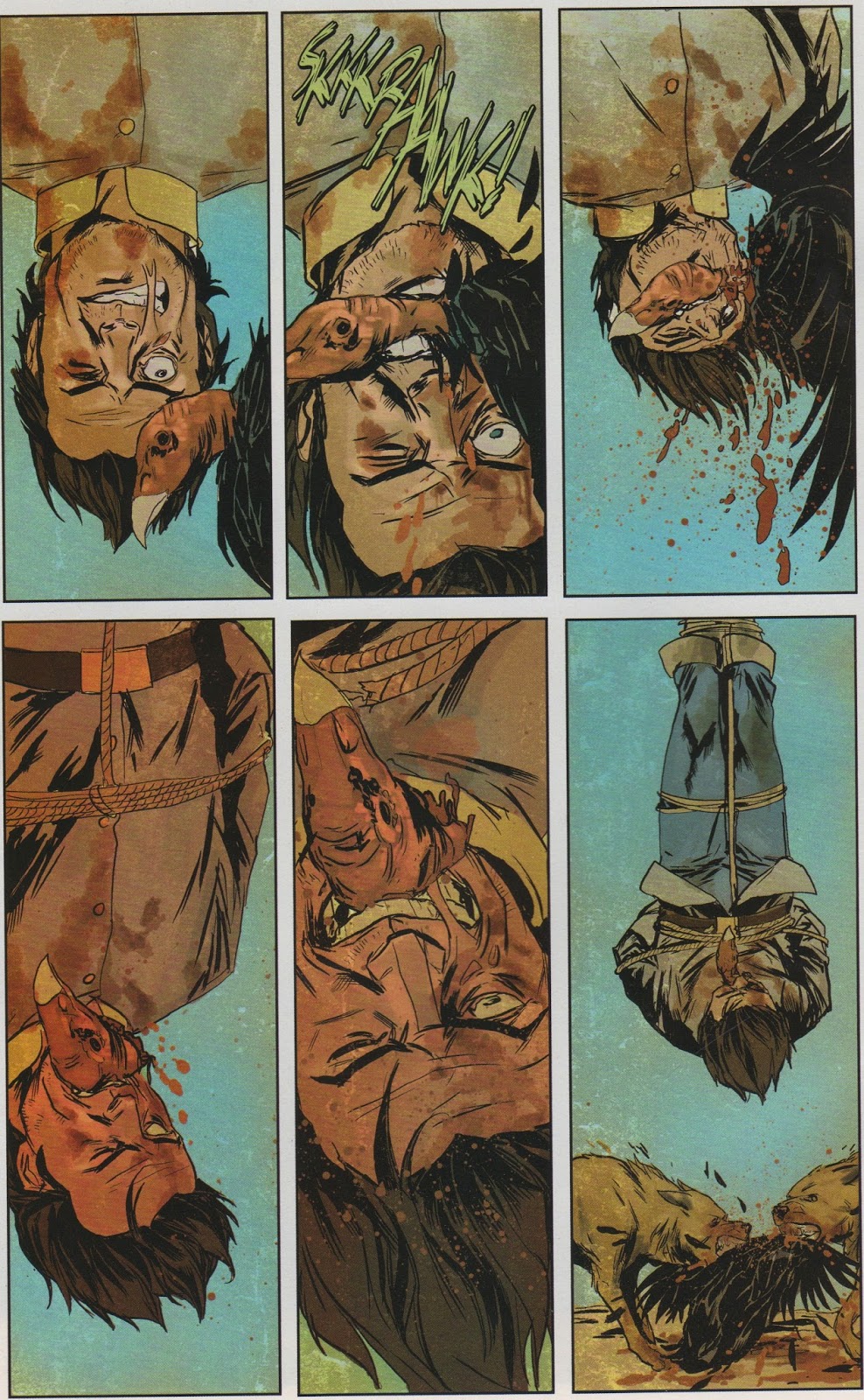 Next time: Hex encounters the secret of the Devil's Paw!