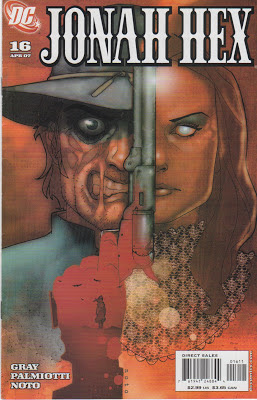 The Cruel Kindness of Children - A young girl is fishing and pulls in her catch. She calmly takes a rock and smashes in the fish's skull and then heads out. She comes upon Jonah Hex. Hex is leaning against a tree, watching a man that he has hung slowly strangle to death. The girls asks if Hex hung him and if he will cut him down. Jonah says that the man brought it on himself and that he promised Hex his boots. The girl states that it isn't very Christian of Hex and then she jumps up and grabs the man by the feet, hanging her full weight on him and thus snapping his neck. Hex replies with "They teach ya that in church?" and the girl heads on home.

The Ballad of Tallulah Black - Seven men stand in front of a log cabin, holding the entire family in their crosshairs. They state that homesteaders should have surrendered their land and they are here to take it. A woman comes out of the cabin and starts berating the gunmen as cowards and the ring-leader starts by shooting the family. The woman rushes at the men and they shoot her in the left eye, dropping her to the ground. The men burn the house and then ride off to tell the "Sergeant" that the land has been abandoned.

Time passes and the woman, Tallulah, opens her eye after being poked awake by the little girl that was fishing. The girl invites Tallulah home for supper, but Tallulah declines, saying she has bodies to bury. The girl leaves, warning that there is a bad man in the woods.

One year later - Several men walk into a bordello and they recognize Tallulah from their earlier encounter. She now has an eye patch and is doped up, sitting on a couch. Simon, the leader, indicates that he would like to have Tallulah for the night but the Madam suggests someone more lively. Simon insists and then takes Tallulah upstairs, throwing her on the bed. Tallulah can't tell if she understands her reality and when Simon assures her that he is real, she attacks him, scratching deep gouges in his face. He punches her and then drags her around the room by the hair before pulling a knife  and then everything goes black.

Tallulah wakes up to see the Madam and the doctor standing over her.

Time Doesn't Heal All Wounds - Three weeks later.  Tallulah stands in front of a mirror, her face a jigsaw of scars and the madam telling her of a man who is "a killer to the manner born" (I LOVE how Justin and Jimmy write dialogue!). She gives Tallulah some money and a pistol and the advice that this man, Jonah Hex might take pity on her since she is now as scarred as he.

Three more weeks later. Three men are hidings amongst some rocks hollering that they KNOW that Hex is out there. While they are weighing their options a stick of dynamite comes tumbling over the outcropping of rock and explodes below them, shearing off the ledge where they were perched. They fall backwards into the canyon, one getting his head crushed along the way. Hex walks up... 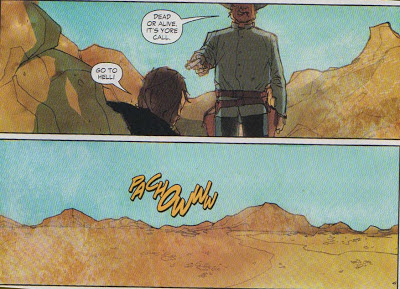 We next see Tallulah sitting under the remnants of a tree when three men atop two horses comes riding by. They are running from Hex and they stop and quickly rob Tallulah of her horse.

Out of the Frying Pan - Tallulah, now forced to walk across the desert, stumbles upon a ramshackle town and falls, literally, into the general store. The storekeeper bends down as if to take care of her....

Tallulah wakes up to finds herself tied, spread-eagle, on a bed and clothed in large dress. She hollers for release and the storekeeper walks in and says... 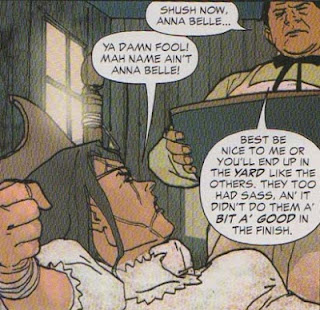 Just then a customer comes into the store and the storekeeper exits to tend to them. Meanwhile Tallulah attempts to gnaw away her bonds and then starts screaming for help. The storekeeper tells the patron that his wife is sick in the head, fighting her way against the evils of liquor. A pistol is placed against the storekeeper's head and the patron demands to see the "wife".

The storekeeper walks into the room, followed closely behind by Jonah Hex and his pistol. Hex cuts Tallulah loose, hands the knife to her and exits the room. A few minutes later, Tallulah emerges from the store, blood staining every inch of the dress. She determines that her savior is, in fact, Jonah Hex and offers him a few hundred dollars to kill the seven men that destroyed her family and her life.

Hex turns down her offer because the men aren't wanted and it ain't enough money for seven men. Tallulah states that she wants to learn how to kill them, not have Hex do it for her. Jonah ain't interested. She says that what they done to her is even worse under her clothes but... 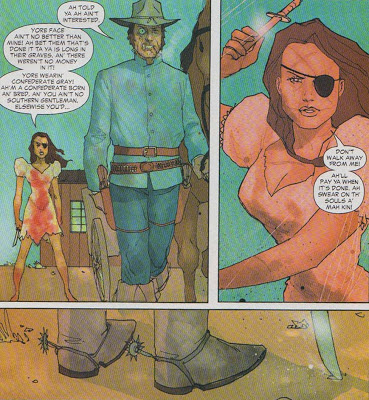 To which Jonah responds "We're gonna have ta work on yore aim."

An incredibly cruel story with some odd undertones that won't become apparent until issues 50 and 70 regarding the identity of the little girl.

And what can we say about Tallulah? A beautiful strong woman who is brutalized in ways that would drive most people into madness and who eventually will almost steal the limelight away from Jonah Hex in his own book. She is probably one of the strongest supporting characters to have come into comics in the past 10 years and sadly, in the Jonah Hex movie, she was reduced to a groan inducing fanboy Easter Egg.

This is a great story, difficult to read at times because of the terror visited upon Tallulah, and it is definitely a turning point in the story of Hex.

Next Issue: If it is even possible, things turn uglier than they already are.

When I met Jimmy Palmiotti at a con in April of 2006, he told me about a bit they were working on that became the opening scene of this story. I laughed and shook my head when he told me about it, and when I saw it in JH#16, I was tickled that I'd heard it first from Jimmy himself. With what we know about that little girl now, that memory has become even more special for me.