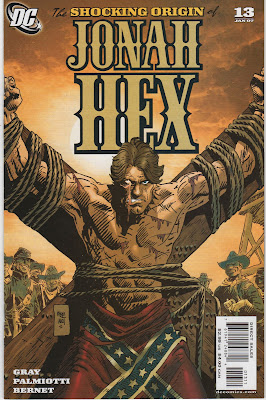 The Wyoming Badlands, 1868 - Two wagons sit under a full moon and four men huddle around a fire that is battling back the Wyoming darkness. Bix, Rufus, Pete, and Captain Fulsome are discussing their business, running stolen rifles down into Mexico.

Bix heads out into the black to relieve himself and during the continuing talk we learn that Fulsome served with Colonel Ackerman in the Confederacy. Rufus staggers back towards the fire and falls down, face first, a tomahawk embedded in his back, stuck clean through a wanted poster of the now dead Rufus (wanted for Murder, Train Robbery, and Rape(?!?)). Bix starts to panic and states "It's HIM".

Fulsome gives orders to kill the fire and cover the wagons. A rope leaps through the air and Pete finds himself yanked off his feet and drug into the dark. Bix makes it to the wagons and suddenly finds a knife in his chest, piercing the wanted poster with his likeness. Fulsome makes it to a wagon, yanks back the canvas and drags out one of two women and holds a pistol to her neck. (the woman says words to the effect "not again", so I am taking that as impending rape)

Fulsome shouts that he will kill the girl if he isn't allowed to leave. He should have killed 'him' at Fort Donelson and the camera slowly pulls back into the night.

Fort Donelson, Tennessee, 1862 - A Union wagon train is slogging through a downpour and a few Confederate soldiers rise out of the underbrush as the wagons roll by. They climb on to the back of the wagons in order to gain access to the Fort in the distance. Once inside, the Rebs attack and open the gates to the Fort, allowing the rest of their men access to the Fort. One Reb in particular seems awfully fond of using a tomahawk.

The Union forces finally get a Gatling gun set up and mow down the Confederates as they enter the Fort. Colonel Ackerman and Captain Fulsome stand over the bodies littering the ground. Ackerman looms above our downed Jonah Hex, noting that rumor has it he was raised by Apaches and that Jonah seems to have an affinity for being on the losing side. Ackerman orders all the bodies bayoneted except for Hex, of whom an example shall be made.

The Cumberland River, Sept 18th, 1862 - Day breaks and Jonah is tied to a large wooden X mounted on a raft. He has been stripped naked and covered with a Confederate flag. Ackerman and Fulsome are there and Ackerman gives Fulsome the order to proceed. Fulsome produces a large whip commences to whip Hex. Hex whispers that he will kill Fulsom but the promise rings false on the Captain's ears. He orders Hex set adrift and the raft is pushed out into the current.

For two full days and two full nights, Jonah hangs from the cross, mosquitoes and other bugs feasting in his bloody open wounds. On the third day, Jonah is sighted by a family on the river bank performing a baby's baptism.  The raft is caught and drug ashore. It is determined that Hex is alive, just barely.

Back at the house, we find Jonah on a table, with the father performing surgery on him, removing bullets, shrapnel, and maggots. The son (not the baby) asks if Hex will die. The father responds that the Good Lord saw fit to bring Hex to them so they will do what they can to save him. The boy continues to talk of the evil of Yankees. The father says that Yankees are men, differing only in their beliefs and measure of their brutality.

The boy mentions that he is scared and the father reassures him that the North will never reach this far south.

Some undisclosed time later, the father is reading in the paper that Lincoln is expected to issue an Emancipation Proclamation. Jonah staggers into the room. The father explains Jonah's situation and that with the damage to his throat, his voice will probably never be more that a coarse whisper. Jonah can stay until he heals, but once he is able to ride, he will be outfitted with a horse, clothes and a rifle.

January 17th, 1863 - During a thunderstorm, three Confederate soldiers come to the door of the house. The father opens the door.

Jonah and the boy are in the barn, saddling a horse when they hear a gunshot. Jonah grabs an axe and heads for the house. He finds the father in a pool of blood and the three soldiers grabbing the mother. She shouts that Confederates don't act tin this manner and they explain that they are not soldiers but they stole the uniforms in order to gain entry to homes.

Jonah bursts in and buries the blade of the axe into the head of one man, grabs his pistol and shoots the second. The last man reaches for his weapon and his head is deftly removed from his torso, courtesy of Jonah's axe.

Several hours later we see Jonah burying the father as the son looks on. The family mourns the loss of their husband and father. That night Jonah pays his respects and rides off.

The Wyoming Badlands, 1868 - Fulsome is still shouting to the dark the conditions of his letting the woman go. A pistol barrel gently eases against the back of his neck and we hear "Drop the gun." Fulsome states that it was Ackerman that slaughtered the Apache, Fulsome had nothing to do with it. The darkness replies "His time is coming."

Fulsome is grasping at straws now. He says that Ackerman can't be taken down, he has too many men, he'll be too angry to find his rifles stolen, he won't stop until Hex his dead. Hex orders Fulsome on his knees, places the wanted poster against Fulsome's chest and says... 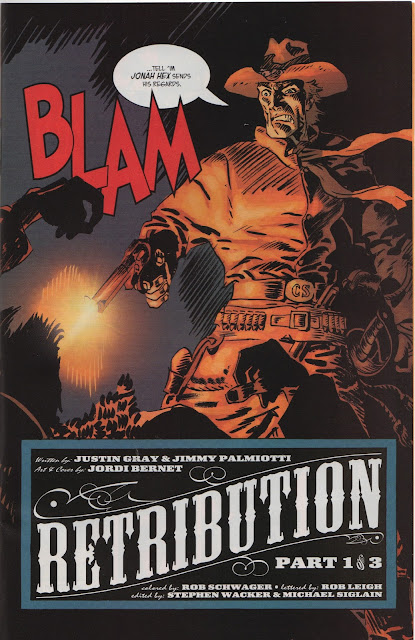 This story caused a lot of speculation when it was announced. How close would J and J stick to the Fleisher origin?  The details regarding the Fort Charlotte massacre were changed, pretty much removing Quentin Turnbull from the picture (for now) and the entire scene with the whipping brought up concerns that maybe THAT is how Jonah got his scars. So far (I'm trying to not give things away), I'm liking the story and I especially loved the explanation of Jonah's voice, something that we will never hear in a comic but allows us to cast his voice as that of Clint Eastwood.

Bernet's art, first time here, was slightly cartoony but gritty enough and fluid enough to really really work for me. In fact, I like more photo-realistic art myself, but Bernet won me over eventually. In some cases his work, cinematically, works as well as that of Ross, especially here... 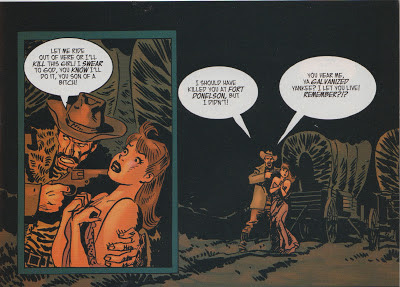 All in all, a great issue and a fantastic place for folks to jump on board and learn more about the scarred bounty hunter.

Next Issue - Woodson Hex, The Apache and two panels that sum up the entirety of Jonah Hex's life.