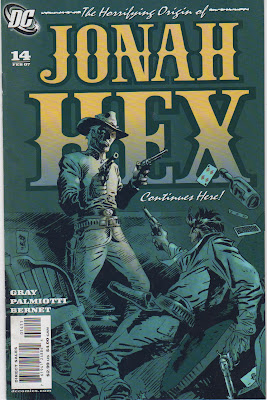 Fathers and Sons -  Jonah Hex walks into a bar and sits down with his back to the wall, facing the only door. The local deputy asks the sheriff "Was that?" and the sheriff replies that the deputy better tell the Reverend to dust off his Bible. Shortly a young boy enters the bar and walks up to a lone man leaning on the bar, drinking. The boy entreats his father to come home for supper. The man turns on the boy, but the boy persists and finally the man slaps his son to the floor as we get a very close look at Jonah Hex watching the entire drama.

Greeley, Colorado, 1851 - Jonah, as a young boy is watching his father, Woodson, load up the covered wagon. Jonah is wanting to know why they have to leave and Woodson crawls out of the wagon and kicks Jonah into the dirt. He yanks the boy up by the hair and tells him to never question him again. He continues to verbally abuse Jonah until Jonah spits in his old man's face.

Woodson knocks him to the ground an Jonah lunges for Woodson's pistol. The father breaks a bottle over Jonah's skull and then drags him to the outhouse, lifts the seat and throws his son down into the gut wrenching filth. Throughout the night Jonah tries to crawl out, falling back time after time. When he finally emerges from the outhouse, he is greeted by darkness and his father sitting there with a pistol trained on him. Woodson hands Jonah the pistol and the chance to rid himself of the abusive father forever, but Jonah only stares at him silently. Woodson gives forth some words to live by and then tells Jonah to clean up, they leave for California in the morning.

Black Hills Apache Territory, Arizona, 1851 - Jonah and Woodson pull up to a pueblo in the wagon. He begs the Apache for safe passage through their land and is told that the toll must be paid in either gold or blood. Woodson says that he aims to make his fortune in California and return to Colorado to reclaim his lost farm. Woodson glances at Jonah, the son he has never wanted and has always hated and then kicks Jonah from the wagon, stating that the Apache can have him and do with him as they see fit. Woodson will return in six months and buy Jonah back three-fold.

A medicine man stares at Jonah, whispers some incantation and the Apache tell Woodson that they have a deal.

The Black Hills, Two Years Later - Jonah is out chopping wood when he hears a scream. He finds the chief being mauled by a puma, which Jonah quickly dispatches with the axe. Jonah then helps the chief back to camp and help. Because he saved the life of the chief, Jonah is elevated from slave to son of the chief and is looked upon lovingly by White Fawn. As they walk in the moonlight, they are approached by Noh-Tante, the chief's real son. Noh-Tante has no good feelings towards Jonah and tells him that the chief wants the two of them to raid a traveling Kiowa camp of their ponies.

They both head off into the darkness and Jonah makes short work of the lone sentry. Noh-Tante grabs the ponies and then trows a knife into Jonah's left leg and then sounds an alarm. Several Kiowa come rushing out and Jonah single-handedly kills the entire tribe.

Present Day - The man in the bar pulls a knife on the boy and the bartender is trying to diffuse the situation. The man pulls his pistol on the bartender and Jonah lifts his own pistol and tells the man to drop the knife. The man turns and growls that it ain't Hex's business. Jonah replies "It is now." and places a single bullet right above the man's eyes. He falls to the floor dead and..... 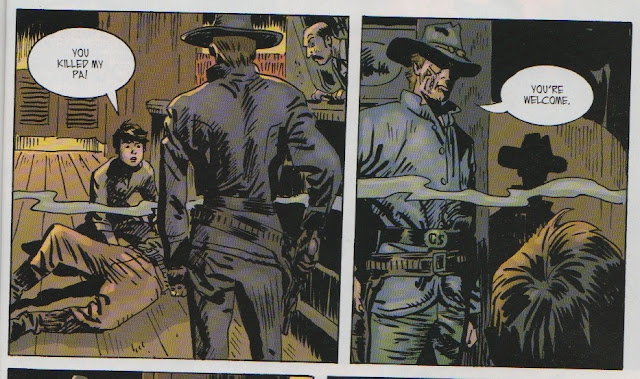 The boy grabs his father's pistol and aims at Jonah's back as Hex leaves the bar. The boy pauses and then drops the gun into the pool of his father's blood.

Hex is now on the street and six armed men approach, demanding that Jonah take them to where he has hidden Col. Ackerman's weapons. Things escalate and one man tells Hex that he will kill hex and he is dead serious. Hex replies "Got that partly right". (Yeah, I actually laughed at that line) A huge gunfight results and Jonah shoots five of the six men. The last one is about to shoot Jonah in the back when a bullet suddenly rips through the man's leg. He falls into the street as the boy from the bar walks out with a smoking pistol.

The boy says to Hex "You're welcome." Hex then finishes off the wounded man and walks down the street to his horse.

Man o man o man. This one stays very very true to the original origin and does tie back into the Ackerman revenge storyline, but over all the absolute best panels are the two where Jonah kills the drunken father in the bar and considers it a favor to the boy.

In the boy, Hex saw everything that he was and knew what would become of the lad if he didn't intervene. I can only imagine Hex was wishing that someone seventeen years earlier would have done the same and rescued him from the hell that lived/lives.

Again, Justin and Jimmy produce a book that demands to be read out loud, with the framing captions ringing in the ear so very much like actual texts from that era.

Next Issue - Jonah returns to the Apache, in more ways than one.