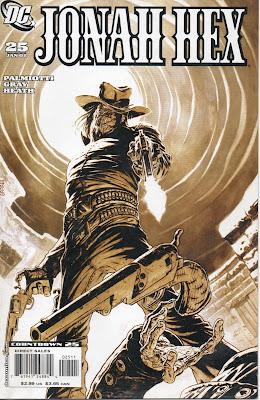 We are treated to excerpts from An Oral History on the Old West, co-written by Woodson Hex, private detective in the 1930's and 40's. During the recap of Jonah's life we see the aged bounty hunter setting up camp overlooking a desert valley. Off in the distance, dust clouds rise, driven skyward by several men on horses being chased by other mounted riders. Jonah figures it's bandits running from the local law so he takes cover so that he has a chance against the fifteen desperadoes.

As the bandits get closer, Jonah picks off one and the rest scatter. The bandits regroup, trying to decide how best to flank the unknown gunman up the rocks. Meanwhile, Jonah bides his time, hoping he can hold them off long enough for the rurales to show up. Jonah unloads his pack mule and lets it wander off into the mountains. He pulls out a photo of Mei Ling and a young boy, about the age of ten.

Jonah takes up a vantage point with his rifle. Soon enough, one fo the bandits tries to make a move and Jonah kills him. Drawing a bead with his rifle, he spots the backside of another bandit and Jonah manages to shoot the pistol in the man's holder. The bandit jumps from cover and.... thirteen left.

The bandit leader shouts to Jonah to stop shooting his men. Jonah replies that it might be safer for them to turn themselves in. The Bandit asks Jonah's name to which Jonah replies with rifle fire. Five bandits suddenly rush Jonah and ..... nine left. That's when Jonah notices that they shot and killed his horse.

The bandit leader tells Hex that they need his location to ambush the rurales. He asks Jonah's name again, announcing that HE is Jesus Escobar Ramirez. Jonah replies that he is Jonah Hex. The bandit's stare at each other and then decide Hex is lying. Everyone knows that Jonah Hex is dead. 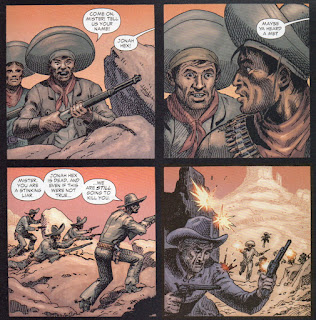 They rush him once more, managing to hit him in the left shoulder but Jonah takes down three more of them....six left. Another quick attack and Jonah takes out two more, the rest coming at him with knives. Jonah smashes one in the head with a pistol and starts punching the crap out of him to boot. The others come up, about to shoot Jonah in the back of the head when a hail of bullets cut them down. Jonah kicks his combatant over the edge of a cliff.

The rurales have arrived in time. A man leading them doesn't appear to be Mexican. The man says that Hex looks familiar, maybe they know each other? Jonah says that the man doesn't know him.

Later that evening in a cantina the man offers to buy Hex a drink, asking his name. Jonah replies with  "Mister Albano".  Jonah says that he would like to drink alone. The man introduces himself as Jason Hex. He's a tracker, helping the locals. Jason says that the Mexicans ain't against folks of mixed blood as much as the folks up north. He is half Celestial on his mother's side and his father was a bounty hunter... and that's when Jonah attacks him. 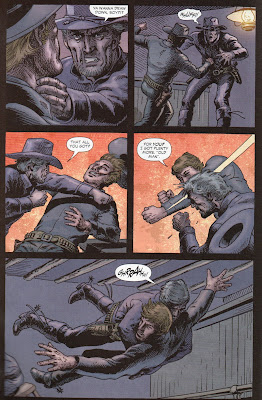 They get into a knock-down drag out fight which ends with Hex on the floor and Jason holding a iron on him. Jason says he has no intention of killing Jonah, he only wants to talk. Jonah says they have nothing to talk about. Jason asks if Jonah wants to know about Mei Ling. Hex states he ain't the one that left and folks have a right to do as they like. Jason states that Mei Ling is dead and that not everyone dies from a bullet. Jason still wants to talk but Jonah has none of it.

He says that what you see is what you get and that's the reason Mei Ling took Jason away. She didn't want Jason to know him and that's that. Jonah exits the cantina and meets a Mexican woman in the street, holding a baby. She tells Jonah, who is still drinking from a bottle, that the stuff will kill him. Jonah replies that he hopes it does.

Jonah mounts up as the woman approaches Jason as he, too, exits the cantina. She asks who that ugly old man was. Jason takes the child from her arms and answers "That was nobody". 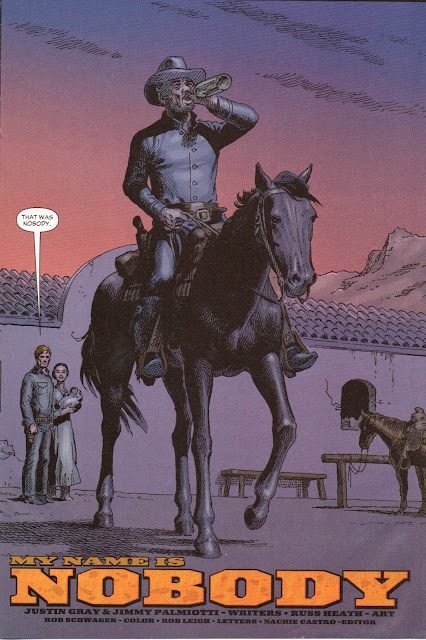 Statistics for This Issue
Men Killed by Jonah - Eleven. The Banditos didn't fare well against Elder Hex.
Running Total - 664 (432 past, 55 future, 15 Vertigo, 172 V2)
Jonah's Injuries -Shot in the left shoulder.
Timeline - At most, one day and a night.

One the greater Hex tales because of so many things. Russ Heath is back and illustrating another tale of 'old' Hex, we meet Jason as an adult trying to reconcile a meeting with his absent father, Jason's quick appearance of Jason's wife and his son, a quick nod to Mr. Albano, the black borders, and a slight reference to Johnny Cash (Boy Named Sue lyric "and ya got the right" vs. Jonah's "Ya earned the right.").

We see so many people encounter Hex and die a quick death, friends that pass through and are forgotten. Any time we are treated to something that builds upon the Hex family tree or revisits a known character, I feel that we are getting a deeper glimpse into the agony, tragedy, and the tortured mind of our favorite bounty hunter.

Next Issue: A heavy Tarantino influence and ya never wanna watch the sausage getting made.