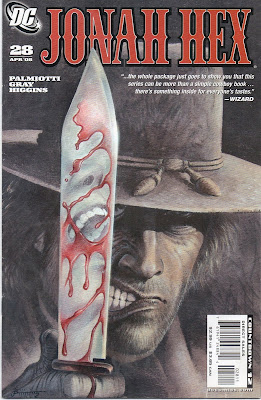 A man runs in desperation, across the desert, pursued by men on horseback. He is roped around the ankle and then drug toward a lone tree. A noose if fashioned and crowd consisting of men and women forcing the man into the noose. He pleads and begs but still they hoist him aloft and then start throwing rocks at him. Finally he is dead and then they light the dangling man on fire and watch until he is burned and the rope parts, dropping the flaming corpse to the sand. Then they leave, the tree afire, not unlike a burning cross.

Some time later, a man rides up and views the carnage. He kicks dirt on the flames and then kneels by the body, weeping.

Hex and Halstead stand off, facing each other in the street. Needless to say, Hex kills Halstead and then the sheriff makes an appearance, thanking Hex. The sheriff pays Hex and adds a little extra so that Jonah will leave town that much quicker. Jonah throws the insult money in the sheriff's face and retires to the saloon.

Jonah is standing at the bar, tossing a few back when the man from earlier comes in with a business proposition. Jonah declines what he sees as a sexual advance and the man explains that he only wants Jonah to kill a town. Jonah's interest is piqued but he requests an explanation. The man explains that an innocent man was lynched and he would like everyone killed, men and women alike. Jonah asks if he is supposed to be an orphan maker or should he kill the kids as well. The man stutters that he hadn't thought of that and Jonah states that the man's best option is to leave.

The man restates his position that this heinous crime was visited upon his friend for reasons he isn't comfortable sharing. Jonah states that he doesn't care "how ya sit in the saddle." and he only finds amusement in those that condemn such "ridin' habits". Jonah declines the job because he doesn't want to spend his days looking over his shoulder waiting for someone seeking to exact revenge. The man persists once again and Hex tells him to leave now as a saloon girl walks up and starts stroking Jonah's shoulder.

Later, Jonah is getting a bath provided by the saloon girl. She inquires why Jonah wouldn't help the man and Jonah grabs a handful of her hair, stating he isn't interested in question from a ten-dollar whore (which ain't exactly cheap, $230 today, but I'm not sure of going rates and values of such things.) Jonah ends up kicking her out when she continues to talk.

Two days later, a small church is getting ready for service and we see a line of gunpowder, alight and burning towards a barrel of gunpowder and cask of dynamite. The resulting explosion burns everyone inside alive. This brings a smile to the face of the man seeking revenge. 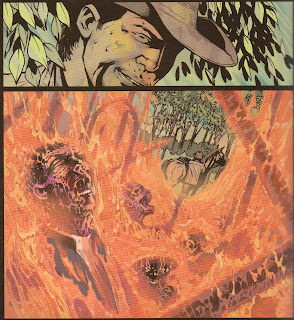 He mounts up and rides off, through the night, back to the town where he left Hex.

Rain falls as he walks into the saloon, asking the saloon girl if she knows where Hex is at. She states that she does and it will cost him. He pays her and asks again where Hex is. Turns out Jonah is standing right behind him. The man smiles because he no longer needs Jon...POW! Hex pounds him right in the kisser.

Jonah asks him if he's feeling good about his revenge. The man says no judge would care, but Jonah counteracts with judges care about murdered babies and children and pregnant women and old men. Jonah grabs the man's tongue and.... 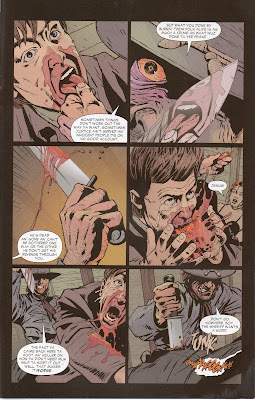 The saloon girl smashes a bottle upside Jonah's head and then pulls a shotgun on him and starts shooting. She condemns Hex... 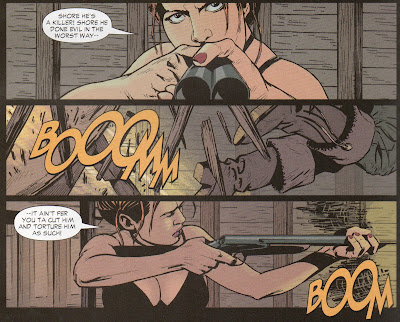 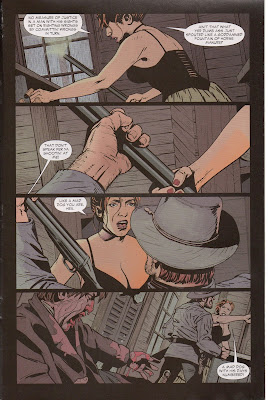 The sheriff finally shows up and assess the carnage. The sheriff tells Jonah to leave town NOW and hex complies. The saloon girl gets in one last jab and Hex tells her to be careful. As Jonah rides off, the Sheriff tells her to calm down because Hell's waiting on Hex, no doubt.

Statistics for This Issue
Men Killed by Jonah - None
Running Total - 670 (432 past, 55 future, 15 Vertigo, 178 V2)
Jonah's Injuries - Bottle smashed upside the head
Timeline - Three days, one day at the start, and then two days later.

I wasn't a big fan of this one, because we once again see the Crazy Church People as a main force in the story, chasing down a homosexual man and killing him in cold blood. More lazy writing, either depending on tropes  to tell a narrative or trying to push an agenda.

I did think Jonah's reaction to the man (who was never named) was interesting. I felt he jumped to a rather quick assumption thinking the man was soliciting him (there was nothing in the manner he was drawn or the language he used that made me think that until Jonah brought it up). Jonah's disinterest was pretty much spot on for Hex. He really doesn't care what people do, as long as innocent people are not bothered. And, of course, Jonah has little to no use for religion or it's followers. 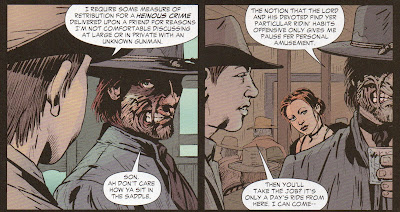 The art wasn't very interesting but I did enjoy the cover in that the knife obscured Jonah's scars but the blood running down the knife mimicked his injuries. And the reflection of the man's mouth in the knife lines up fairly well with Jonah's own scarred eye.
Posted by Dwayne "the canoe guy" at 6:00 AM