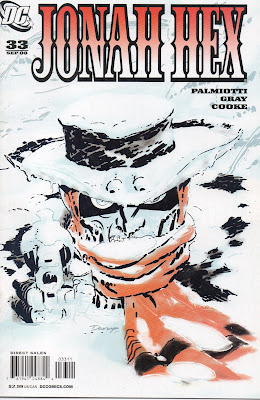 Jonah Hex V2 #33 Sep '08
"The Hunting Trip"
Jimmy Palmiotti and Justin Gray - story, Darwyn Cooke, art and cover
We are listening to the written rememberance of a man recalling when he was young and his father took him on a hunting trip in the snow covered northern mountains on a moon illuminated night. The father and son are making their way through thigh deep snow, the father giving instructions on how to choose the best horse for mountain living.
They come upon their slain prey, a large elk and as the son commences with field dressing the animal, the father continues with the lesson. Finished with the chore, the son packs the meat and the father the rack as they head back to camp, instructions of horse choosing still poor forth. In camp, they bed down for the night, the father still speaking, telling stories of friends in the past and during all of this, we know that all of this talk, this chatter, is welcome. It is comforting for it is given in love and in friendship. This isn't the constant ramblings of a man who is nervous or trying to hide something. The father is sure of himself and wishes to pass this confidence on to his son.
The next morning they are traversing a snow covered meadow when the father accidentally steps in an unseen bear trap. Clamping around his calf, the trap is one that won't be easily removed. The father tells his son to get the knife, they will have to remove the leg. They manage to saw off the leg and the son starts with the rescue by dragging his father through the snow. On into the night the father's condition worsens until he stops his son, telling him that it is over. He tells the boy to lay next to him, hold him close so the father can keep the boy warm through the night. As the snow swirls and covers the two, the father continues to give instruction even to his last breath. 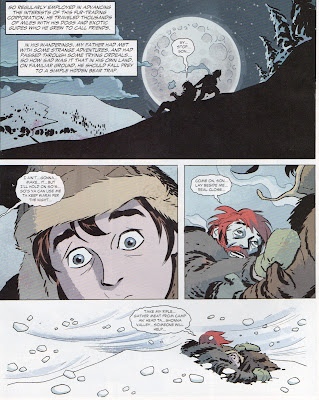 The boy awakens to wolves chewing at the bloodied leg of his late father. He gently removes himself from the snowbank and the wolves turn at him, lunging in a hunger driven fury. Shots ring out and Jonah Hex stands there, outlined in the rising sun, casting aside his rifle as the wolf pack turns on him. With pistol and knife, Hex dispatches the pack in a fury of steel and blood that is over as quickly as it began. He stands over his fallen foes, drops to a knee and starts extracting meat for a meal, as the boy slowly and silently approaches.
Hex looks up to see four mounted men, Northwest Mounted Police, approach. The first man informs Hex that he and his boy are illegally hunting on private land.  Jonah relates the fate of the boy's father and the man asks the boy for confirmation but the boy is silent for whatever reason (I now suspect the young man is mute). The man inquires as to Hex's identity and Jonah tells him he is Fleisher, a trapper by trade.
The man says he doesn't believe it. He has heard there is an American, a bounty hunter, who has crossed the border into Canada to find the man that they currently have hooded and bound to one of their horses. The man says he heard the bounty hunter's name was Jonah Hex. Hex says he has never heard the name. The Mountie doubts the truth of that statement because he knows Hex has a hideous scar. They strip Hex down to his scivvies, bind him, and walk him out to the middle of a frozen lake. The Mountie starts in with a history lesson of who they are and Hex tells him to shut up. They grab a pickaxe and knock a hole in the ice, Hex falling, hands bound, into the freezing water.
Submerged and left for dead, Hex bites through the rope and swims down to grab a log. The Mounties ride off , leaving the boy to the elements and Hex bursts up through the hole, tossing the log across the opening so he can lay across it and make his way back to shore and his clothes.
Hex raises up his head and shouts "Chingah" and a team of sled-dogs appear from almost nowhere and surround Hex, bringing him warmth. The boy brings Jonah his clothes and they are on their way.
Some time later they approach a fort and Hex walks in through the open gates, shotgun at the ready. As a Mountie opens the door to the first cabin Hex kills him with the payload from the first barrel, and when another Mountie investigates, he is just as quickly dispatched with the second barrel. 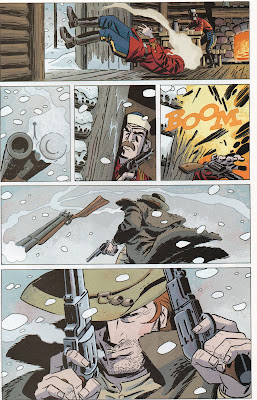 Tossing aside the spent double-barrel, Hex draws his pistols and takes on the rest of the fort, going hand to hand if need be until all of the Mounties are dead. 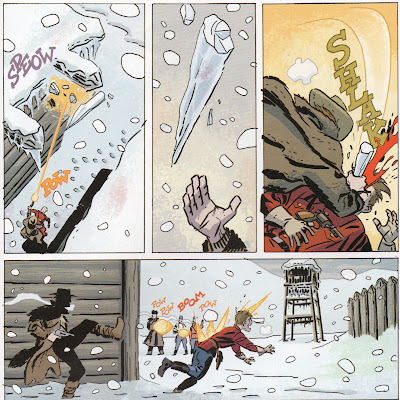 His vendetta fulfilled, Hex collapses and the boy drags him into a cabin by a roaring fire. An unknown time later Hex awakens to see the boy kneeling beside him, joy on the boy's face and a love for a newfound 'father'. Hex sits up and shoves the boy away. He gets up, readies himself and leaves. The boy follows out into the snow, finally grabbing the tail of Hex's coat to stop him. Jonah turns and backhands the boy into the snow and rides off. 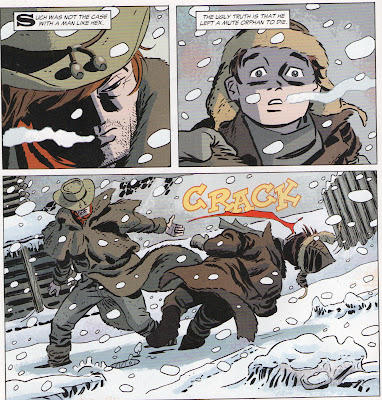 The boy sits there in the middle of the fort, a winter storm falling upon him. Night falls and the snow covers the boy and under the full moon, the wolves once again appear and we learn from the narrator that of all the lessons that have been imparted to the boy through the years, the one taught to him by Hex was the most important, how to deal with wolves.....
Statistics for This IssueMen Killed by Jonah - Twelve.
Running Total - 707 (432 past, 55 future, 15 Vertigo, 205 V2)Jonah's Injuries - Bound and thrown into freezing water.
Timeline - The boy A day and a night, then three weeks recovery so let's say 22 days.
This one was one of my favorites due to the Cooke artwork, the snowy setting, and the period styled writing. Again, Palmiotti and Gray tell us a story ABOUT Hex, from the viewpoint of someone outside of Hex's normal circle of death. An innocent boy, having lost his father is saved by Jonah and is abandoned by the man who saved him, and relates this tale in the past tense (so we know he lives through the ordeal). I also enjoyed the nod to Michael Fleisher in the alias that Jonah tries to adopt, not unlike when he took the name Albano (and what happens next issue).
The retribution handed out by Hex reminded me of Gunfight at Murphysburg. While it didn't have the layout of the locale set out before us like a banquet feast, nor were we introduced to each of Jonah's victims, the pacing and the ruthlessness matched the prior storyline. In Murphysburg we get men burned alive, here Hex goes Die Hard 2 and stabs a Mountie with an icicle.
Rereading this, I keep trying to reconcile Jonah's actions towards the kid who nursed him back to health. Hex realized the kid was without a father, miles from civilization, marooned in a frozen wasteland, searching for a family to connect with and yet, Jonah felt the kid was better off in THOSE circumstances than being at Jonah's side until they got to a town. It was as if Jonah saw in the kid's face that the connection, if allows to bond, would never be broken and the kid would eventually be killed.
Next Issue: The one thing that Jonah can't kill continues to hunt him down....
Posted by Dwayne "the canoe guy" at 5:58 PM