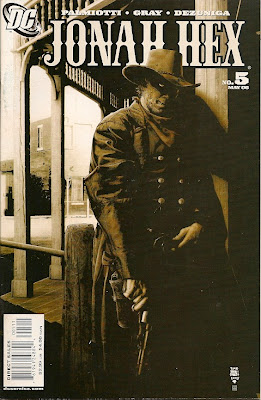 Christmas With The Outlaws - A train cuts across a frozen landscape, snow whirling in its wake and the black smoke cutting a burnt scar across the sky. The train comes to a stop at a small depot on December 25th, 1870 and Jonah Hex and his handcuffed bounty, Mike Harley, walk into the depot. In the station, the old station master recognizes Harley and is aghast that Harley has been caught but isn't surprised that it was Jonah Hex that did it.

The station master calls for Lula to bring them all drinks, on the house. Hex states that a drink is fine, but he's waiting on the Rangers to pick up Harley and doesn't want this night to turn into a social gathering. The master says that it might be one anyway. Harley explains that his boys are coming to spring him free. The master reminds Harley that Frank Denson's gang has been hunting Harley since he killed Denson's little brother back in '67. Denson telegraphed the station that he was coming and that everyone should clear out.

Hex has a bad feeling about the encroaching gangs coming in and tells the old man to get him and the girl outta there. Lula then points out that they can't leave since they are already surrounded.

The Not So Wise Men - A yell from outside reveals that Sanchez and the rest of Harley's gang are there. Hex asks what weapons are on hand and Lula tells him they have two shotguns and a pistol. Hex tells Harley to have the gang leave or he'll blow his head off, to which Harley replies that the bounty is only if he is alive and he ain't worth dying for.

The old man pipes up that he's ready for a fight and that he'll help hold them off, but Lula argues that they didn't buy into this fight and aren't ready for it. Hex tells everyone to calm down but Harley reminds Hex that things are going to get really nasty once Denson and his boys ride up, best take the easy way out now. Lula picks up a shotgun, aims at Harley and says that she doesn't care what happens to him, she just ain't ready to die so Hex can get paid.

Sanchez yells in, asking if Harley is coming out. Tempers are starting to rise in the small depot as the old man pushes the shotgun down in Lula's hands, telling her to put it away. She shouts back for him to shut up and for Harley to walk out the door, followed by Hex. They can all kill each other all day, just someplace else.

The door swings open and Sanchez walks in, Lula instinctively whirls and blows Sanchez backwards into the snow. Hex jumps up and kicks the door shut and tells everyone to get down as the rest of Harley's gang open up on the depot. Harley, on the floor is screaming for his gang to stop before they kill him and the shooting subsides. Hex peeks out the window and sees that things have gone from bad to worse as Harley's gang has been completely wiped out by the Denson boys that just arrived amidst the storm.

The Ghosts of the Past - Hex takes aim and shoots the hat off of Denson's head and tells Denson that the Texas Rangers are on their way to collect Harley and that is EXACTLY how things are going to play out. Denson demands to know who he is talking to and the voice comes back "Jonah Woodson Hex." With those words, half of Denson's men mount up and take off. Denson starts to try to reason with Hex while signalling to his men to surround the depot.

Denson asks for Hex to let the station master and his granddaughter go, but Hex nixes that idea. Lula and the old man start for the  door but Hex warns that they'll be used as hostages to which Harley quickly agrees. One of Denson's men kicks in a portion of a side wall and Hex quickly shoots the man's toe off. Hex says that he will not barter and he will not negotiate and Harley says that Hex knows what will come next.

An Outbreak of Lead Poisoning - Of course, they will try to burn Hex out.

The station master has had enough and knows that Denson is a reasonable man and he opens the door to head out. Denson's men shout that the old guy has a rifle and mow him down, Hex responds with a quick killing of one of Denson's men. Denson demands that his boys hold their fire but three of them slam their way through a back door and Harley shoots one and Hex kills the rest before they can get a shot off. Hex then takes the shotgun away from Harley.

Hex tells Lula to tend to the old man before he bleeds to death. The old man, still alive throws in his two cents just as a flaming torch crashes through the window and Denson's men toss a few more up onto the roof. Harley tells Hex that it looks like the Rangers are gonna be too late, uncuff him and they both have better chance of getting through this. Hex thinks for a second and tosses the keys to Harley. Harley uncuffs himself and Hex lays everything out.

He tells everyone to be ready to run and get right behind him and warns Harley to not get shot. By now the depot is fully engulfed and Denson shouts in that it makes no sense why Hex is letting everyone die. Just then Hex crashes out through a window and Harley bursts out the door and six men are quickly killed, the snow soaking up their blood. Harley grabs a pistol from a dead man and attempts to shoot Hex from behind. He misses and quickly mounts up on a waiting horse. Hex takes aim and shoots the horse out from underneath Harley. 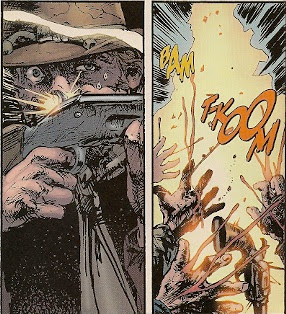 Lula and her grandfather emerge from the burning depot as Hex advances on Harley, now pinned under the horse he tried to escape on. Hex tosses the cuffs to Harley and tells him to put them on. Harley tries to reason with Hex since it's Christmas, why not let him go? Hex says that Harley is Jonah's present to himself. Harley says that there ain't a jail that can hold him, he has a lot of money and money can buy freedom. Hex tells him to shut up.

Lula is livid, the station is burnt to the ground and everything they owned was in there. Just then the Texas Rangers show up and Hex asks about his money. The Rangers then pull their pistols and free Harley. He smiles and says, "Sam, I'm surprised to see you riding with the law." Sam says that it don't pay as well as bank robbing but he heard Harley was caught and that HE would like to collect the reward. Harley mounts up and tells Hex that the next time when someone offers money bigger than the reward, go with the money and since it's Christmas and all, he won't kill Hex for all the trouble he's caused. Harley and the Rangers ride off.

Standing among the smoldering remains of the depot, the station master observes that Harley is a smart as a fox, but Hex thinks that someday he'll wander into the wrong henhouse.

The Wrong Henhouse - 1880, Christmas Day. A train, plowing through a heavy snow, struggles up a steep grade. Suddenly an explosion rips the tracks and the engine to piece. Harley, Sam and the others descend onto the train and head for the bank car to finish off their last job in style. As they whip open the boxcar door they are greeted by Jonah Hex and a Gatling gun and ........ 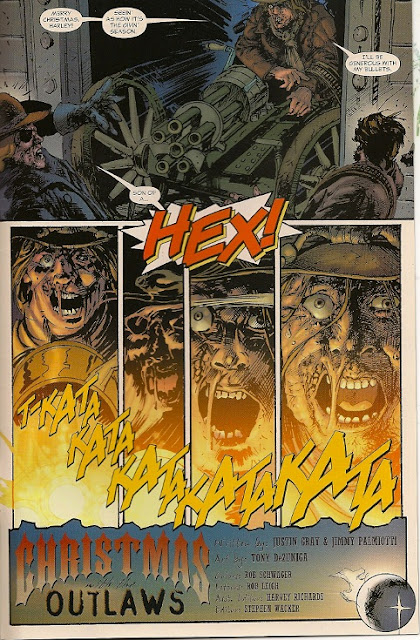 
This story has several unique features. One is the given dates for the tale, something unusual in the new Hex; another is the artwork from Tony DeZuniga (more on that later); a third is the environment, snow (darn few Westerns take place in the snow, sadly).

The story is a great one (better on a re-read than what I originally remember. The claustrophobia caused by the storm, the small depot, the bickering inside, and the changing face of the danger outside really drive home that Jonah is not in charge of this situation but is still trying to hold everything together. I also enjoyed that the station Manager and his granddaughter weren't on the same page with regards to Hex and the situation. One more thing about the story, actually about the style of Palmiotti and Gray. The chapter titles. I love them. It gives the book an overall feel of a serial, either as a dime novel, a Saturday morning movie serial, a tale told around the campfire, whatever it is. The chapters give you a little breather from the action, a small hint of what is to come and because of how much I like them, I'm going to start listing them in the recap as well.

Tony DeZuniga is back, and at first I had mixed feelings. Many years have passed since we last saw his work (1984 to be exact. 22 years?) and his style is now a lot looser, more sketchy and a LOT more stylized with less detail in places, added lens-flare effects (seen below) but there are a few hints of the early DeZuniga with the action crossing panel borders, characters bursting through panels and even blood dripping across the page backgrounds. At first I didn't care for the final page (seen above), but again, on re-reading it, I'm enjoying it more. 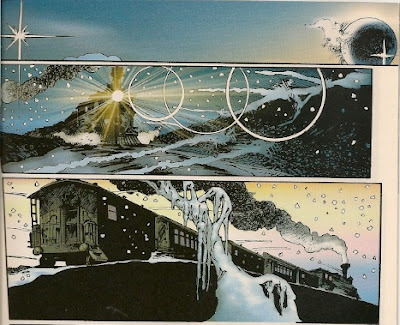 The cover by Tim Bradstreet is near photographic in quality and was in the running for one of the ten best covers of Jonah Hex V2.

All in all, one of the better stories of the new Hex.

Next Issue - Geoffrey Lewis, Linda Hunt, Indians, the Plague and NUNS WITH GUNS!!!
Posted by Dwayne "the canoe guy" at 10:30 PM