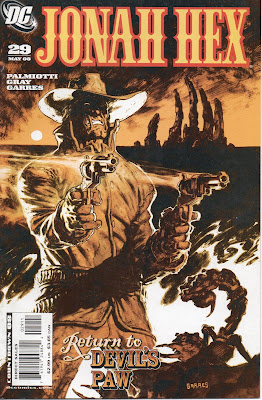 Strange Days Have Found Us

We are treated to a wonderous page of scorpions, spiders and rattlesnakes as the narration expounds:
There comes a moment in most every man's life when he reflects upon some distant action or indiscretion that led him to a particular dilemma.

For some, it's a woman that corrupted their soul and poisoned their heart.

For others, it's a moment of weakness -- whether in crime, drink, gambling, murder or adultery -- that can condemn an otherwise decent man to a dark and perfidious end.

You'll be well served in the knowledge that bounty hunter Jonah Hex had a very long list of such incidents, including a few best not mentioned in polite company. 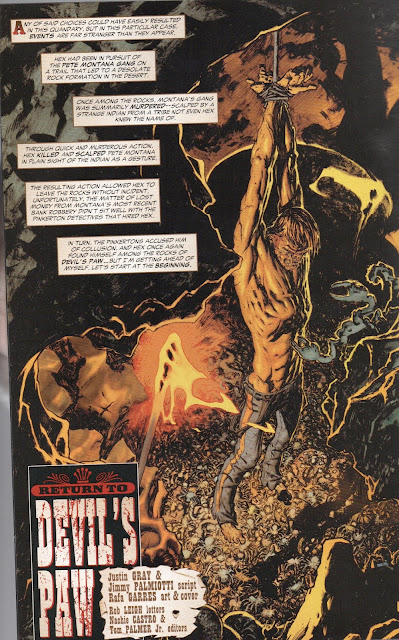 Once More into the Grasp

Hex, his hands bound with rawhide, is leading Jones and his men into the Devil's Paw, a place of horror and mystery, a place where Jonah encountered the outlaw Montana, and eventually gunned them down in 'nearby' Plimpton. Jones accuses Jonah of killing Montana but keeping the looted money for himself and Jones demands to be taken to the Devil's Paw so Hex can turn the cash over to them.

Hex and the men ride into the twisting pathways leading into the Paw when one man, Clancey, takes an arrow to the neck, and Jones gets one in the arm. Hex spurs his horse to escape as another man gets an arrow to the head. Jones and the rest of the men fall under the knives of an ambush of Indians. Hex realizes that he is also surrounded and he quickly dismounts and fights as best he can, but he finally succumbs to the tribesmen. 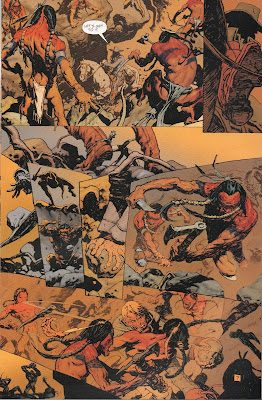 Tribe of the Red Scorpion

and that brings us back to the beginning, with Jonah bound and dangling over a pit of poisonous critters. A warrior shows up, cuts Jonah down and then leads him up into a pueblo to what appears to be the shaman. The old man produces a stone box with a hole in it and Jonah is forced to put his arm into the hole. Tense seconds pass and then Jonah feels a painful bite. A red scorpion falls out of the box and Jonah swirls into unconsciousness.

The town of Plimpton, a three day ride from the Paw, four days later. Detective McCoy, supposedly of Pinkerton employ, is being briefed by the sheriff on recent events, including Jones (also a Pinkerton) and his men taking Hex up to the Paw. McCoy asked if the sheriff had told Jones of the horrible reputation held by the Devil's Paw. He replies in the negative but that Hex had warned them more than adequately. McCoy tells the sheriff to get his horse ready, they are going to the Paw. 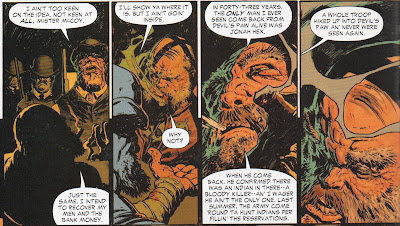 Hex awakens to the amazement of the Indians. Jonah can't understand them and asks a boy standing nearby if he speaks English (he does). Jonah gets to his feet and stands before a warrior, Avenging Wind, who welcomes Jonah and offers him to live with the tribe, since he survived the bite of the red scorpion.

Jonah demands his clothes back and Avenging Wind wants to know why Hex brought white men to the Paw. Jonah explains about the money and how men will keep coming until the money is recovered. Avenging Wind states that they will kill all who come and that Jonah cannot leave as he is now part of the tribe. Jonah gets into a knockdown dragout fight with Avenging Wind and defeats him just as the sound of rifle fire echos into the pueblo.

An entire troop of U.S. Army show up and start slaughtering the tribe. Jonah locates his stolen boots, shirt and rifle, then starts making his way out of the pueblo. Avenging Wind awakens to see his entire people dead. He leaps from the highest point of the pueblo, knife drawn, ready to kill any soldiers he encounters. Needless to say, Avenging Wind is cut down in a hail of rifle fire and hits the ground, dead. 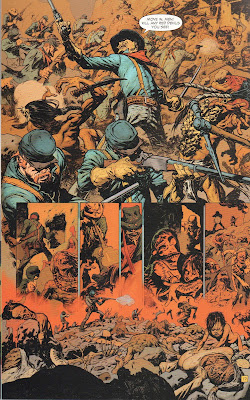 Hex then spies the young Indian on an overlook, rifle in hand and drawing a bead on the Sgt. The young one's shot is true and the Sgt's head is blown open. The rest of the soldiers return fire but Hex and the boy escape after driving off the soldier's horses.

They ride on into the emerging night and Jonah tells the boy that he should wait a night or two for the soldiers to leave the Paw. Hex even suggests the boy find a new home, but the boy explains that the Paw is home. Hex mounts up as the boy heads back to the Paw.

Statistics for This Issue
Men Killed by Jonah - None, even though he beats the living tar out of several Indians.
Running Total - 670 (432 past, 55 future, 15 Vertigo, 178 V2)
Jonah's Injuries - Bitten by a scorpion, knocked out
Timeline - Ten days. The folks in Plimpton say Hex left a week ago and then they ride to the Paw, a three day ride.

I am very conflicted about Garres's artwork. The characters are so incredibly fluid and dynamic, almost to rubbery comic proportions, but that also shows movement and intensity. Like a freeze frame of a super-slo-motion camera when some gets punched. But the inking is so heavy, so much black, that it can be difficult to figure out who is who in the book. A lot of his characters look the same or at times they same character isn't recognizable through the book.

Parts of the story are confusing. The sheriff of Plimpton talks to a man called Detective McCoy (and I assume he is with the Pinkertons, like Jones) McCoy tells the sheriff they are all going out to the Paw, but instead, we see the Army show up. The Sgt has facial hair unlike that of McCoy or the Sheriff so I don't know if Garres messed up on the artwork or what happened. It's sad when a jarring glitch like that has you paging back through a book trying to figure out if you missed something.

All in all, a fair book and a nice return to a prior story.