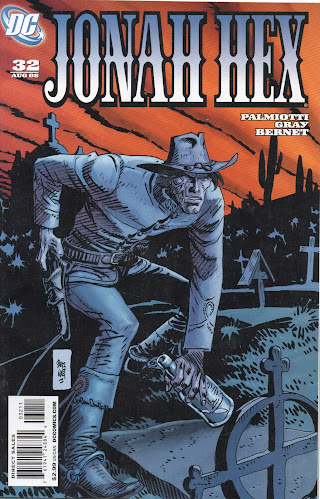 Spectacle of Blood and Sorrow
Jonah is sitting at a bullfight in Mexico with Esteban and his wife, Rosa. Esteban states that he wants Hex to kill the man who "Stole my wife's heart and tasted her sweat". It is the matador, Carlos Rocca, the best in Mexico and who is about to face his adversary in the ring at that moment. Hex refuses and Esteban says he can't find anyone in Mexico that is willing to kill the most famous bullfighter in the country.
We watch the fight as Carlos spears the bull repeatedly and it finally expires. The crowd starts chanting for the bear to be released against a bull. Esteban explains the thrill of this conflict to Hex, and what the stakes are for the bear and how she is fighting to protect her cub from the bull. Hex wonders what all the fuss is about. Esteban got his woman back so why revenge?

Esteban's wife's veil falls revealing her face and that her lips have been cut off, leaving a gaping mouth of teeth.

Hex asks if the Matador did that and Esteban says "No" and shows Hex a knife.

In the ring, the bull charges the bear to the delight of the bloodthirsty crowd. The bear bites and slashes at the bull and they both die in the short contest. As the ring is cleaned up, Hex rises to leave. Esteban asks him to reconsider for if a gringo kills the matador, Esteban can rally his countrymen to fight back against the Americans that are invading his country. Hex refuses again and leaves.

That night, Jonah stumbles into a graveyard, drinking. Suddenly he is surrounded by dozens of women in black shawls and they start dancing around him, finally pulling staffs from their cloaks and beating him. As he falls, a few pull pistols just as Jonah strikes his head against a tombstone and lapses from consciousness.

When You Mess with the Bull


Jonah awakens to find himself stripped and tied to a large target on the wall of the Bullring. Esteban is there, giving him one last chance to accept the offer. Hex tells him to get things over with because Hex is gonna get loose and kill him and all his bitches. Esteban laughs and tells Hex that he has prior commitments for Dia de Los Muetros, but Hex will be dead soon.

Esteban and the women leave and a speared bull comes charging into the ring and crushes Jonah against the wall. The Bull backs up and hits him again. 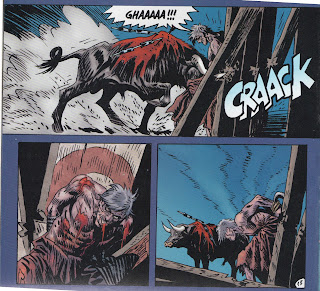 Just then, Carlos, the matador, appears and lures the bull away. Carlos is about to kill the bull when Jonah asks him to stop.

Jonah is taking some target practice, left handed, against a suargo cactus, shooting off spines one at a time. A woman stands in the doorway of an adobe house, telling Jonah how watching him excites her. Jonah tells her to get back inside out of the heat. She keeps taunting him and we learn that she is Chula Maria Espinoza, the sister of Carlos, the matador. She continues to taunt Jonah and he keeps telling her to keep her distance. Finally he has to shoot at her feet to get her to back away. Hex grabs her and she fake swoons so Hex slaps her and threatens to tie her to a chair. Carlos rides up with an extra horse. Jonah gets his gear assembled and mounts the horse. Carlos asks what Hex will do now and Jonah draws his gun and aims it at Carlos. Carlos stammers back that he saved Jonah's life, surely Hex can't turn on him now. Carlos said he didn't discard Rosa, Esteban has too many men for Carlos to kill himself. Hex tells Carlos that if someone cuts the face of the woman you love, you do something. Carlos offers to purchase Hex's services and Jonah refuses and rides off.

A pack of wild dogs battle against a speared, bloody bull as Hex walks up and sits down next to a startled Esteban. Hex tells him he should have stuck around to make sure the bull finished things and Jonah stabs Esteban with his own knife. Esteban dies and Rosa hands Hex a bag of money. Hex tells her to keep it, this one is on him. Hex asks if she wants the bloody knife as a keepsake and she refuses. Hex gets up, turns to walk away and says "For whut it's worth, the matador still loves ya." 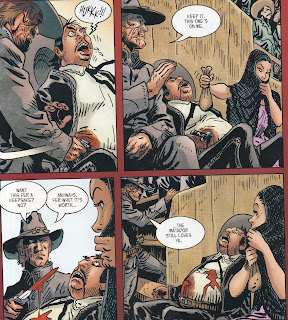 Statistics for This Issue
Men Killed by Jonah - One, Esteban.
Running Total - 6844 (432 past, 55 future, 15 Vertigo, 193 V2)
Jonah's Injuries - Beaten over the head by the 'maidens' and his head strikes a tombstone. Then he is, well, not gored, but is crushed by a bull, twice.
Timeline - A day and a night, then three weeks recovery so let's say 22 days.
I liked this one a lot. Bernet's artwork added quite a bit to this one and one small thing was the gutters between the panels changed color, white for day, murky brown for the graveyard, blue for the night with the bull, and dark red for Esteban's death. It added the passage of time and an emphasis on what was happening. Nicely done.
I also enjoyed the characters, each one was unique and even Esteban's wife, though she said nothing, Bernet's portrayal of her spoke volumes. Even Chula, with her odd comedic interlude, was a joy to behold. All in all, an issue worth seeking out.
Next Issue: A hunting trip gone wrong, evil Mounties (but I repeat myself) and Darwyn Cooke

Ah, I didn't notice the color changes in the gutters! Good eye, Dwayne. And I enjoyed Chula as well, with her literally throwing herself at Hex and he keeps batting her away.