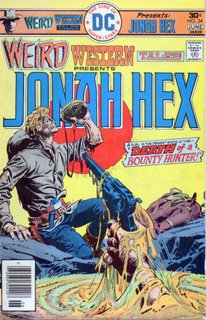 We're back to the gritty art of Moliterni this issue and it starts with three men sitting around a campfire talking about how much fun it was to see Jonah Hex hanged. As they laugh & talk there is a loud SNAP and then Jonah steps out of the shadows with a broken noose around his neck, with the campfire flaring up dramatically. Jonah tells the three men to drop their guns when he is suddenly hit from behind and knocked out.

Four men walk up. They are bounty hunters, headed by Jason Leech, and they shoot the original three men and then take the bodies back to town for the $3,000 reward the next morning. As they collect, Jonah shows up & demands that the money is his. A fight is about to break out between the two men when the sherrif walks in with a wanted poster for Dutch Rafferty for $5,000. Jonah takes the poster and again threatens Leech. Leech decides to split the money with Jonah to save his own skin. 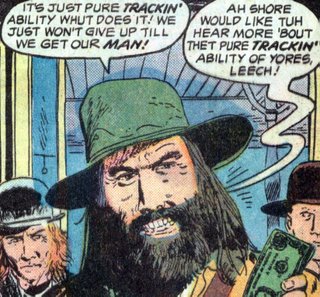 Later, Jonah is outside the livery and has a pack-mule with supplies and several dozen canteens. He is approached by Oswald Hotchkiss of the New York company of Smart & Smathers Publishing. Hotchkiss wants to follow Jonah and pen a dime novel about his exploits. Jonah's not interested until Hotchkiss mentions $1,000 that he is willing to pay.

All during the trip, Hotchkiss is quizzing Jonah on his tactics & his plans. Finally, Jonah follows Dutch and a cohort across the desert and into a narrow canyon. Hotchkiss asks if Jonah is going to blast them out with dynamite, but Jonah's plan involves using Hotchkiss as bait. He has Hotchkiss ride alone into the canyon.

Once in the canyon, Hotchkiss is spotted by Dutch & friend. They run down & grab Hotchkiss's horse before he can ride off & they demand he dismount. Hotchkiss hollers to Hex for help and Hex gut-shoots Dutch's friend as he draws on Hex. Dutch surrenders on the spot. Jonah ties up both criminals and waits for night to fall so that Leech and his bunch can't ambush them.

Hours later under cover of night, Hotchkiss begs for a break and Jonah relents. Jonah tells Hotchkiss to help Dutch off his horse & to get the bedrolls out. They learn that the gut-shot outlaw is dead and Jonah drags him him off to bury him so that the buzzards don't give away their position come sunrise. While Jonah is burying him, he tosses in a canteen about 3/4 full & buries that as well.

When Jonah gets back to the camp, he learns that Hotchkiss has built a fire to make some coffee. In anger Jonah stomps it out explaining that a fire could be seen for miles. Later in the night, Hex wakes up to find Hotchkiss gone. He spies a glow coming from over a ridge and when he tops it he find Hotchkiss building a huge bonfire to signal Leech. Hex beats the living crap out of Hotchkiss, including a "kick to the head", when suddenly Leech & the gang stop him. 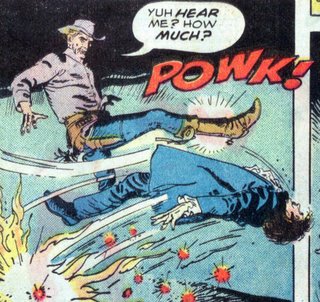 Hotchkiss is relieved to see Leech save him, but Leech shoots Hotchkiss dead. Leech also shoots Dutch and kills him. Leech loads up Dutch's body and takes the mule full of canteens, since all of their canteens are almost dry. They decide to leave Hex in the desert to die. Once they are gone, Jonah digs up the canteen he buried with the body and then crawls into his bedroll since there "ain't no hurry."

The next afternoon, Leech's gang dismount and start to drink from the canteens on the mule only to find all the canteens contain sand. Hex has tricked them and they are all going to die of thirst because of it. One of the men still has half a canteen, but Leech guns him down and then shoots the other two men in his gang. The gunfire scares the horses and they run off, dumping Dutch's body in the sand. Leech starts dragging Dutch's body back to town, but a sandstorm comes up and since Leech has nothing to use to cut off Dutch's head, he has to drag the whole corpse (and in Dutch's case, that is sizeable). Leech continues through the storm, eventually tying a rope around Dutch and the around his own waist. he is now forced to crawl, his water gone & his strength fading.

Night falls, and eventually Jonah Hex arrives to find Leech surrounded by sand & gasping for water. Hex asks where Dutch is. Leech gasps for water. Jonah tells him that for the location of Dutch, he'll get some water. Leech raises up, looks behind him and says "H-He's... He's...." and then dies.

Jonah notes that with all the sand that has been kicked up, there is no way he could backtrack Leech's trail & find Dutch, so in disgust he rides off, never seeing that Dutch is buried in the sand dune behind Leech. 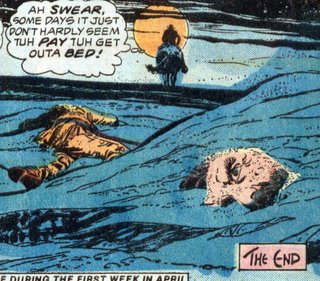 Statistics for this issue
Men killed by Jonah - For all the bloodshed, 1, Dutch's friend
Running Total - 91
Jonah's Injuries - Knocked out, again.
Timeline - Nothing in the story to place this anywhere in the timeline.

This is one of the better stories but sadly the coloring really hurt the book. The blue seems to have run amock on some pages and the rest of the coloring was just big blobs of color obscuring Moliterni's great line work. I'm not sure if this one was in the recent Showcase, but I'm sure that it was much better in B&W than here.


Next Week: Hangin's, cross-dressin' and ice cold beer. Just your normal prelude to Thanksgiving.
Posted by Dwayne "the canoe guy" at 11:44 AM

I like the bodies in the sand. Oooh, scary! I always liked Hex, because he doesn't always win. Actually, he RARELY wins when it comes right down to it.