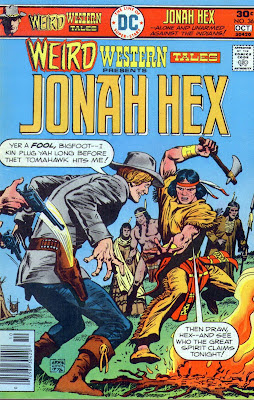 The story starts with a band of Indian hunters chortling over how much fun it was to wipe out a band of Paiutes. Suddenly they are set upon by a band of Indians led by "Crazy" Joe Bigfoot and they are all slaughtered in turn in an obvious act of revenge.

At nearby Fort Onodaga, Arizona, Col. Scott welcomes Jonah Hex into the Fort. He makes mention that the Army is finally ready to pay the fee that Jonah has requested and then he introduces "Rawhide" Gant, a hired scout. Gant makes some demeaning remarks about Jonah being a paid killer. Col. Scott calls Gant on the carpet for his slur, but Gant states that it's obvious that Hex is an Indian lover and that the savage Indians deserve to be wiped out.
An orderly bursts into the Col's office stating that four white men have just been found slaughtered. Gant says that proves his point but Jonah says that it was probably justifiable. The Col is worried that this could endanger an upcoming treaty signing between the US & the Paiutes.

The next day the Col and his entourage ride into the Paiute camp of Chief Running Pony. Running Pony welcomes his friend Jonah and he talks of making peace with the US. A scream is heard from a nearby teepee and Jonah storms in to find Gant attempting to force himself on a Indian maiden. Jonah beats Gant down & tells him to leave the tent. 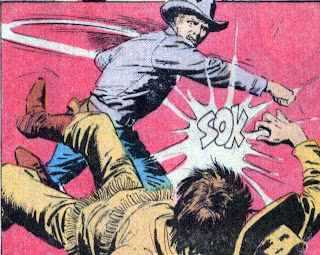 As Gant turns to go, he pulls a knife and throws it at Jonah. The Col shouts a warning and Jonah spins, shooting the knife in two in midair. Running Pony suggests that they continue with the peace talks.
While Running Pony, Col. Scott, Hex & Gant sit within the chief's teepee, Bigfoot returns to camp to be greeted by his love, Spotted Fawn, who is, yup, the Indian maid that Hex rescued. Bigfoot wants to implore the chief to not sign the treaty but before he heads into the teepee he instructs one of his men, Red Eagle, to impliment their plan. Bigfoot enters the teepee and tries to persuade the chief to not sign the treaty. He speaks of the cowardly white man and when Gant takes offense, Bigfoot dispatches him with a quick knee and a karate chop.

Bigfoot states that there is only one white man with honor & that is Hex. While Hex is sitting smoking a pipe, Red Eagle reaches through a slit in the tent a silently teals Jonah's guns from their holsters. Bigfoot states that without his guns, the white man can never defeat the Paiutes. He rushes Hex and Jonah discovers his pistols missing. Bigfoot starts laughing at having caught Hex off guard, but Running Pony basically tells him to straighten up. Jonah tells Running Pony that no harm was done.

Running Pony states that the elder council has decided to make peace with the US and as a symbol, Bigfoot & Hex will become blood brothers by cutting their forearms and letting the blood mix. Running Pony warns Bigfoot not to break the treaty with the white man or he will suffer under Paiute law. Bigfoot rides off and Col. Scott wonders if Bigfoot will honor the treaty.

The next morning, Spotted Fawn is standing near a waterfall, waiting on a rendevous with Bigfoot. However, Gant has decided to sneak back to the camp and he finds Spotted Fawn. Alone, his courage & libido running amuck, he tries again to rape Spotted Fawn. 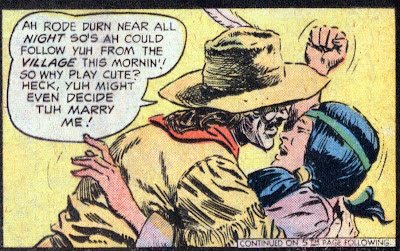 She fights back & scratches him. Angered, he punches her, she staggers backward and falls to her death off the cliff. Gant hightails it out of there, blaming Spotted Fawn's death on her not wanting to have "fun".

Some time later, Bigfoot discovers Spotted Fawn's body at the bottom of the cliff. He sees a feather clutched in her hand and recognizes it as the same feather that Gant has always worn in his hat. That afternoon Gant is leading about a dozen men when Bigfoot and his party kill and scalp the entire group. After the massacre is discovered, Running Pony contacts Jonah. Jonah sides with Bigfoot and the chief agrees that it was Bigfoot's right to kill Gant, but to slaughter the innocent Army men with him is an act deeming punishment. Running Pony asks Jonah to bring Bigfoot back.

Jonah tracks Bigfoot down, subdues him, and starts taking him back to camp. Bigfoot starts railing against Col. Scott, but Jonah sets him straight by telling him it was Running Pony that wanted Bigfoot captured. Once Bigfoot is returned to the camp, Running Pony pronounces sentence on Bigfoot. He is to be shot ten days from now. Until then Bigfoot may go and make peace with the Great Spirit. Bigfoot slowly rides out of camp and Col. Scott, who has been present during all of this, is convinced that Bigfoot will not return.

Ten days later Bigfoot returns to his execution. Bigfoot hands his horse and his rifle over to his friends and then informs the chief that he has decided on his executioner, as is the Paiute custom. He has chosen Jonah Hex. Bigfoot sits upon a blanket and starts his death song. Running Pony then paints a circle upon Bigfoot's chest and then hands the rifle to Jonah. As Bigfoot continues his deathsong, Jonah takes aim and kills Bigfoot with one shot. He walks over to Bigfoot's body, lays the rifle on it, mounts up & rides off.

Statistics for this issue:

Timeline: None really except that it does take place after the first meeting with Bigfoot.
This issue, more about Bigfoot than Jonah, is an interesting change from the normal 'capture the badguy'. The entire tale leans more to telling a story about the honor and disciplines of the Indians and the lack of understanding that the white men have of them. There are three viewpoints of the Indians expressed here: Gant, who sees them as vermin to be eradicated; Scott, who doesn't understand that there can be honor that is observed even though punishment & death will occur; and Hex, who has taken time to learn and understand the ways of the Indians, he may not agree with it, but he respects it. 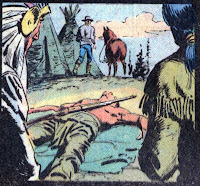 Whoah! Very nicely done. I don't have this particular issue, so this is a treat.

This one's in the second Showcase volume, and that Gant/Spotted Fawn panel has different dialogue there. He talks about being a better match for her than Bigfoot, instead of how she might want to marry him. Just a neat tidbit.


By the way, really enjoying the blog. It's nice to get insight from a fellow Hex fan.