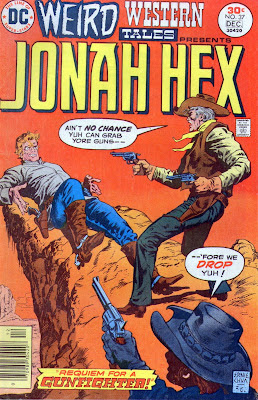 As stated in the opening caption, the following story takes place in Arizona Territory in 1878. Jonah is chasing the Bart Jethro gang. He comes upon a cabin engulfed in flame. He hears someone shouting for help from inside. He smashes his way inside and finds a young man trapped under a fallen beam. Jonah drags him to safety and once they are out, someone starts shooting at them both.

Jonah tells the man to stay down and tries to circle around their attackers. When Jonah gets to where the gunfire was coming from, he finds that they are gone but he notices a distinctive hoofprint.

When Jonah returns, he asks the young man if he has any idea who would be shooting at them. The man, Frank Joad, explains that it is Wade Ransome, a killer that Frank's father, a sheriff, sent to jail a year ago. Ransome broke jail a month ago and killed Frank's mom & dad then set fire to the cabin. Jonah gets ready to ride off but Frank begs Jonah to go after Ransome. Jonah turns him down and then Frank asks Jonah to teach him out to shoot, so he can get his parents killer himself. Jonah turns him down again. When Frank asks why, Jonah replies, "All yuh'd have tuh look forward to would be a lifetime of sleepless nights an' a bullet in the spine." and then rides off.

Later, while riding in a narrow canyon, Jonah is bushwacked by the Jethro gang when they throw a huge net over him. Jonah falls off his horse and when the bandits come to get him, he manages to shoot two of them before being knocked out with a rifle-butt. The Jethro

gang take Jonah to the top of a cliff and tie him to a huge boulder. After beating and kicking him to get some of their anger out, they push Jonah over the cliff into the river below.

Frank, who has been following Jonah, sees everything and jumps in the river and cuts Jonah free from the stone. Frank asks Jonah one more time to train him & Jonah relents.

In the days that follow Jonah teaches Frank the following gunfighting tips:
Finally Frank is ready and he and Jonah get the drop on the Jethro gang several nights later (when they are gloating over their $60,000 bank job, or 1.04 million in today's $$). All eight members of the gang raise their hands and Jonah tells Frank to keep them covered while he grabs their weapons. As Jonah advances on them, Frank suddenly holsters his gun. Bart Jethro notices this and states that it looks like they are gonna have a gunfight on their hands. Bart shouts for his men to kill them and the gunfire starts.

When the smoke clears, the Jethro gang is dead and Jonah walks over to Frank and knocks him to the ground, berating him for his grandstanding that could have gotten them both killed. The next day they take the bodies into a nearby town. As Jonah heads into the Sheriff's, he notices a horse with an odd hoof and it matches the track that he found above the burning cabin from many days ago.

He storms into the Sheriff's office and asks who owns that horse. The man talking to the sheriff owns up to it & Jonah tells the sheriff to lock the man up for killing Sheriff Joad and for trying to kill Frank Joad. The man explains that he is Ransome, but HIS dad was a sheriff that was killed by Frank Joad. He had tracked Joad to a cabin and set it ablaze to flush him out. Ransome had to leave when one of Joad's pals (Hex) tried to ambush him.

The sheriff verifies the truth of the story and Ransome decides to go out and get Joad, who is out in the street. Jonah tries to warn Ransome that he won't stand a chance against Joad. When Jonah tries to physically stop Ransome, the sheriff knocks him out with a rifle butt. Jonah comes to shortly thereafter, but by that time Ransome is laying dead in the street with Joad standing over him.

Jonah says that to Joad that he "made yuh! Now ah guess ah'm gonna have tuh un-make yuh." The following page is a beauty of simplicity. All of the panels are devoid of background or the buildings are just a sillouette. This leaves us with only the two men facing off with each other. Joad keeps bragging about how he is faster, younger, quicker than Hex and that it's time Hex steps aside for a better man. Hex then asks Joad, "Yuh know whut, Joad?"

And then they fire, Jonah collapsing to the ground. Joad stand ther gloating that he is the faster of the two and then he drops dead. Jonah picks himself up off the ground, his arm bleeding where Joad shot him. The doctor tries to attend to him, but Jonah shrugs him off. The doc says that it looked like Joad was faster, so how did....

As Jonah gets on his horse he replies "Ah been stayin' alive a long time now, doc. Take muh word fer it, it ain't enough tuh shoot the fastest.. yuh also got tuh shoot the straightest." With that, his horse rears up and he rides off.

Statistics for this issue:
Men killed by Jonah: Hard to say, let's say that Jonah killed over half of the Jethro gang (5 of 8) and then killed Joad. That makes his total 6.
Running Total - 101
Jonah's injuries: Knocked out twice, kicked in the head once, punched in the gut once, shot in the right arm.
Timeline: 1878. Jonah starts off with his striped hatband similar to the one he was sporting back in '67 and then ends up with a concho band.

I enjoyed the story what with the hidden identity of Joad as well as the training session. The art was not my favorite, some of the proportions on the characters seemed out of whack but there were a few panels and the gunfight page that really stood out.

NEXT: Wolves in the wild, Treating an arrow wound, Them Damn Sheepers, and Jose Luis Garcia Lopez.
Posted by Dwayne "the canoe guy" at 9:00 AM

I love the old Jonah Hex's, but I must admit that the money always drives me wild. Bank robbers running off with $60,000? Out west?

This, at a time when an army private made $15 a month, and a dollar a day was a living wage!