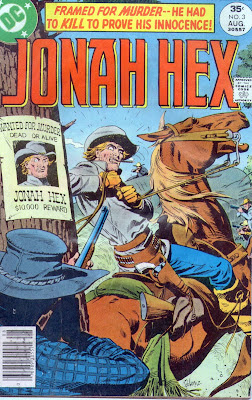 Jonah Hex, a $10,000 bounty on his head, is riding hard & fast from the sheriff & the posse pursuing him across Texas. Jonah manages to get a slight lead on them as he rides over a bridge on a river. The posse thunders across the bridge and moments later Jonah pops up under the bridge, gasping for breath. It appears that he abandoned his horse as a decoy for the posse to follow. On foot, he staggers across the countryside until night falls and he finds a cabin. Realizing that one of the shots nicked him in the neck, he knows that he will need some help.

He goes to the door and knocks. The gentleman inside puts down his Braille Bible and answers the door and lets Jonah in. Mr. Jacobs is a pacifist, a Quaker, and completely sightless. He tends to Jonah wounds and notices the 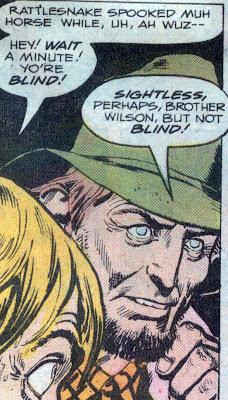 scar on Jonah's face. Jonah tells Jacobs that his name is Wilson and that his horse was spooked by a rattler. During dinner, Jacobs tells Jonah that his daughter is in town buying supplies & should be back tomorrow.

Suddenly there is a knock on the door, Jonah rushes into the back room as Jacobs opens the door to the sheriff. The sheriff explains about Hex being wanted for three murders and leaves a wanted poster for Jacobs to show his daughter. After the sheriff leaves, Jonah asks why Jacobs didn't turn him in, since he matched the description that the sheriff gave. Jacobs replies "Maybe you've sinned, but vengeance is the Lord's domain."

Jacobs continues to tell Jonah of his pacifist ways when a lit bottle of kerosene smashes through the window. Jonah looks outside & sees about seven men. Jacobs says that they might be Matt Henson's men. Henson has been wanting to buy the Jacobs place and has been making threats when Jacobs refuses to sell. Jonah gets the flames put out and then asks Jacobs where he keeps his Bible.

Outside, seven of Henson's men are standing waiting and as a Bible toting figure leaves the cabin, they start laughing & taunting Jacobs. They ask what Jacobs is reading in that good book. The figure raises it's head and quotes: 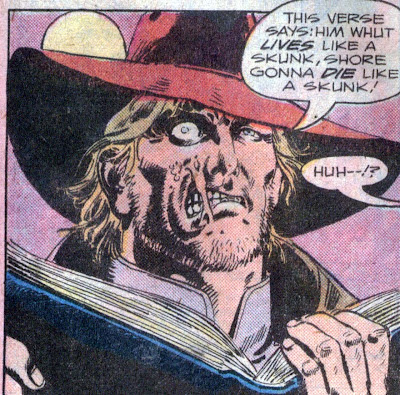 As they try to draw on Jonah, he opens fire and kills 5 of them before the other two ride off.

Back at Henson's place, he is furious with the two survivors. They explain about the hideous scarred man that run them off. Henson reaches into his desk & pulls out a wanted poster of Hex and asks his lackeys if that was the man. When they acknowledge that it was, Henson orders one of them to get the sheriff in the morning while Henson & the other one will round up some more men and they will all ride to the Quaker's place.

Early the next morning Jonah is riding around Jacob's land, trying to determine why Henson would want it. It's then that he finds several bluish colored rocks. He gathers a few & takes them back to the cabin. When Jonah walks in to the cabin, he is greated by the lovely, dark-haired Faith Jacobs. Jonah explains his discovery to them both, pointing out that the land has a lot of turquoise on it & folks back east are paying top dollar for it. Faith starts getting breakfast ready when she suddenly sees the wanted poster & tells her father that Hex is a wanted murderer. Jacobs explains that he is aware of it, but he won't turn Jonah in. Faith, not sharing her pappy's pacifist ways, storms out of the cabin to get the sheriff. However, she is nabbed by Henson's men and held hostage.

Henson shouts into the cabin that if Hex surrenders and Jacobs turns over his land, Faith will be unharmed. Jonah looks out the window, counting 5 men, including Henson. He gives Jacobs a psitol and instructions to shoot out the window as a distraction while Jonah tries to get behind the men. Jacobs refuses to use any form of violence, even to save his daughter. Jonah, disgusted, runs out the back door and circles around behind the men. Four of them are on horseback and one is holding a gun to Faith's head. He is the one (even though he has only one eye) that spots Jonah. Fat lot of good it did them. 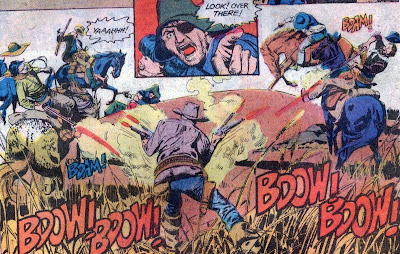 Jonah kills the four on horseback and before one-eyed Joe can shoot Faith, she bites his hand, gets away & Jonah plugs him a good one. Faith shouts a warning to Jonah that another one is on the roof of the cabin. He gets shot in the left shoulder & in his right ribcage before he picks the gunman off the roof. With bodies everywhere, Faith runs to Jonah and helps him get into the cabin where her father starts tending Jonah's wounds.

As sudden pounding at the door and the Sheriff shouting to come in interrupts them. The sheriff shoves his way in only to find Jonah gone. The last two panels show Jonah barely being able to stay in the sadlle due to loss of blood, unaware that someone is pointing a rifle at him. Someone in Confederate greys with a huge scar on his face!!

Statistics for this issue
Men killed by Jonah: 11 men, making this one of the bloodiest issues yet.

Running Total - 125
Jonah's Injuries: A bullet graze in the neck, shot in the left shoulder & right ribcage.
Timeline: Part of the Jonah Hex murderer arc, I haven't determined YET a timeline for this one. I'm having trouble pinpointing the first printing of the first American Braille Bible, one source points to 1838, another 1881 and another is 1911. This looks like it will be no help in putting this story in the timeline, so I think we'll have to wait until a later story for some clues.

I really enjoyed this story, lots of shooting, pacifist vs. gunfighter, cute Lopez women, what more could you ask for?

Next Issue: Jonah vs. the Actor's Studio and argueabbly the most bad-ass kick to the head you have EVER seen!!!.

This sounds like an excellent issue, and I must find it. Boy howdy, the body count is climbing!

The good news is that I have managed to get my hands on the two early WWT issues I have been missing. Once those are blogged, I'll have an extra special surprise regarding the body count.