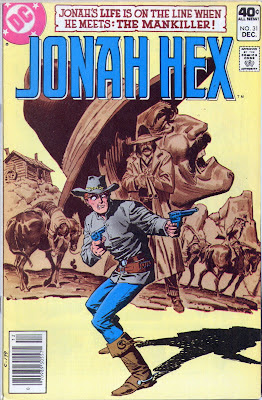 Jonah Hex #31 Dec 1979
"Arbee Stoneham..Man Killer!"
Michael Fleisher, story - Luis Dominguez, art & cover
Winter, 1866. Jonah has been forced into joining a posse and has just witnessed the hanging, without trial, of the outlaws that he captured. The sheriff suggests that Jonah take up bounty hunting and hands him a wanted poster for Eddie Cantwell, and old Civil War buddy of Jonah's.
Later in town, Jonah is mentally recounting how Eddie saved Jonah's life during the war and finds it hard to believe that Eddie has turned to crime. As Jonah is strolling down the street, he bumps shoulders with a bearded gentlemen who turns and recognizes Jonah. It runs out to be Eddie Cantwell. Eddie explains that he is now a wealthy cattle buyer and that he & his associates are on their way to close a big deal. Jonah wants to sit down and talk to Eddie, but Eddie suggests that they meet in the saloon around 11 that night. Jonah agrees and heads for his room at the hotel to grab a few winks before then.
None of this, however, has escaped the notice of the sheriff, who has remembered that Jonah had previously mentioned that Jonah didn't know anyone in town. The sheriff gets somewhat suspicious.
Later that night, shortly after 10, Jonah rises and starts washing his face, getting ready for his meeting with Cantwell. Down the street, the express office is being robbed by Edie Cantwell and his two sidekicks. They gun down a man shouting a warning and ride out of town. In his room, Jonah hears the shots and then the sheriff kicks open the door to Jonah's room. The sheriff states that earlier he saw Jonah talking to the men that just robbed the express office.

Jonah quickly draws and shoots out the lamp in the room and then dives out the window onto the roof of the hotel porch. He jumps to the ground and rides off.

The sheriff makes tracks back to the jail and starts rounding up a posse when a black-hatted man in a dark overcoat strides in, stating that the sheriff has no need for a posse. The man, heavily armed and even MORE heavily mustached, states that he has been tracking Cantwell since Apache Forks and that he deserves the reward for Cantwell's capture. The sheriff backs down and the man rides off. One of the deputies questions the sheriff's actions and the sheriff tells him that was Arbee Stoneham, The Man-Killer!!!!

Dawn breaks, finding Jonah on Cantwell's trail and in turn Stoneham on Jonah's trail. Stoneham, in an inner monologue states that at 52 years old, he isn't about to let anyone steal his bounty, even a wildcat fighter like Jonah Hex (at this point I would like to point out that Jonah hasn't started bounty hunting yet and therefore doesn't have the huge reputation that he would earn later on. However, it appears that he does have quite a rep just from his exploits during the Civil War.)

Jonah tracks Cantwell for hours until he finally locates Cantwell and his men in an abandoned mine. Jonah tries to figure out a way that he can talk to Eddie alone. Inside, Cantwell and the men are splitting the loot, when they hear an owl outside. Since owls sleep during the day, the sidekicks are alarmed and think that Indians may be nearby. One of them exits the mine and Jonah jumps him from above , knocking him out and then punching the other one unconscious.

Jonah quickly tells Eddie what happened to him after Eddie robbed the express office. Eddie apologizes for getting Jonah mixed up in it, but he had no idea Jonah was in town and robbing is such good business lately. Their discussion is interrupted by Arbee Stoneham slowly riding up on his horse. Cantwell gasps at the sight of Stoneham.

Stoneham slowly dismounts and offers Jonah some bounty hunting advice:
During this lesson, Stoneham slowly cocks his double barrel shotgun and shoots both of Cantwell's accomplices, reloads and then shoots Cantwell. Stoneham says that he has nothing personal against Jonah, be he is gonna take Jonah's pistols and run off Hex's horse, just for Stoneham's safety. Arbee Stoneham rides off with the three corpses, telling Jonah not to fret about getting beaten this time, because he was beaten by the best there ever was.

The flashback from last issue is over and we are back to the Spring of 1874. Jonah has reached the end of the street and confronts the Anderson's. Jonah tells Anderson and his two brothers that he is gonna kill them. The men draw and Jonah guns them down right where they stand. Hex turns and walks off (presumably to collect the bounty) and decides that it is about time that he look up Arbee Stoneham and pay him back for making Jonah look like an ignorant jackass.

Statistics for the issue
Men Killed by Jonah - 3
Running Total - 243
Jonah's Injuries - none, whew
Timeline - Winter of 1866, shortly after Jonah was scarred and the Spring of 1874.

I enjoyed this story, especially Arbee Stoneham who reminds me of Sam Elliott. The idea of an old hand showing Jonah the ropes, although through humiliation, coupled with the fact that Stoneham is not that honorable of a man, really added flavor to this tale. It seems like Cantwell was merely a plot device to have Jonah involved in a bounty hunt, but I can overlook that. It would be nice for a secondary character to be involved for more than two issues and then die (but that will happen much much later)

Next Issue: The best damn gunfight ever seen in a western book, the confrontation with Arbee Stoneham, and Jose Luis Garcia Lopez returns!!! (Yes, I just wet myself)
Posted by Dwayne "the canoe guy" at 12:49 PM

This sounds really good, and is one of the ones that I haven't read yet. You're right, he DOES sound like Sam Elliot!