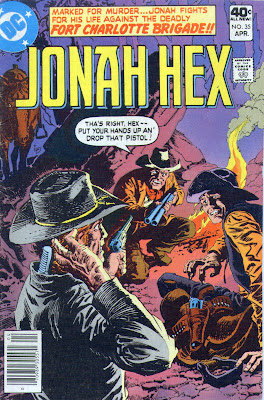 Judging by the cactus, Jonah is riding across Arizona looking for the Carley brothers who have robbed the Santa Fe Bank. Little does he realize, two of the brothers are high up in the cliffs, laying an ambush for him. Two of the brothers are ready to gun Jonah down as he rides into a narrow canyon, but suddenly Jonah walks up behind them and tells them to surrender. They both aim their rifles at Jonah, telling him to put his hands up. As Jonah raises his right hand, he grabs his knife in the back of his coat and buries it in the chest of one of the Carleys. The other brother surrenders and Jonah tells him that since he is shaking so much, he should put on Jonah's coat.


On the other side of the canyon, the third Carley brother is waiting for Jonah to come along. Just then he spots Jonah riding straight up the middle of the canyon and the brother opens up, knocking the rider from the horse. He celebrates and then runs down to the corpse, only to find it is his brother, bound to the saddle, gagged and dressed up to look like Jonah. He has killed his own brother.

Jonah gets the drop on him too and the next morning he takes the two corpses and one survivor on into Painted Butte, Texas.

Calendars and geography are not the strong suit in DC westerns. Saguaro cactus are found in SE California, southern Arizona, and NW Mexico. The bank is robbed in Santa Fe (N NM), Jonah captures them amongst the saguaro cactus and then takes them clear across AZ & halfway across NM and into TX (about a 400 mile trip) ...the next morning. My head just exploded. And we haven't gotten to the fun part. 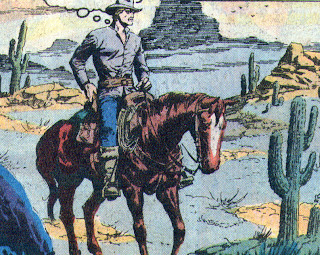 Jonah rides into town and steps into the sheriff's office. An elderly man sitting on a porch sees, Jonah, jumps up and runs into the telegraph office. Next we are in the outskirts of Richmond, Virginia, where a man with an eagle-topped cane receives a telegram from his servant Solomon. We know this is Quentin Turnbull, but are not allowed to see his face in order to add mystery for new readers. Turnbull states that the news of Hex in Texas is welcome news and it is just in time for tonight's meeting of the Fort Charlotte Brigade.

That evening, Turnbull and Solomon head toward an old barn filled with about a dozen men in confederate uniforms. Once Turnbull enters, they repeat their solemn vow "Long Live Jefferson Davis and the Old Confederacy and Death to Jonah Hex!"

We then get an 8 page recap of the Fort Charlotte Massacre. However, the black orderly is now white and the Captain has a full head of hair and full mustache. At the end of the recap it is stated "Of the three dozen Confederate prisoners who took part in the ill-fated Fort Charlotte breakout that day, only a handful escaped alive." (emphasis added). Looking at the picture, I can count 13 people. Granted, some of those may have died from their wounds, but then we have a dozen men or so in the barn. I will be gracious and say that some of the men in the barn may be sons, brothers, or fathers of the deceased (not unlike Turnbull). There is no clear way to get an accurate account of the survivors of the massacre. 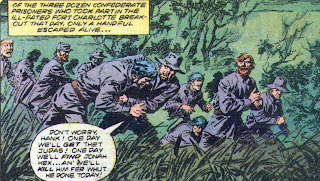 Anyway, Turnbull announces that Hex is in Texas and they all swear to ride out there and have their vengeance. To be continued...

Statistics for this issue
Men killed by Jonah - 2
Running Total - 263
Jonah's injuries - none
Timeline - No real way to tell, but it appears to take place after the last run in with Turnbull so this is probably around 1878?

I think you mixed up AZ and NM since it's not really possible to ride "clear across AZ and then halfway across NM" on the way to TX. It's a little more probable (although still unlikely) that they started in AZ and then rode through NM to hit TX. Since it takes 8 hours for me to get from Amarillo to Santa Fe, I still doubt they could have made it. Gotta love DC. At least they're not retconning the last 20 years of their universe.....oh wait....

Jonah Hex is the old west equivalent of Chuck Norris. Of COURSE he could ride over three states in a day or so! On horseback. Dragging corpses.

I think you meant to say that Chuck Norris is the modern day equivalent of Jonah Hex. And Jonah wasn't on horseback, he was carrying the 4 horses, 2 corpses and a bound outlaw.

That, or the geography on Earth-1 isn't the same as here on Earth-blog.

You're right of course. Chuck Norris may be awesome, but NOT as awesome as Jonah Hex.

Ayers & Dominguez really did a bang up job with the bacdrops imo...classic art never dies...it just rides into the sunset.

...so, if Chuck Norris is the modern day equivalent of Jonah Hex...who is Steven Segal the equivalent to?!? hehe ;)

ps - i'm really enjoying coming to your blog everyday and reading up on Hex and his MDK stats.