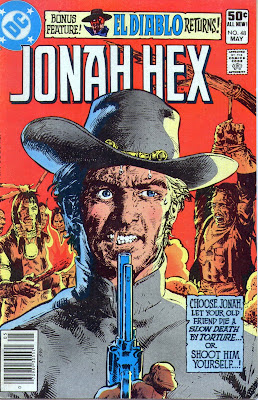 A hail of gunfire and Jonah Hex cuts down 4 liquor bottles in their prime. Well, actually, AFTER their prime since they're empty. Jonah is just target practicing, but the gunfire brings Ling running out of the house to see what the ruckus is about. Jonah says that he did promise to give up bounty hunting, but target practice isn't bounty hunting. Just then we see a man on the horizon leading a horse. The man starts shouting to Jonah and it turns out to be an old friend of Jonah's, Samson Graves.

Graves is an uncouth, tobacco spitter that rode with Jonah back in the Army scouting days. Graves says that he heard a rumor that Hex got himself hitched and hung up his guns. The two men go walking off for the farmhouse, laughing and joking about old times.

Jonah starts to explain that it isn't a good idea, but Graves interrupts and explains to Mei Ling how the two men were scouts for the 4th Cavalry, riding point against the Paiutes.

One day Graves finds a small Indian girl drowned in a pond. He pulls her out and is suddenly surrounded by several dozen braves. He is taken to their camp, tortured and then tied down and has his fingers cut off, joint by joint. Jonah comes riding into camp, shooting like a wild man, throws Graves onto the back of his horse and rides off, saving Graves life. Graves explains that the fingers of his gloves have wooden pegs to fill them out, but he would be happy to remove the gloves rather than be ill-mannered. Mei Ling balks and suggests that he leave them on.

After dinner Graves says that he needs Jonah's help. Graves has been followed by Indians for several days. He stopped at a creek to get some water when he was surrounded by Crow Indians. Graves killed them all but one, which got back to the rest of the tribe and they have been hounding him for days. Jonah says that he'll go see what can be done and gets his rifle down. Mei Ling wants to know what is going on but Jonah hardly explains anything and heads out with Graves.

They ride all night and catch up to the Indians following Graves. Up in the hills overlooking the Indians, Jonah, using binoculars recognizes the leader, High Hands Bear, and old friend of his. Jonah decides to ride down and talk when suddenly Graves jumps up and starts shooting and screaming that they are under attack. 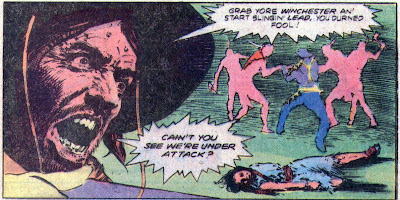 Jonah grabs Graves rifle and beats the crap outta him and they suddenly find that the Indians have them surrounded.

Jonah asks High Hands Bear what is going on. High Hands explains how Graves, at the creek mentioned earlier, shot and killed four innocent Crow children and that according to the treaty the US has with the Crow nation, they can take Graves back to their tribe to face trial. The Indians grab Graves and he starts screaming that he can't go back, the Indians will torture him again and that he can't go through with it. He is screaming and begging Jonah to do something, to stop them, to help him, to do anything. 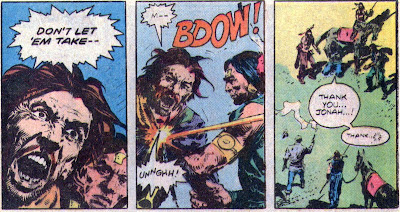 Jonah shoots Graves in the heart and as Graves falls to the ground, he thanks Jonah. Hex mounts up and rides back home.

At home, Jonah can find no sign of Mei Ling and takes off looking for her. He eventually catches up to her wagon. Ling explains that she cannot be married to a rifle and sixguns. Jonah asks if she no longer loves him but she says that she does, but she also loves herself enough not to live in a violent storm. Jonah swears that it will never happen again. They swear their love for each other and ride back home in the wagon. 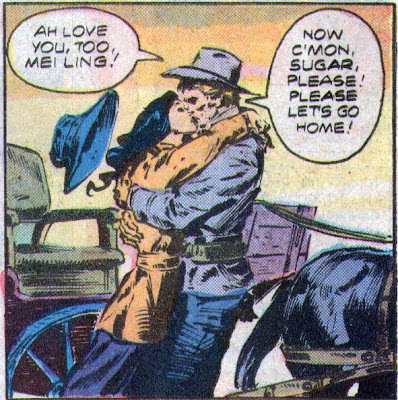 Statistics for this issue
Men killed by Jonah - 7, 6 Indians in the flashback and Graves
Running Total - 323
Jonah's Injuries - None
Timeline - No indication of how much time has passed since last issue

This was a pretty good story. DeZuniga's artwork was top notch and from some of the panels you could get a sense that something wasn't right with Graves. Jonah, at the end, was pretty cold-blooded, killing Graves like that, but it also seemed like he was also helping a friend. I just wish the cover didn't give the ending away. We also get a taste of Mei Ling's commitment to how she wants her marriage to be. This story could have been better if it wasn't only 17 pages, but we do have a backup with El Diablo (which he deserves his own recounting of all his adventures, once I finish with Scalphunter & Bat Lash?)

Next Issue: Corn poppin', skinny dippin' and up-chuckin'. Just a normal day at the Hex's
Posted by Dwayne "the canoe guy" at 10:11 PM

There were a couple of panels where Mei Ling didn't really look Asian, but overall the work is top notch. The panel with Graves hallucinating (the one shown) had just enough if an eerie feeling to communicate the idea that what he was seeing wasn't really there.

I'm all for you taking on Batlash, El Diablo, and especially Scalphunter--who I'm sure will be played by Thomas Haden Church or somebody...