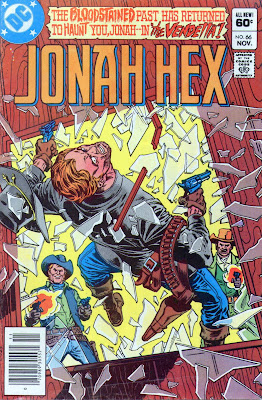 Jonah comes riding into the Palomino Creek stage depot looking for a bite to eat. Without provocation, a man pulls a rifle on Jonah and tells him to dismount. While Jonah is ignoring him and riding on by, Hex is suddenly lassoed and pulled from his horse. He lands on his feet and manages to plant a big boot right into the lasso-wielder's groin. Other men join in the fight and now that the odds are 4-1, with Jonah's arms tied, Jonah succumbs to the repeated beatings that are rained down upon him. Jonah's unconscious body is taken away to Willow Bluff, where the men have a meeting with Banker Rod Webster.

Several hours later, Webster is overjoyed to learn that Jonah Hex is dead, HOWEVER, the rotten bandit that is meeting with Webster informs him that Jonah Hex is NOT dead. He and his gang are holding Hex. Since Webster was so quick to pony up $10,000 ($181,000), they thought they could get some MORE money if they killed Hex, otherwise, they would just let him go. Webster is outraged, but what can he do? He agrees to fork over another $10,000 when he has Jonah Hex's head in a gunny sack. 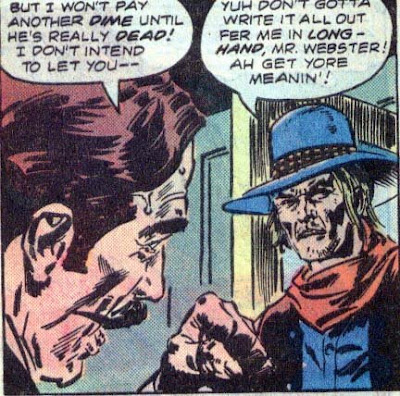 Meanwhile, Jonah is tied up in the blackmailer's cabin, where four men are playing poker. Jonah has learned from overhearing their leader that Rod Webster is behind all of this. While the men aren't watching, Jonah rolls a flaming log out of the fireplace and burns through the ropes holding his hands behind his back. He unties his feet, grabs his pigsticker from his jacket and quickly delivers it into the throat of the first guy that notices the escape. Hex grabs a rafter to swing from it and catapult himself into the three remaining kidnappers.

Once they are down, he grabs his pistols from a nearby hook only to learn that they are empty of bullets. Discretion being the better part of valor, Jonah dives through a window, escaping a hail of gunfire. Jonah mounts up and routes their horses so they can't follow him.

Several hours later in Willow Bluff, Rod Webster is locking up the bank only to discover Jonah Hex standing behind him. Webster practically wets himself in fear. Jonah Hex explains that he has mellowed somewhat over the years and will give Webster until noon to pack up and leave town. Rod Webster hot foots it home.

At his house, Webster has explained the entire situation to his wife, Stella. Stella wants to be very sure what Webster is asking her to do. Webster wants her to put on a sexy low cut dress, some perfume and see if she can 'persuade' Jonah Hex to leave town and leave Webster alone. Stella cites the fact that she only married Webster for money and since he has kept up HIS end of the bargain, she'll give it her best shot, even though the thought of it makes her sick.

Back at Hex's hotel room, he is looking once again at the photo of he and Cassie and he has a...

Cassie is skinny-dipping is a river when Jonah suddenly appears on the bank.

Jonah teasingly starts undressing and eventually he is in his birthday suit and wades into the water.

Despite Cassie's faltering protests, they come together in the river, embrace and..

END OF FLASHBACK!!!!!!
Whew! that was close! We almost got a NSFW rating on this blog. Whew!

Anyway, someone is pounding on Jonah's hotel room door. Jonah opens the door to find Stella Webster, vamping and slowly disrobing as she saunters into his room. 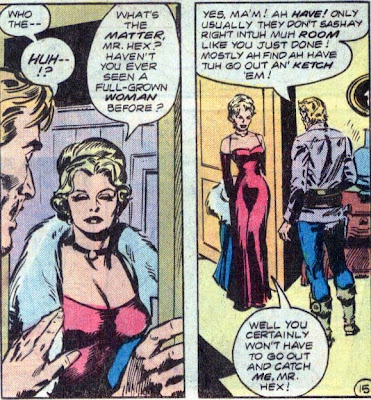 Stella introduces herself and says that she would be happy to 'trade' whatever Hex wants for letting her husband go free. Jonah swiftly manhandles her out of the room, saying that he has a name for a man that sends a woman to transact business for him and 'town banker' ain't it.

Back at the Webster household, Stella sulks into the living room, stating that Hex turned her down cold (something I don't think has ever happened to her before). She then states that she wishes that he hadn't because he is more a man than Webster will ever be. With insult added to injury, Webster storms out of the house and over to the cabin of his hired thugs.

At the cabin, Webster DEMANDS that they kill Hex and he won't pay them any more money. The leader agrees to the demands, adding his own. Webster will have to let them clean out the bank vault. Webster explodes.

The next morning, Jonah is trying to choke down his breakfast when the mayor comes in saying that Hex has to help him. The mayor explains that the bank is being robbed and Jonah states that it's a good thing he doesn't have any money in that bank. The mayor corrects him, stating that the town council has a standing reward of $2,500 on anyone trying to rob the bank. Jonah multiplies that by four in his head and is immediately out the door.

Inside the bank, the robbers and Webster are waiting for Hex to show up. The leader decides that they better get going before Hex gets there and when Webster realizes that he has been double-crossed again, they pistol whip him to the floor. The four robbers hightail it outta the bank, but Jonah jumps from the bank room, flattening all of them. He grabs one of them, throwing into the others, but the gang leader recovers and draws on Jonah.

As the leader pulls the hammer back on his pistol, Jonah draws and shoots him dead. Webster comes staggering out of the bank, thanking Hex for stopping the robbery, but the surviving gang members are having none of his bull. They spill the beans on how Webster hired them to kill Hex and that the bank robbery was their payment for doing so.

By now the whole town is in the street and Webster is screaming his innocence. Hex says that he's pretty sorry that he can't hang around to see Webster hang for his crime and starts walking off. Webster grabs a dropped rifle and gets a shot off, hitting Hex in the right arm. Jonah spins and pulls his pistol left handed. Webster screams and drops to the ground, begging for his life. Hex heads for his horse.

Just then Stella Webster stops Hex in the street and offers to bandage his arm. Jonah notes that she isn't GIVING him that handkerchief and she acknowledges that she want something in return...

And Jonah Hex rides off.

The story? Hot DAMN this was a good one. Webster was such a coward and in the end he got what he deserved, kneeling in the middle of town, disgraced as a man, a banker, a citizen, and as a human. He would have been better off dead, but the town will handle that for him. I would have liked to have seen Stella Webster show up in the books later on, but her one appearance was very, very noteworthy. And I feel that Jonah giving her what she wanted in the end, was more intended to hurt her husband than to fulfill her fantasy.

Next Issue: A gambler's luck runs out, another face on the photo is tracked down, and the final fate of Cassie Wainwright is revealed. 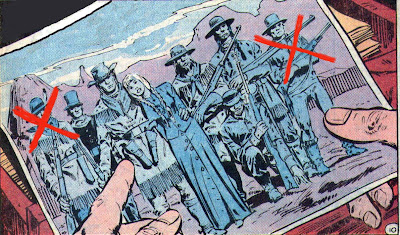 Woohoo! Mostly nekkid Jonah! A very nice story, and one that I need to track down.

You know, for a guy who gets beat up a lot, Jonah has a GREAT bod!