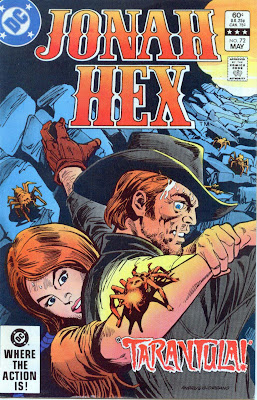 Jonah, disguised as El Papagayo, in order to save Emmie Lou Hartley, who has been kidnapped by the aforementioned Mexican bandit, has broken into the palace of the President of Mexico in order to steal the necklace of Queen Isabella and having gotten his hands on the necklace attempts to escape but is suddenly stopped by the palace guards. (whew!)

Jonah shouts out but then...

The following afternoon the dead body of Jonah Hex/El Papagayo is laid out for viewing as an example of all those who would oppose the mighty Mexican government. The captain of the guards makes mention of the horrible scars that El Papagayo has, but chalks that up to the dangerous life of a bandit band leader.

Two men viewing the body are visibly shaken and leave rather quickly. Turns out they work for El Papagayo and rush back to tell the bandit leader what has happened. Emmy overhears and is heartbroken that Jonah is dead, but Papagayo sees it as a golden opportunity. With the Mexican government thinking that he is dead, there will be very few guards escorting the necklace back to Spain. Papagayo will swoop down like the beautiful Mexican parrot and steal the necklace!

Several nights later, the two thugs we met earlier are in the graveyard digging up the body of Jonah Hex in order to cash in on the matching Dragoons that Jonah was buried with. They finally remove the casket and break open the lid to find... 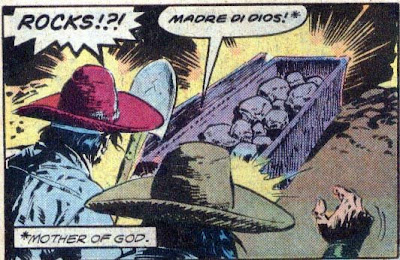 Jonah Hex has turned into a pile of STONES!!!!!

Nope, he has turned into a vengeful monkey and swinging from a tree kicks the holy living crap outta both of them. 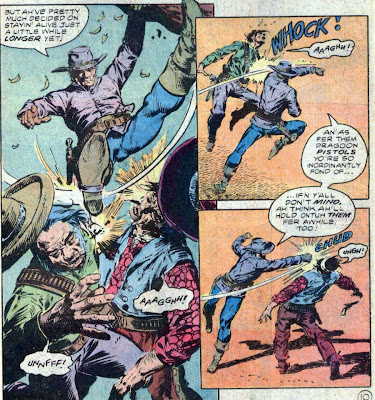 But he's not done! Jonah's fists, seeing what fun his feet had, want in on the action as well.

Jonah subdues the two thugs and then Col. Sanchez appears out of the darkness to take the men captive. The Col & Jonah are congratulating themselves on their wonderful plan to make Papagayo think that the necklace will be unguarded tomorrow and when he attempts to steal it, they shall capture Papagayo (remember the telegram that Jonah sent last issue? Good!). However, the keeper of the graveyard overhears everything and goes rushing off into town.

In town he tells an man named Emilio everything he heard in order for Emilio to ride to Papagayo and warn the bandit leader.

The next day, Hex & Sanchez are leading the troops guarding the necklace as it makes its way to the ship that will take it back to Spain. Sanchez has several hundred men riding just 10 minutes behind. Once they spot Papagayo, Sanchez will fire his pistol twice as a signal for the men to come rushing in. Just then, Sanchez's hat gets shot off his head.

Papagayo and his men are on a hill overlooking the small wagon carrying the necklace. He shouts down that he knows all about the plan and if any signals are attempted, Sanchez will be dead. Papagayo shouts that he has his own bag of tricks and has his men produce that bag. He cuts the bag open and out tumbles Emmy Lou, bound hand and foot. Now, Papagayo makes his demands. Hex must bring the necklace to Papagayo or Emmy gets a bullet in the head.

Jonah quickly clubs Sanchez unconscious and draws on the wagon guards. He takes the strongbox, unlocks it and grabs the necklace. Papagayo and his men ride off with Emmy, leaving Jonah with the necklace to follow.

An hour later, the bandit reigns in his horse at a covered pit. Jonah is clubbed unconscious and tied up then he and Emmy are lowered into the pit. Just as Jonah comes to, Papagayo orders a huge basket of tarantulas dumped into the pit then he and his men ride off.

Back in the spider filled pit, Jonah tells Emmy to cut her ropes on his spurs. She keeps working until she is free, unties herself and Jonah and then promptly feints.

Jonah tosses her over his shoulder and climbs out of the pit.

Later that night, Papagayo and his men are talking about having left Jonah & Emmy to starve. Papagayo mentions that he will be missing the battle of wits with Hex. Just then a lookout returns to the campfire but it is really JONAH HEX!!!!. Jonah pistol whips Papagayo and turns him in to Col Sanchez.

The next afternoon, Col Sanchez thanks Jonah for returning the necklace and Emmy gets a new bonnet. 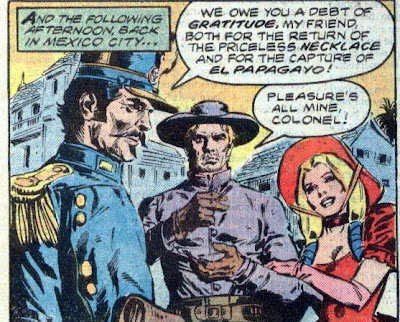 Then, in an unexpected turn of events... 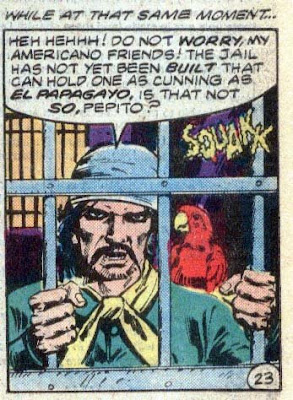 Statistics for this issue
Men Killed by Jonah - 0
Running Total - 385
Jonah's Injuries - Knocked unconscious.
Timeline - This one covers two days + "several days". Let's call it a week. By the end of this one we are probably into Dec 1877

I did like this one. Jonah's death, complete with a Wilhelm Scream, was an agonizing ballet of death dancing, the likes I had never seen before. El Papagayo was a wonderful villain but when is he going to learn to shoot Jonah and be done with it? I didn't care for Emmy fainting, it seemed like Fleisher didn't want to write dialogue for her, so he just had her pass out. The ending was very abrupt and then that weird last panel. Oooooooo, Papagayo is talking directly to MEEEEE. (At least, he didn't get his finger blown off whilst pointing at me.)

And how can you NOT love a book that has this??? 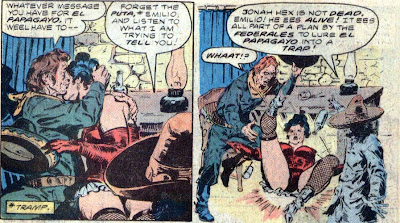 Next Issue: The most Gawd-awful Jonah Hex story ever penned. And that includes all of the Justice League crossovers.
Posted by Dwayne "the canoe guy" at 10:15 AM

For some reason I keep reading Emmy Lou Hartley, as Emmy Lou Harris, which is peculiar, but you have to admit, would be awesome.

Hey, what's a red (female) Eclectus parrot doing in the American Old West? They're from Australia!