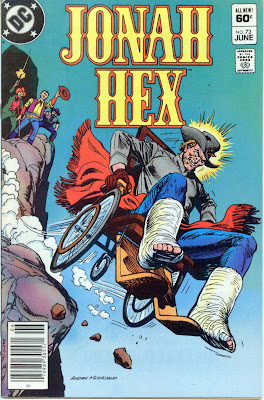 
Good things about this book:
Jose Luis Garcia Lopez did the art

Bad things about this book:
This is an obvious filler issue from 1977-78 when Lopez was doing the art. But let's let the story stand on it's own two feet, shall we? hee hee, I made a funny.

Jonah Hex and Archie Nathanson are hiding in the brush under cover of darkness, scouting a nearby campfire. Nathanson has turned traitor on his boss, Jody Mantlo, in exchange for half of the bounty for bringing in the whole gang. Jonah emerges from the bushes, telling the sentry to drop his rifle and for everyone to ease slowly outta their bedrolls, but Jonah is surprised to find that the sentry is a straw dummy.

Just then Jody Mantlo and six of his men walk into the light of the campfire. they congratulate Archie on leading Jonah into their trap. Mantlo pulls a cigar from his mouth saying... 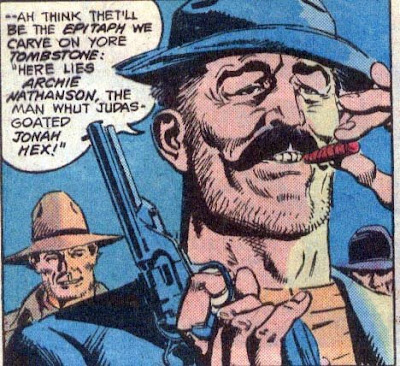 and then his henchmen push the plunger on the dynamite that is in the center of the camp. Jonah and Archie are blown to hell and Mantlo tells the gang to break up and lay low for a couple of weeks until he contacts them about their next job.

Hours pass and the sun comes up. A young Mexican lad with a wagon passes by the carnage and investigates. He determines that Nathanson is dead but Jonah is barely alive. He gets Jonah into the wagon and heads to town to get the doc. At the doctor's office, the boy rouses the doc and they both get Jonah inside. But not before the scene is witnessed by Burke, one of Mantlo's men.

Hours later, Jonah awakens and the doc explains how he came to be in the infirmary. Jonah tosses back he covers and jumps to his feet only to find that both of his legs are broken and are in casts from his ankles to his knees. The doc tells him that he has to stay off his feet for 5-6 weeks, but Jonah is concerned about the Mantlo gang busting in and killing everyone there. The doc assures Jonah that there was nobody on the street in the early hour when Manuel brought him in.

Late that night, Burke knocks on the door to the doc's office. Burke tells the doc that there is a hurt man down the street and then clubs the doc unconscious. Burke slowly makes his way to the infirmary, sneaks in and then unloads both barrels of his shotgun into Jonah's bed. Sadly for Burke, Jonah is sitting in a wheelchair across the room and places one bullet right between Burke's eyes.

Jonah retrieves Burke's shotgun, determines that the doc will be okay and then wheels out into the night to locate Manuel.

Shortly thereafter, Manuel is driving his buckboard back to the sight of the explosion, Jonah in a wheelchair in the back. At the campsite, Manuel wheels Jonah down a homemade ramp and using a lantern Jonah determines the different directions that the Mantlo gang has gone.

Two days later, Wes is playing a good game of poker when a buddy informs him that there is a cripple in a wheelchair that wants to see him. Wes can't be bothered until he hears the voice of Jonah Hex. Wes grabs for his pistol, but Jonah unleashes the shotgun and drops Wes in his tracks. (One should note that Jonah had the brakes set on his wheelchair or else he would have rocketed across the saloon from the recoil).

The next night, Jonah, in his chair, is hiding in the shadowy hallway as Luke emerges from a saloon girl's room. Jonah greets him and Luke states that he has no guns. Jonah says that they're even, Jonah ain't got no legs. Luke takes off running, but Jonah throws a lasso around Luke's neck and strangles him in the hallway.

Unknown to Jonah, Pete, another gang member, is peeking out of his room and sees what happens. He sneaks out and goes to warn Mantlo.

Late the following afternoon, Manuel and Jonah are high atop a hill overlooking a cabin that they think is the hideout of the Mantlo gang. Suddenly they are surprised by Mantlo and the three remaining gang members. As Pete moves forward to push Jonah off the cliff, Manuel tries to protect Jonah. Mantlo guns Manuel down instantly. Pete shoves Jonah and the wheelchair over the cliff and they turn away.

What they don't see is that Jonah manages to stay upright in the chair until he can toss a lasso onto a tree limb and swing out of the chair right before it plummets into the river. Jonah then slowly lowers himself down the rope and crawls through the river until he finds his wheelchair, unbroken on the rocks below.

Jonah sets his sights on a nearby hill so he can get an idea of where the cabin is located. A half hour later he is at the top of the hill overlooking the Mantlo hideout. With a quick shove, Jonah starts his wheel chair rocketing down the hillside, aiming straight for the cabin.

Down in the cabin Mantlo and the guys are relishing the death of Jonah Hex when they hear.. 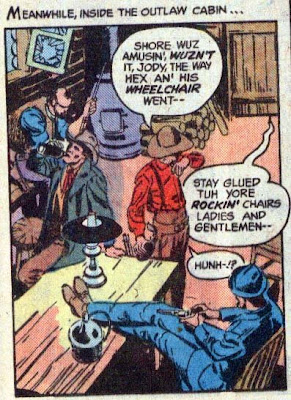 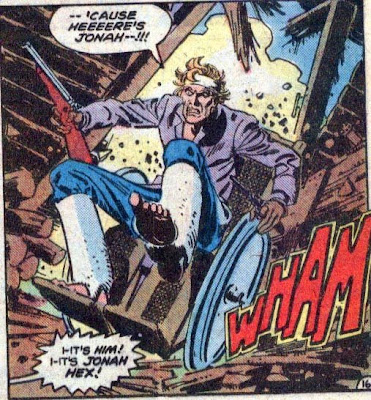 Jonah unloads both pistols into the four men. Laying in the overturned wheelchair, Jonah is surprised when Manuel shows up at the door. Mantlo's bullet only grazed his scalp. He helps Jonah back into the wheelchair and up into the wagon and they head back to town.

Statistics for this Issue
Men Killed by Jonah - 7
Running Total - 392
Jonah's Injuries - Two broken legs
Timeline - This story covered 4 days. Since Jonah makes a reference to the Spirit of '76, this one happens after 1876 but there is no mention of the marriage. Not that THAT means anything.

Wow, how do I begin to rail against this story? From the indestructible wheelchair to Manuel's titanium noggin to the broken legs of Jonah Hex smashing in a wooden cabin door along with a pop culture reference to Johnny Carson, this story just reeked. The only thing that makes it a joy to look at is Lopez's artwork and distinctive style for each gang member. When I open this book, I look at it without reading it, kinda like watching a movie with the sound off.

The rest of the issue had an El Diablo backup. yaaawwwwn.

Next Issue - We're back into regular continuity and Jonah Hex attempts to bring Bill Clinton to justice. No, I'm not lying!!!
Posted by Dwayne "the canoe guy" at 6:00 AM

You have to admit that it has a pretty eye-catching cover however, with that "Oh Crap!" look on Jonah's face, and the gang busy dancing with glee at the top of the cliff.

Did they USE plaster and casts for broken limbs back then?

Yes yes yes!
JOSE LUIS GARCIA LOPEZ!!!
I wish that there were many many more stories told by Jose Luis Garcia Lopez's pen and ink.
Sigh!
Thank you for sharing.