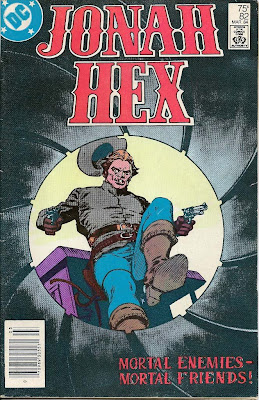 This issue starts a few seconds prior to last issue ending. El Papagayo is standing atop a cliff overlooking a buggy below, racing away. The buggy carries Jonah Hex and Quentin Turnbull as they try to escape from the Mexican bandit. A henchman hands a pair of binoculars to Papagayo, but they are so out of focus that Papagayo is seeing double when he looks through them.

Meanwhil in the buggy, Turnbull has located a note that Papagayo left in the buggy. It reads "Jonah Hex, my good friend, Adios." Jonah orders Turnbull to jump and forces him and their captured Mexican bandit out of the buggy.

Up above, Papagayo has focused on the dynamite strapped to the bottom of the buggy and sees the buggy blown to smithereens. The henchman starts celebrating that they have killed the "horse-faced" bounty hunter. Papagayo pulls a pistol and sticks it in the man's face, warning him not to speak ill of Jonah Hex.

Luckily, down below, Jonah Hex, Turnbull and their captive have landed on a narrow ledge that they landed on over the edge of the cliff. They successfully escaped the blast, but the ledge gives way underneath the prisoner. He falls and Jonah grabs the man's sleeve, but he is wearing cheap bandit clothing and the sleeve rips, dropping the bandit to his death. Turnbull is aghast at the man's death and Jonah comments on how squeamish Turnbull is for a villain.

Papagayo and his men have come down to gloat over the smoldering wreckage of the burning buggy. The henchman notices Hex & Turnbull climbing down the cliff face and pulls his rifle. He takes a bead on them and El Papagayo shoots the henchman in the back. Papagayo shouts over the cliff edge that Hex has escaped fair and square and that he will have to kill Hex the next time they meet.

Meanwhile on a stagecoach several hundred miles away, Emmy Lou Hartley is on her way to St. Louis. She let's her mind wander back in time, when her family left St. Louis only to end up captured and slaughtered by the Crow Indians. Emmy did what she had to do to survive

"Wapati notoma tahani" is Crow for "Bow-chicky-bow-wow!"
and eventually escapes, only to be rescued by Jonah Hex. She and Jonah fell in love but now she is running away in order to save some small part of her heart.

Back at the base of the cliff, Turnbull and Hex have climbed completely down the side of the cliff and start making their way to a nearby farm.

In town, J.D. Hart and Mei Ling have returned from their ride. Hart comments that Mei Ling seems to be hundred miles away but she needs to stop blaming herself for something that wasn't her fault. Hart continues to tell her that folks get into bad marriages all the time. She needs to turn her back on Jonah and continue on with her life. However... 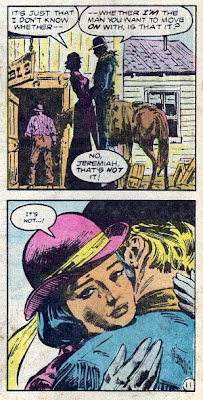 At the farm, Jonah & Turnbull buy a couple of horses from the farmer and head for town. On the ride back Turnbull states that Hex has saved his life more than once. Turnbull is a man who pays his debts, therefore he will file a sworn affidavit exonerating Jonah of any responsibility in the death of Governor Phelps. However, there is nothing that Jonah could ever do for Turnbull to make up for the death of his son Jeb. Turnbull vows to put Hex into an early grave over that situation.

That night, J.D.Hart and Mei Ling are leaving a restaurant when they are suddenly surrounded by five men. The men plan on kidnapping Mei Ling in order to lure Jonah Hex into their trap. Hart attempts to stop them and they unload a bullet into Hart.

Shortly thereafter, Jonah & Turnbull ride into town and see the crowd in front of the hotel where Mei Ling was staying. Jonah takes off and Turnbull shouts that he will file the paperwork and then their feud will renew. Jonah sees that Hart has been shot, but only in the shoulder. Hart quickly explains what has happened and he and Jonah ride off after the men.

Hours later, they track the men to a railroad switching yard filled with train cars. Down in the rail yard, one thug is standing guard on the ground and one is atop a rail car. Jonah climbs up the side of the car and pistol whips the guard. The guard on the ground hears the sound and turns around. Hart slaps a pair of handcuffs on him and punches his lights out. Hex continues running across the rail cars and jumps down, kicking two thugs in the head. The final thug stands guard on the end of the rail car when he is suddenly splashed with... 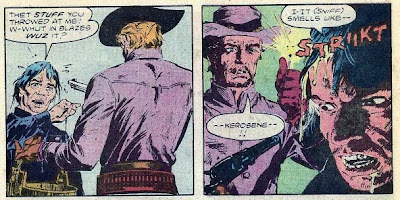 kerosene. Jonah appears next to him and lights a match. The thug starts screaming and when Jonah demands to know where Mei Ling is, the thug points to a nearby caboose.

Hart runs over to the caboose and jerks the door open. He finds Mei Ling and unties her. She jumps up and throws herself into Hart's arms, but just then Jonah walks in and sees them in an embrace. Jonah is mad as hell and starts advancing on Hart. Hex lands a right and a left to J.D.'s jaw and Mei Ling starts screaming that Hart's arm is hurt.

Jonah puts his left arm behind his own back to make it even and continues to beat J.D. unconscious and then storms out of the caboose.

The next morning the stagecoach carrying Emmy Lou is stopped by three robbers. They demand that everyone disembark from the coach. The bandit leader demands that Emmy grab her luggage, cut a coach horse loose because she is coming with them!

Statistics for This Issue:
Men killed by Jonah: None
Running Total: 408
Jonah's Injuries: None
Timeline: We are still in April 1878. Just one day has passed since last issue.

Things just keep snowballing. We wrap up the short Papagayo interlude, finish up the Turnbull/prison ploy, and we get an new twist in the saga of Emmy Lou. A ton of stuff was crammed into this one, despite the two page repeat from last issue. Pro's in this issue:
Next Issue: The violence escalates, the truth behind Emmy's kidnapping, Jonah gets saved, and (I hate to say it, but I knew it would come to this) the end of Matching Dragoons!
Posted by Dwayne "the canoe guy" at 5:59 AM

No, not the end, anything but that!

Sorry to say that it is true. I hope to have everything explained on Monday.