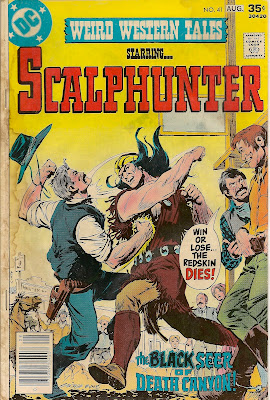 Summer, 1862. Brian Savage finds himself riding near the Canyon De La Muerte when he hears a man screaming for help. Turns out several men are terrorizing an old prospector when one of them is suddenly shot to death. Several of the men take off towards the cliffs where the shots came from, leaving behind one man to guard the old prospector. But, that idea doesn't pay off too well... 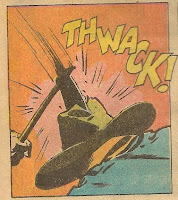 Brian grabs up the old man and runs off with the old man and his burro and attempts to nurse him back to health. The old man tells Brian that he was searching for his old pal Skeeter Short. Brian has to tell Skeeter that the old man, Muskrat Charlie, finally hit it rich and that he hid the map. All you have to do is look through the eye... the eye...needle....PLOTZ!! He's DEAD!!!!!

Brian buries the old man and the rides off with the man's burro in tow.

The next afternoon in a nearby town, the thugs that were killing the old man recognize the burro as Brian rides into town. They get an idea and tell the sheriff that Brian murdered the old prospector and stole the burro. Brian says that they are lying, that the men killed the prospector and resists the sheriff's attempt to jail him. One of the thugs pistol whips Brian, knocking him out.

Several hours later, the sheriff is bringing Brian a meal in jail, but when the sheriff tries to awaken Brian, he learns that the form on the cot is just a bundle of blankets. Brian drops from the ceiling and knocks out the sheriff and sneaks out the second story window of the jail. He jumps from the balcony onto a buckboard below, knocking out the driver, and then steers the team towards the livery. As he nears the livery, he jumps off, leaving the woman passenger at the mercy of the runaway horses.

Brian bursts into the livery in order to obtain his horse. He refuses to pay and rides off into the night. In the darkness the sheriff and the thugs laugh to themselves about how easily they let Brian escape so that he could lead them to the map and the treasure.

Several hours later, Brian rides up to needle rock and climbs up so that he can see through the eye. In the distance he spots a rock with a large X on it. Brian climbs down and heads over to the X and finds the map. Just then shots ring out and Brian topples over, the thugs come out of hiding and close in to recover the map.

Just then one of the thugs notices an African standing on a nearby boulder. The African is glowing and is wrapped in a large snake. Suddenly a spear pierces one thug, killing him, and the African vanishes only to appear behind them. He hurls the snake at the sheriff who gets squeezed to death and the remaining two thugs take off. 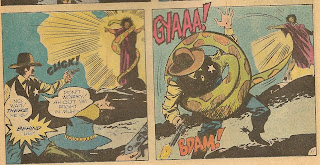 The glowing African then picks up Brian and takes him to a cave. Three days later when Brian comes to, the African explains that he is Wakwame, a shaman, a seer, a magician, a necromancer who can see the future and speak with the dead. He tells how he was kidnapped from Africa and there was a great revolt on the slavers ship. The slaves managed to kill the white men, but the ship crashed at sea and only he survived.

He gives Brian the map and tells Brian that the treasure house shall be the white men's tomb. Brian thanks him for his help and rides off.

A week later, Brian is riding along and finally locates Skeeter Short. Brian tells the story and Short busts out laughing because the map is for a mine full of fool's gold. Short says that Muskrat must have been senile and thanks Brian for his trouble. Brian rides off and suddenly Short is gunned down.

Brian hears the shots and rides back to find Short dead and the map gone. Brian has seen the map and knows where the mine is located.

At the mine, several of the thugs enter the mine and leave Lance to guard the entrance. They go in and find several bags of gold nuggets and then they realize that it's nothing but fool's gold. They look deeper into the mine and that's when they spot the real gold, further into the mine. Just then Lance stumbles into the mine with a large arrow sticking out of his chest. The thugs whirl around and see Brian standing at the entrance of the mine. One of them opens fire with his rifle and that sounds causes the entire mine to come crashing down on their heads, killing all of them.

Brian rides off, thinking about Wakwame. 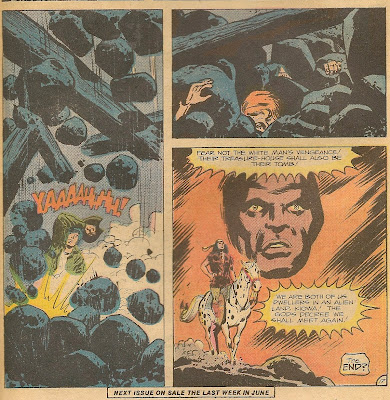 All in all kind of a 'meh' story but it was nice to see Brian encounter an African witch doctor and what the witch doctor did with the glowing and the vanishing and the snake did help the book live up to the Weird in Weird Western Tales. The bit with Brian leaving the woman in the buckboard (and probably resulting in her death when the wagon eventually overturned) was a bit unsettling. I know it was supposed to be funny, but it really wasn't.

Next Issue: A bank robbery, blood in the snow, and the start of an ongoing story arc.
Posted by Dwayne "the canoe guy" at 5:39 PM