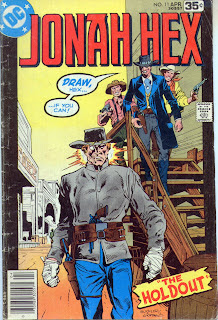 The story opens with Jonah in a saloon casually watching a poker game at a nearby table. One man comments that he is cleaned out & gets up to leave. The remaining players ask Jonah if he would like to sit in on the game. Jonah states that his father always told him to stay out of crooked poker games and then he dumps a beer on the head of the dealer. The guy leaving the table protests that the dealer hasn't even been winning. Jonah points out that the other two men have been doing all the winning and then grabs the dealer's arm, revealing a gizmo called a holdout that allows the dealer to keep a card up his sleeve and then pop it into his hand when he needs it. Jonah tells the man that lost the game to pick up his money and leave, he also asks if there is an undertaker in town. The man says that there is and Jonah says that the undertaker needs to get three coffins ready.

The man heads out of the saloon. Three men involved in the poker game start to draw on Hex, but one of them realizes who Jonah is and he backs out of the gunfight. The other two draw on Jonah and Jonah shoots them dead. Now this is the confusing part. There were three men involved in cheating in the card game and the dealer was wearing blue. Three men started to draw on Hex, one backed out and Jonah shoots two men dead, one of them wearing blue. Turn the page & what do we see? Jonah holding a gun on the dealer, who is alive & wearing a blue suit. This was pretty sloppy visual storytelling. (& it wouldn't have happened if Lopez was doing the art). Jonah takes the holdout from the dealer and leaves.

Later that night, the dealer, Preston, and the man who backed out of the gunfight, Sleeze, are standing around when a woman in red comes up & says that she is looking for Jonah Hex. She asks if they have seen Jonah and they acknowledge that they have. They realize that she is probably a friend of Jonah's so they pull knives and threaten to carve up her face. She screams and Jonah, resting in a nearby hotel hears her. He ends up kicking Sleeze in the head

and beating the snot out of Preston. When he is done Jonah turns to be sure the woman is okay and learns that it is none other than Joanna Mosby! Then he gets smashed in the head with a 2x4.

A black man, Lupo, is standing over Jonah and asks Preston if he wants Hex killed. Preston has Lupo drag Jonah over to a hitching post. They tie Jonah's arms out to his sides and then, using a nine-pound sledgehammer, they smash both of Jonah's hands. 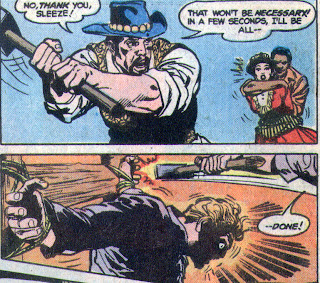 Preston tells Joanna that he will be gone to Abilene for three weeks. If Jonah is still in town when he gets back, Preston & his men will kill Jonah.

Joanna gets Hex to a doctor and we next see Hex with both hands bandaged. The doc says "..your hands won't heal for weeks, maybe months! And as for the scars on them, I'm afraid you'll have those for the rest of your life!" But wait, what would a real doctor say? I asked one & he replied with

Assuming the bones aren't knocked too far out of position (not a safe
assumption, really), then 4-6 weeks is a standard healing time. If the
bones are displaced, then the healing time is about twice as long and
the hand would heal abnormally, possible with some loss of function.

People can function with broken hands and fingers surprisingly well.
There is a lot of pain and swelling, but it can be done. Depending on
how the bones heal, there may be some loss of function, and there will
definitely be some bad arthritis in the future.

The doctor leaves Joanna & Jonah alone. She explains that she has been following for months, wanting to explain how she was hoodwinked by the Chameleon. Jonah tells her to forget it & put out the lamp, he needs his rest. Joanna douses the lamp and she approaches Jonah's bed. He says that he won't be able to hold her and she replies by kissing him deeply.

The next day Joanna comes into the room having returned from the store. Jonah has torn off the ends of his bandages so that he can use his fingertips. He is toying with the holdout. Jonah asks Joanna to help him get dressed and he borrows her small derringer. Jonah then rides quite a ways from town and starts target practicing with the derringer in the holdout. Whenever he squeezes his arm to his side, the holdout springs down his sleeve, placing the small pistol in his hand. He can then squeeze the trigger with his fingertips.

How tough is Jonah? Well, his hands are mangled, he is using a gizmo to toss a pistol down his sleeve, he is using a very inaccurate derringer so he decides to practice LEFT HANDED!!! 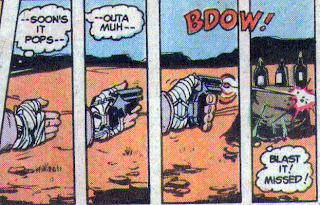 He literally practices for weeks, riding out at dawn, back in at night. Finally he can snuff candles at about 6 feet. He never tells Joanna what he is doing since she betrayed him once before.

Several days later Preston comes back to town. Talking to Sleeze & Lupo he learns that Jonah is still in town, even though he leaves every day. Preston tells the two thugs to follow Jonah out of town and kill him. Sleeze & Lupo decide to take the easy way and the next morning they just meet Jonah on the edge of town. They draw and start mocking Jonah with his broken hands. Suddenly the derringer pops down his sleeve & he plants a bullet in Sleeze's brain and one in Lupo's heart. Who's laughing now,, laughing boys?

Preston is in the general store telling the store owner about Sleeze & Lupo going to kill Jonah. Joanna is shopping and overhears the talk. A man runs in the store and tells Preston that Jonah is in the saloon looking to kill Preston. Preston draws his pistol and heads across the street. Joanna grabs a shotgun off the wall and heads out behind him. Preston is standing in front of the saloon and calls Jonah out.

Jonah steps out of the saloon and just as Preston is going to shoot Jonah, Joanna comes running down the street, shouting Jonah's name. The two men turn towards her and Joanna unloads both barrels into Preston. As he falls to the ground, dead, he squeezes off one shot that hits Joanna. Jonah runs over to her and holds her. She gasps out that she had to do something because a girl just can't stand by and let her man get....get....

Jonah holds her a moment longer, kissing her cold dead lips, and then carries her off down the street. 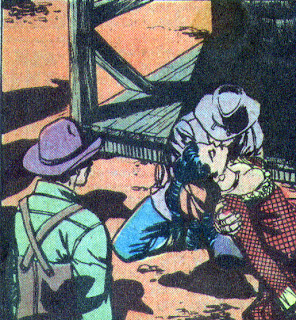 Running Total - 155
Jonah's injuries - Another crack across the skull and two badly broken hands
Timeline - There is no mention of Jonah being a wanted man but this does take place several months after issue #4 where he ran into Joanna Mosby, therefore he is still a hunted man. So this one must take place somewhere around 1876-77.

I didn't care much for this issue, the artwork was ok but the story was very pedestrian. Jonah getting his hands broken was a good idea, but I didn't believe how quickly he could recover or use his fingers. Joanna Mosby was a great character but I would have rather seen her used across two issues and having the reader try to guess if she would backstab Jonah again this time. A good character wasted in my opinion.

Next Issue: - Pole-fighting, Gator fighting, and the swamp with the highest elevation in the world when Jonah takes on The Search for Gator Hawes!!!!

If memory serves, this is the issue where the artist refused to draw Jonah kissing the dead girl because he thought it inappropriate.

Goodness! I don't have this one, but it does look pretty good. Derringers are wildly inaccurate, which is portrayed pretty well here.

Jonah has a worse record with girlfriends than Kyle Rayner, and that's saying something.

Sleez, you're correct, but the artist was forced to go ahead and draw what was written.
See here.