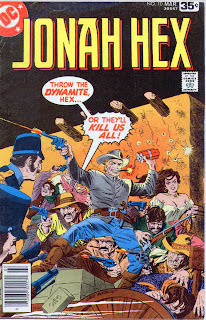 Jonah has just killed Pablo and is getting to ride away and one of El Papagayo's men has Jonah dead in his sights. Just as the henchman is about to pull the trigger, Papagayo stops him, reminding him of the letter that they found in Jonah's saddlebag. The letter is from Mexican President Diaz authorizing the commander of the fort at Vera Cruz to turn over the treasure of Carlota to Jonha and a band of Mexican soldiers. Papagayo says that only a crazy man would kill the goose that lays the golden eggs.

But...isn't that exactly what Papagayo tried to do last issue when he tied Jonah to an ant hill? Noooo, not Papagayo! He and Jonah are old friends and he just wanted to teach Jonah a lesson not to mess with an old friend. Also, Pablo was a stinking pig and Papagayo didn't have the heart to kill his brother-in-law, Pablo, so he set it up so that his good friend Jonah would do it for him. If you believe THAT, I know of some swampland in the Oklahoma panhandle that's for sale.

ANYWAY!!!!... Jonah and the Mexican troops continue on to Vera Cruz with Papagayo and his men following. Eventually Papagayo springs an ambush, killing all of the Mexican soldiers. His men strip the soldiers of their uniforms and dress up as the soldiers. They take everything, including a beautiful ivory-handled pistol inlaid with gold. Now Jonah and the fake Mexican army are headed for Vera Cruz.

Ten days later, hex & company ride into the fort and deliver the letter to Gen. Rumolo. Rumolo & his lieutenant guide Jonah & Papagayo to the treasure while the rest of the bandits are treated to dinner. The General informs them that the treasure of gold ingots is worth five million dollars (about 88.6 today). Suddenly a corporal runs in shouting that there is a fight in the fort. They hurry out into the courtyard to find Lt. Lopez beating the living tar out of one of Papagayo's men.

Lopez explains that his opponent is carrying an ivory-handled pistol inlaid with gold, exactly like the pistol that Lopez has. these pistols were a gift from Rumolo himself to Lopez and his brother when they served under Rumolo in Sonora. Papagayo's henchman claims that he purchased it, but Rumolo knows that Lopez's brother would never have parted with the pistol willingly. He declares the henchman a thief and to be taken and shot. The henchman panics and shouts "Papagayo!! Don't let them shoot me!"

Needless to say, that's when all hell breaks loose. 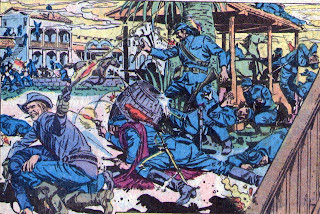 With each side taking cover on opposite sides of the courtyard, a fierce battle ensues, but Jonah, Papagayo & his men are outnumbered and overwhelmed. Rumolo announces that they will all be shot at dawn. Jonah protests and gets a riflebutt to the head.

Jonah comes to in a cell with Papagayo. Just then an old woman with a parrot on her shoulder shows up, bringing a basket of food for the prisoners. The soldier guarding the cell tells the shawl-covered woman to leave, but she pulls a dagger and stabs the guard to death. She unlocks the cell and reveals herself to be Estrellita and, of course, the parrot is Pepito, sent by Papagayo to her with a note explaining what she was to do. She frees the rest of the men and they get ready to make their escape.

Rumolo is awakened by an explosion. Hex and the bandits have gotten into the munitions shed and while the gold is being loaded into a wagon, dynamite is being tossed at the Mexican Army to hold them at bay. Eventually the wagon with the gold, Hex, Papagayo, & Estrellita gets out of the fort and makes a getaway. They travel for quite a ways until they come to a broken bridge. The bridge, supported by ropes and made of slats, has snapped from their side of the canyon and it dangles from the opposite wall of the canyon. Papagayo pulls a pistol on Hex and forces him to fix the bridge.

Jonah takes a rope and manages to toss a lasso around a tree limb on the far side of the canyon. He is going to swing over, with a rope tied to his waist and then tie that rope to the bridge, allowing the henchmen to pull the bridge up to their side of the canyon. But the tree limb breaks and Jonah falls into the canyon, grabbing the end of the bridge at the last second. Papagayo's men then pull Jonah and the bridge to safety. Finally the bridge is repaired but Jonah notes that it can't hold the weight of the gold-filled wagon. Papagayo orders the men to unhitch the horses and unload the wagon.

They walk the horses across and transport the gold bar by bar. They are down to the few remaining bars and the wagon. All of Papagayo's men are on the bridge when he tells them that they can keep the remaining gold to themselves and then he slices the ropes to the bridge with his sword. With all of his men dead in the canyon, Papagayo pulls a pistol on Hex and is about to shoot him when Estrellita stabs Papagayo in the back, killing him. She tells Hex that he always treated her like dirt and now she and Hex can take the gold and be together.

Suddenly Estrellita falls from a gunshot in the back. Papagayo manages to choke out "Puta" before he dies. Estrellita and Papagayo are both dead and it starts to rain. Jonah starts to get on a horse and find some cover when he notices that the gold is running off of the bars. They turn out to be nothing but lead ingots covered in cheap paint. Jonah rides off, swearing to start doing something simple, like running a general store.

In the epilogue Col. Sanchez arrives in Mexico City with the gold shipment delivered to President Diaz. Diaz commends Sanchez of his brilliant plan to hire Hex to guard a fake shipment while the real shipment was sent out three days earlier by a different route. Diaz says that they must write a note of thanks to Hex for his work.

Statistics for this issue
Men killed by Hex - It's hard to tell in all the gunfire so I won't even guess. Ok, I'll guess, let's say 10.

Running Total - 151
Jonah's Injuries - riflebutt to the head
Timeline - Taking place immediately after the prior issue, let's place this one in 1877

I love this issue! One of my favorites. All the stories with El Papagayo are very Spaghetti Western in my opinion...
Take care!

This is really a very good issue, I love all the double-crossing. Reminds me a little bit of "Ballad for a Coffin", which was Lt. Blueberry.

Just once, couldn't they build a REAL bridge?