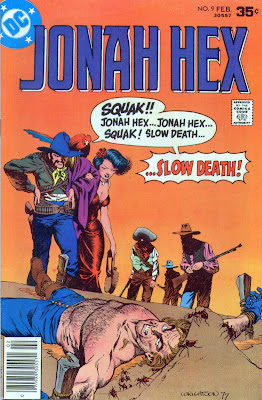 It's about time we get back to "Jonah Hex, Wanted Man!!" Our story starts off with a shirtless (& pantsless) Jonah bathing in a watering hole in South Texas. A Mexican youth grabs all of Jonah's clothes and guns, jumps on a horse & rides off. Jonah jumps out of the water, naked as a jaybird (one without feathers), grabs some spare jeans from his bedroll, jumps on his horse & gives chase. Determined to retrieve his Peacemakers, he follows the youth across the Rio Grande into Mexico. He corners the thief in a box canyon, lassos the punk and then proceeds to slap the living tar out of the thief. It is then we learn that the thief is a woman! We hear some laughter and Jonah looks up to find himself surrounded by the Mexican army, lead by Col. Sanchez. Sanchez explains that he sent Estrellita to Texas to lure Jonah into Mexico so that Sanchez could offer Jonah a job. The president of Mexico, Porfirio Diaz (placing this story in 1876 or early 1877), is offering Jonah 100,000 pesos to complete a mission for him. If Jonah refuses, then the Mexican army will kill him where he stands and collect the $10,000 reward on Jonah's head.

Jonah decides to listen to the job offer. A flashback ensues. From 1864 to 1867, Mexico was ruled by the Austrian archduke Maximilian and his wife Carlota, having been installed as Emproer of Mexico by Napoleon III. It seems that during their reign, Carlota engineered the looting of the Mexican treasury and had the gold bullion moved from Mexico City to a secret cave near Vera Cruz. Carlota's personal bodyguards murdered all the army troops that were involved in the transport of the gold and had planned on eventually moving all the gold to Europe. Before she could get it moved, Benito Juarez overthrew Maximilian and had him executed. Carlota fled to Europe and eventually went insane from the grief.

For eight years (again, placing this story in 1876/77) the treasure was lost until a peasant stubled upon it in the cave. The Mexican government was notified and the army moved the treasure to a fort a few kilometers from the cave. Diaz is ready to move the treasure back to Mexico City but he knows that every bandit in the country will be after the treasure. He wants Hex to guard the treasure along with the president's personal honor guards that have accompanied Sanchez. Sanchez gives Hex a letter from the president, bearing his personal seal, authorizing the commadant of the fort to turn the treasure over to Hex. Sanchez tells Jonah that Hex can stay in a nearby town to eat & get some rest before they head out after sundown.

Jonah rides into Punta Del Rojo and checks in at the local hotel. When he walks into his room he notices a parrot feather on the floor. As Jonah turns quickly he is shot by El Papagayo. Jonah falls to the floor. One of Papagayo's lackeys runs over and says that Papagayo missed Hex, he only grazed Jonah's head and knocked him out. Papagayo says that he never misses. He is the world's greatest gunman and then he shoots the lackey right between the eyes, proving that he grazed Hex on purpose. Jonah awakens shortly and Papagayo tells Jonah that his feeling are hurt. Jonah, who is his good friend, comes into Mexico without telling Papagayo, but Papagayo has learned that Jonah is in Mexico because Estrellita (sporting a special Helium filled bra, designed by Howard Hughes) , 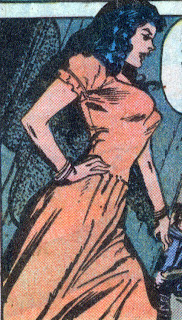 Papagayo and his men lead Jonah outside of town, strip his shirt, boots & guns and tie him spread-eagle on an ant mound. Papagayo and his men ride off, leaving Jonah to be eaten by the ants and with fat Pablo also left behind to guard over Jonah, to be sure that he doesn't get away. Jonah is left in the sun for hours and Pablo is sitting nearby drinking from a canteen. Jonah asks for some water, but Pablo says that he is supposed to stay away from Jonah, because Jonah is very tricky. Jonah tells Pablo that Papagayo is the tricky one, leaving Pablo behind so the entire gang can ride into town and pay a call on Pablo's mamma, who everyone knows is the biggest tramp in the country.

Pablo, needless to say, gets very angry, pulls a knife, and jumps on top of Jonah. Then, in the third most bizarre thing I have ever seen in a Hex comic, Jonah grabs Pablo's crucifix in his teeth and manages to somehow strangle the holy living crap out of Pablo 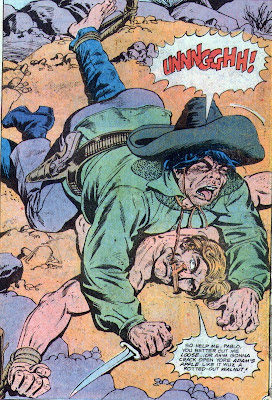 . Pablo cuts one of Jonah's hands free and Jonah punches Pablo off of him. Pablo starts to pull a pistol, but Jonah grabs the dropped knife and throws it right into Pablo's heart.

Jonah manages to free himself, grab his gear and get on his horse to get to Vera Cruz. As he rides off, we see Papagayo watching the entire thing and one of Papagayo's riflemen drawing a bead on Jonah's back.

Statistics for this issue
Men killed by Hex: one, Pablo. Who, as stupid as he was, should have been dead years ago.

Running Total - 141
Jonah's injuries: Bullet grazing his head, gnawed on by ants.
Timeline: This one takes place 8 months after Jonah Hex #2 and seems to be placed in 1876/77 timeframe. This will cause a very big problem later on in the timeline when we are constantly reminded that Jonah vanished in 1875. I wish Fleisher would have learned to take notes & work a calendar.

The high point of the story was Papagayo, a villian that will kill his own men at the drop of a hat. Finding guys to work for you under these conditions must be like recruiting Klingons, each one thinks that they are smart enough to outwit the leader. Pablo and the whole tied-to-the-ant-hill death was just stupid and really wrecked the rest of the story for me. It was like Fleisher needed to make this a two part story but didn't have enough going to actually keep it interesting. And the second half is by far the more superior part of the story.

Next Issue: Gold pistols, Dynamite, the bridge from "Indiana Jones and the Temple of Doom", and more violence than you can shake a gold brick at. + Jose Luis Garcia Lopez

Dwayne, this is one powerfully kinky issue. Nekkid Jonah! Estrellita and her power corset! Strangling a guy with his own crucifix...and as he is splayed on top of you.

Yes, the story was padded...but who cares! And a shirtless Hex, is part of the plot dammit!

I guess Porfirio Diaz appointd himself President of Mexico in 1873in the DC Universe. These kind of things are a pain when you use "real" historical people but not as bad to me as mussed up continuity from title to title with the character himself. Heck, in the latest volume of JH, the issue with Bell had him looking like an old man when he was a much looking man. Heck, he was even younger than Hex. But I guess the older man appearance is what people connect with.