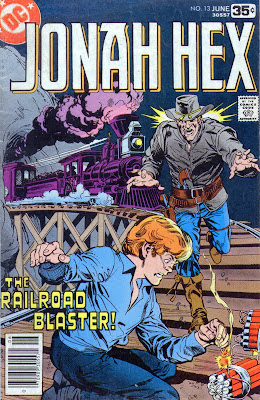 Location: A Union Pacific passenger car near Guthrie, Oklahoma Territory in 1874. Can you count the mistakes in that sentence? Anyway, this is the first story not written by Michael Fleisher in 28 issues.

This story takes place after Jonah gets away from the Louisiana crazies so he is taking a train through the Oklahoma territory in the north central part of the state. We see a hand lighting some dynamite and then we are shown that the dynamite is next to the tracks. The splash page is a huge explosion with the train tossing everyone about. Earl & Virgil, two ruffians, decide to take advantage of the confusion and start robbing folks. They steal a woman's purse and knock a man out before they hear a voice ask if they really want to take the purse because it doesn't go with their outfit at all. Jonah Hex is standing behind them with his hand casually resting up in the overhead storage.

Virgil notes that Jonah's holsters are empty and draws on Jonah. Suddenly the overhead compartment erupts when Jonah squeezes the trigger on the shotgun he had hidden there. Earl gets three shots off but Jonah dives and unloads the second barrel into him. Jonah congratulates himself on his foresight of takes the shotgun from the swamp crazies he tangled with but he is interrupted by the man that was beaten up. The man berates Jonah for endangering them all by discharging firearms in close quarters. Jonah responds by punching him with the woman's purse.

A few hours later, several wagons from nearby Guthrie show up to investigate the explosion. In town Jonah is lamenting that he only has 50 cents to his name. Down the sidewalk comes a small boy running from a shopkeeper. The boy has stolen a small bag of grain and runs into Jonah. The shopkeeper catches the boy, but Jonah intervenes and gives the man a quarter for the grain. The man starts to protest but Jonah quietly says that the quarter will cover it. Jonah sends the boy on his way with an admonition to not let thievin become a habit.

A short while later in the saloon Jonah is about to get a drink when a man by the name of Reuben Gittes offers to share a bottle with him. Jonah takes up the offer and the man says that he has admired the fine way that Jonah handled the purse-snatchers on the train and then calls him by name. Gittes explains that he has a pistol under the table aimed at Jonah and that Gittes work for the Pinkerton Detective Agency.

Gittes explains that he isn't after the bounty on Jonah, he has been sent to Guthrie to investigate a series of explosions that have been plaguing the railroad. He has been offered $5,000 to bring in the saboteur. He knows Jonah reputation for tracking down men and offers Jonah $1,000 to help him. Jonah asks why Gittes doesn't just kill him now & collect the $10,000 on his head. Gittes explains that it would do his health no good to be known as the man who killed Jonah Hex. Jonah agrees to Gittes' terms and starts tracking the saboteur.

For hours he follws a trail that appears to be made by two people with a wagon that has a 'bum wheel'. Eventiually he comes upon a large ranch that has seen better days. As he rides up the owner, Roy Cooper, steps out and threatens Jonah with a rifle. Just then the young boy, Billy, Jonah helped earlier runs out of the house and explains that Jonah paid for the grain. Roy apologizes and explains that there have been robbers in the area and he has to be careful.

Roy continues working on repairing his buckboard wheel and eventually starts bad mouthing the railroads. He catches himself and then invites Jonah for dinner. During dinner, Jonah probes for Roy's opinion of the railroad and Roy starts talking about how the railroad has started taking cattle drives away and a man like him has a hard time making ends meet. After dinner Jonah excuses himself and leaves only to climb a nearby hill so that he can continue to watch the cabin after dark.

Soon, Roy & Billy get in the buckboard and Jonah follows them to a railroad trestle. The tracks come around a huge bend near some rocks and then go across a gorge. Roy's plan is to blow up the rocks and knock them onto the track. Billy asks why they just don't blow up the bridge. Roy explains that the engineer will see the rocks and have time to stop the train. If the trestle was gone folks would die in the crash. 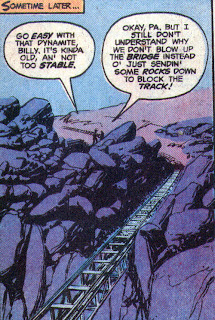 Jonah steps out from the shadows, pistols drawn. Jonah says that he is going to have to take them in but then Gittes steps out behind Jonah. Gittes tosses some ankle-irons to Jonah and tells Jonah to put them on himself so Gittes can collect the $15,000 himself. Gittes laughingly explains that his plan is to kill Jonah for the $10,000 and then kill Roy for the $5,000 but he will explain that Roy killed Jonah first. Before Gittes can pull the trigger, Billy jumps up on a boulder with a stick of dynamite and a match. Billy tells Gittes to drop the pistol.

Gittes decides to drop Billy instead and shoots the boy. Billy falls backwards onto the trestle and the dynamite explodes. Roy lunges at Gittes but is gunned down and when Jonah attempts to tackle Gittes he falls, due to the ankle-irons and Gittes pistol whips him. Gittes is about to shoot Jonah in the head when he is knocked out with a rock by Roy, who dies right afterward.

Sometime later we find Gittes shackled to the railroad track. Jonah is sitting atop his horse next to him. Jonah explains that since the bridge is blown up somebody has to warn the train but since Jonah is going to be busy burying Roy and Billy, Jonah will leave Gittes there. Gittes starts screaming that it is still too dark for the train to see him. Jonah says that's not a problem. the train will stop to find out what the big bump was.

Jonah turns and rides off, leaving Gittes screaming in the dark. 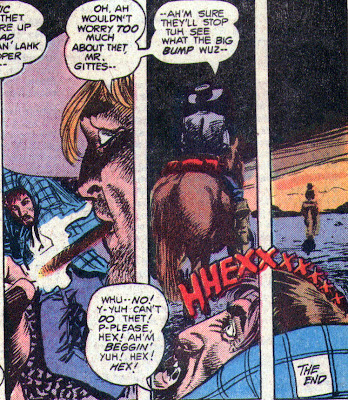 Statistics for this issue
Men killed by Jonah - 3 Running Total - 159
Jonah's injuries - pistol whipped, but not knocked out
Timeline - 1874. But, let's go back to the first sentence.
I think any ranting at this point would be pointless. But, understand that I am ranting on the inside.

Besides all of this, I did enjoy this issue with Gittes pulling a great double-cross and everyone threatening everyone else with dynamites, rock, rifles & pistols. Jonah is kinda helpless through the whole thing but gets the final say in a very gruesome EC kinda way.

Next Issue: More bad geography and Jonah almost gets religion.
Posted by Dwayne "the canoe guy" at 7:26 PM

1874? Wasn't Oklahoma considered Indian Territory at this point? Washita and Sand Creek weren't TOO far in the past at this point.

I haven't read this, and it does sound pretty good. I love how Jonah always dispenses justice with a nasty little twist to it. "Bump" indeed!