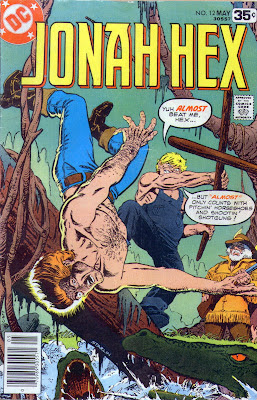 Jonah is in a dugout canoe paddling through a Louisiana bayou looking for his pal Gator Hawes, who went missing 2 months ago. Jonah is thinking about the dangers of being in a dugout and the only problem is being swamped by a gator. Of course, a mind-reading alligator picks that time to slam into Jonah's canoe, knocking him into the bayou. The gator and his buddies, obviously working at the direction of minds stronger than theirs, proceed to tear off Jonah's shirt, but not before Jonah buries a knife into one gator & drives the other off.

Jonah surfaces, gasping for breath and is helped to shore by an old man and his huge hunk of a son. The pair, Josh & 'Pappy', take Jonah to their cabin where they meet the third member of the family, Isabella. Josh explains that Isabella is the homeliest woman in the world and tells her to explain why she doesn't get married. Isabella, looking

at the ground, mumbles that it is because nobody wants her. Josh keeps goading her and Isabella says that she is ugly as a mud fence.

Jonah protests at this verbal abuse and Josh punches Jonah in the stomach and then in the head, knocking him out. Josh takes Jonah and tosses him into a cage along Gator Hawes. Gator is begging for food but Josh tells Gator that Gator has to beat Josh at pole-wrasslin' before he gets to eat. Jonah wakes up and Gator explains that he was kidnapped two months ago and the only way he has stayed alive was by eating rats & toads. Jonah says that they have to find a way out but Gator, pointing a couple of skeletons, explains that the only way out is the way those poor fools got out. 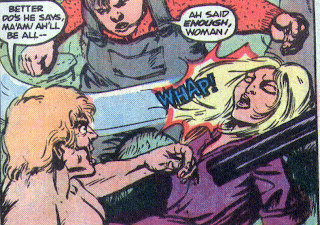 The next day Jonah is let out and taken to a fallen tree across the river. Josh is going to pole-wrassle Jonah. If Jonah wins, he gets food. Pappy is sitting in a dugout with a shotgun in case something goes wrong. Josh just keeps yapping as they start fighting and Jonah stabs Josh in the groin with the end of the pole. He then hits Josh in the throat, knocking him off the tree. Jonah jumps off the tree and starts to take off but Pappy unloads the shotgun and hits Jonah in the head, knocking him out.

Jonah comes to back at the cabin with Isabella tending to his wound. Josh tells her to get away from Jonah and he backhands her, knocking her down. Josh throws Jonah back in the cage and leaves. Sometime later Isabella comes back to the cage and Jonah tells her that she isn't ugly, in fact she is beautiful.

The next day Josh & Pappy let Gator & Jonah both out. They are going to make them pole fight each other and the loser will be fed to the gators. Jonah & Gator are on the tree with Gator being almost too weak to hold the pole. Josh & Pappy are in the dugout, jeering them on. Jonah whispers to Gator to hit him as hard as he can. Gator swings and Jonah falls off the log and into the river. He surfaces under the dugout and knocks Pappy & Josh into the river. Jonah jumps into the dugout, paddles towards the log & tells Gator to jump in.

Gator jumps, falling & hitting his head and this leaves Jonah on his own to try to get out of the bayou on his own. Eventually they come to a fork in the river and Jonah picks the left side but shortly the current is getting faster & faster because.... you guessed it, there is a 50 foot

waterfall smack in the middle of the bayou. Jonah yells at Gator to wake up and he grabs Gator and jumps for an overhanging tree. Jonah tells Gator to hang on, but Gator is too weak from lack of food and drops into the river, being swept over the falls.

Jonah climbs down the tree and is greeted by Pappy & Josh standing over him with the shotgun. Josh beats Jonah up and they throw him back into the cage. They starve Jonah for several days until one stormy night Isabella shows up asking Jonah if he really meant that she was beautiful. She asks if she lets Jonah out, will he marry her. Jonah agrees to the wedding and just as Isabella opens the cage, Pappy shows up and shoots Isabella. Jonah throws open the cage door, knocking Pappy backwards and knocking him out.

Jonah grabs the shotgun and find that Pappy isn't carrying any shells. In the cabin, Josh is tending his collection of poisonous snakes. Jonah kicks in the cabin door, boots Josh in the groin and punches him in the gut. Pappy shots for Jonah to stop and there is Pappy standing in the doorway with the shotgun, explaining that he grabbed some spare shells from the dugout. Jonah dives forward, tackling Pappy around the ankles. The shotgun goes off as Pappy falls forward. All of the jars of poisonous snakes are shattered and they attack Josh.

Jonah dives out the cabin window to find that the storm has caused the river to flood. He climbs up on the roof and finds that Pappy has followed him. The waters keep rising and just as Pappy is ready to shoot Jonah the river causes the cabin to lurch and the weather vane on the roof stabs Pappy through the heart. Jonah spends all night on the roof in the storm. The next morning he locates the dugout and heads home.

Statistics for this issue
Men killed by Jonah - Josh

Running Total - 156
Jonah's Injuries - Bit by a gator, shot in the head, beat up & knocked out twice.
Timeline - There is no evidence that this issue follows the previous one, but next issue contains a reference to this one, so Jonah is still on the run here putting this in 1876 or 1877.

Alcazar's artwork is terribly dark and muddy, which should work in a story about a swamp, but I just don't care for it. The fact that a bayou, a low lying body of water would have a 50 foot waterfall just killed most of this story for me. Josh & Pappy are both wonderfully murderous and evil and they both get what they deserve. The story doesn't really advance Jonah at all, so this story is just so-so. 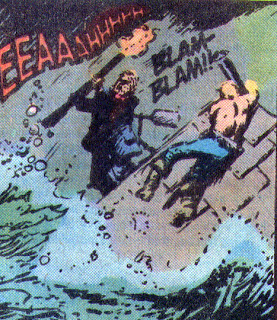 Next Issue: - Jonah spends time in Oklahoma Territory, a lot of stuff gets blown up, and most amazing, Fleisher doesn't write it!!!

Hmmm...I don't think that I've come across this, but like you, I find the idea of a 50' waterfall in a swamp to be a tad on the fanciful side.

Is EVERYONE who lives in a swamp evil? Seems to be that way. Jonah is much better off on firm ground.

My only question was where did the storm come from? There was no mention of a storm (nor did I see rain in the art) anywhere in the story. Did I miss it?

It was easy to miss but I did write:
"They starve Jonah for several days until one stormy night Isabella shows up asking Jonah if he really meant that she was beautiful"

In the story it's not real evident that there is a storm, you can tell because Isabella is wearing a poncho.

In the book itself, I didn't see anywhere that said it was raining until the house was floating away. Nor did any of the art show wet hair or water of any kind. I also though Isabella was wearing something to cover her head b/c of being ashamed of how she looks. Also, I wish there would have been some tie in this story with the characters in JH V2 # 10. Oh, well.

The 'rain' was actually small diagonal streaky lines. It looked like a drizzle.

Yeah, it would have been cool for the tie-in with #10 but I think Gray & P were trying to get new readers with a 'done in one' approach. They have done some multi-part stories and they have given a nod or two to the original series (I'm glad they haven't made any reference to the Vertigo series.)