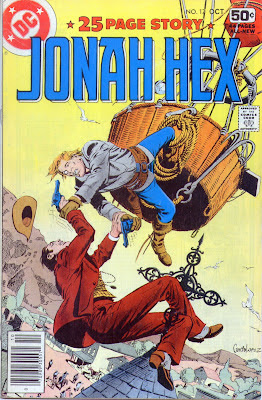 Jonah Hex #17 Oct 1978
"Voyage to Oblivion"
Michael Fleisher, story - Vincente Alcazar, art - Jose Luis Garcia Lopez, cover
The DC EXPLOSION continues!! Charleston, South Carolina, on the edge of the ocean. Jonah is standing near the beach next to a hot air balloon speaking with the owner of the balloon. The man has contacted Jonah in order to have Jonah pilot the balloon across the Atlantic to Europe for a reward of $5,000. $5,000 sounds like a lot of money, but since Jonah normally rakes in $10,000 or more whenever he guns down a few guys, this is chicken feed. Jonah turns down the offer and turns away to mount his horse.
The scientist starts pleading with Jonah, but in the end smashes a large wrench across the back of Jonah's head, knocking him out. The scientist, noting that the prevailing winds won't be to his advantage for another 6 months, loads Jonah into the basket. He also notes that someone has to stay behind to make improvements in case the flight fails. He casts away the lines holding the balloon and as it starts to lift off, Jonah awakens. Jonah stands up and looks over the edge of the basket. Realizing what is happeneing, Jonah reaches down and grabs the man by the coat lapels.
The balloon continues to rise and the scientist is begging to be released. Jonah says that his plans are to haul the man aboard so that HE can pilot the balloon. Jonah starts pulling the man in as the balloon is already up to a dizzying height. Suddenly the man's coat lapels rip off and the scientist plummets to his death. Looking at the cloth still clenched in his fist, Jonah says that when he gets back to Charleston that he should write a letter to that man's tailor. 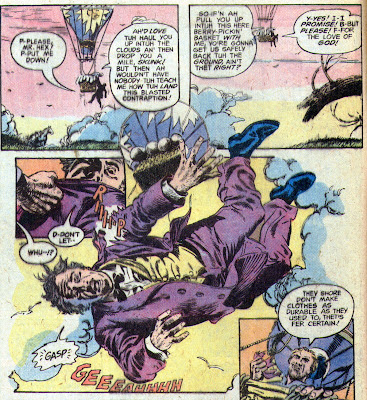 Sadly, the scientist's calculations were of the same quality as the cloth in his suit. For three days & nights, the balloon take a southernly track through the Carribbean and on down so that it is just east of Brazil. By this time Jonah has figured out how to lower the balloon by pulling a release cord, but this has done him no good since he has been over the ocean the entire time. He has found a telescope in the basket and he sees a large ship out on the ocean.
Of course, the ship has a telescope as well and they have spotted Jonah's balloon. Knowing that similar balloons were used for reconnaissance during the Civil War, assume that they are being spied on. As the ship draws closer to moving under Jonah's balloon, two crewmen are called up to the deck and ordered to shoot the balloon. Needless to say, this isn't in Jonah's plans and he ends up taking a quick dunk in the drink.
Once on board, the captain demands to know why Jonah was spying and what he knows about the cargo. Jonah sticks to the truth, that he was tossed into the balloon & that the entire trip is an accident. The captian doesn't believe Jonah and orders him strapped to the mast and flogged. Jonah responds in typical Hex fashion, he beats the living tar out of the crew, handing out a few testicle realignments with his boot.

But he is finally overwhelmed, knocked out, strapped to the mast and flogged forty times. He does pass out from the pain.
Before the crew can unstrap Jonah, the navigator comes running up to the captain, talking about a course correction that he has made. The captain is livid, stating that this new course will take them right past the Isle of Palms. The captain handily (hee hee, handily, Isle of Palms, hee hee) slaps down the navigator, explaining that the Isle of Palms is a haven for cannibals. The captain orders that Jonah be shackeled and thrown down with the cargo.
When Jonah finally come to, he finds that he is on a ship full of African slaves headed for South America! Jonah is chained up along with the slaves but quickly is addressed by Mbwasi, the king of the Mwasbwe tribe that has been enslaved. The king knows a little English, enough for buying & selling with English traders (so he says). Mbwasi also introduces Cricket, the black cabin boy who has also been cast down into the ship's hold for displeasing the captain. Jonah wastes no time in escaping by pulling his knife from his boot and manages to pick the locks on everyone's handcuffs.

Mbwasi has his warriors gather together the spears that they have been able to create by pounding iron barrel stays into points. The spear shafts are made from wood that they have pulled from the hull of the ship. To insure victory, Mbwasi has rubbed a magic amulet against all of the spears. Jonah notices that the amulet is made of flint and quickly hatches a plan.

Later that night, during a huge storm, Jonah uses the flint to start a fire using a bunch of straw in the cargo area. When one of the sailors goes down into the hold to put out the fire, Jonah throttles him with a length of chain. The next sailor down the stairs ends up with a spear his chest. Cricket says that he knows where some guns are kept and he will fetch them. Jonah asks Mbwasi if Cricket is trustworthy but the king is not sure. 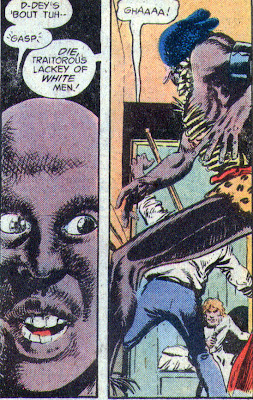 ...the king makes sure that Cricket will never betray them again. The captain quickly responds and shoots the king dead. Jonah takes the rest of the warriors and rushes the crew.

Through the night the fight rages on with Jonah and the warriors taking control of the wheelhouse. the captain shouts through the storm that Jonah jas them outnumbered, but unless they release control of the wheelhouse, everyone will die in the storm. Jonah puts on a slicker and climbs along the side of the ship until he is behind the captain and his men. Jonah manages to kidnap the navigator and bring him back to the wheelhouse. Jonah then heads out to get some lifeboats ready, just in case.

He encounters the captain whose pistol is drawn to kill Jonah. Hex swiftly swings the lifeboat, knocking the captain overboard into the raging seas. Jonah heads back to the wheelhouse to learn that the warriors have killed the navigator and now they are heads for a reef.

Jonah does his best to steer away from the rocks, but the boat breaks apart, throwing everyone into the water. Jonah and some of the slaves manage to crawl on some wreakage and last through the rest of the storm. The next day they are rescued by natives in canoes but the natives are all sporting blue faces, indicating that they are the cannibals that the captain was worried about. Jonah and the slaves are all pulled aboard and taken to the closest island.

Once on land, Jonah is held captive, but the slaves intervene, attempting to communicate with the cannibals. Through some rough sign language, the slaves tell that Jonah was the one that saved them. The cannibals load a canoe up with supplies and indicate that Jonah is free to go. Jonah tries to tell the slaves that the cannibals are going to kill them and eat them but he fails. Finally, realizing that his skin is still in danger, he takes the canoe and paddles away.

Statistics for this issue
Men killed by Jonah - Hmmm, I'll have to go with two. Unintentionally dropping the scientist counts and then throttling the sailor with the chain.
Running Total - 169
Jonah's Injuries - Knocked out and whipped forty times. That is sure to leave a mark (& the scars show up in Jonah Hex Vol 2 #2)
Timeline: There is no guarantee that this takes place after the whizbang of a trial last issue. Until I see evidence to the contrary I reserve judgement of placing this in the timeline.
Again, 25 pages to fill up but Fleisher does a pretty good job. I loved the idea of Jonah being adrift and then ending up at sea. Also, Jonah is thrown into a situation rubbing his face in slavery that he at one time fought to keep (but he did leave the Confederacy to his credit on this issue). I didn't care for Mbwasi picking up 'some' English and then shouting "Die, lackey dog of the white man." I don't know, but I think 'lackey' just doesn't come up in friendly trade agreements. I'm not sure that it even comes up in unfriendly trade agreements. Playing Settlers of Catan I usually use the word Bastard or Unrepentant Heretic during an unfriendly trade.

The 'escape' from the cannibals seemed a little rushed, ironic since we had 25 pages to work with. At the end of this issue I was actually wincing, because I just knew in my heart of hearts that next issue Jonah would be in Wyoming, without a word being said about this side-trip.
Boy, was I wrong..
Next Issue: Pig-eating snakes, a hidden Brazilian treasure, quicksand, pits with sticks, and a rubber tree plant....ation.
Also next week: I'll take a look at Jonah's first appearance in Justice League of America. Bring your air-sickness bags and shield your children's eyes. It won't be pretty.

Well, pierce my ears, and call me drafty, but I haven't come across this particular book. It sounds great! Certainly a little different from the usual...although with Jonah, is ANYthing usual?

This was my first Jonah Hex comic that I ever bought and read. I loved the idea of getting Jonah out of his natural environment in this and the next issue. Too bad it couldn't have lasted longer.

I really enjoyed this book a lot. It was such a departure from his regular adventures and we wouldn't see a story along these lines until Jonah went to China.