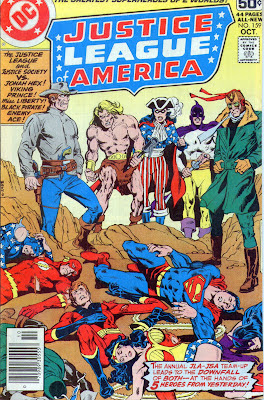 Oh lord, where do I start? I wanted to love the JLA during this time and I suffered through the Dick Dillin art. I never ever enjoyed anything that this man drew but this was the annual JLA/JSA team-up, so I had to buy it.

Also, Jonah Hex was on the cover. I slammed down my 50 cents and dove into the book. Then I threw up in my mouth...a lot. But I shouldn't attempt to sway the jury on this one.

The JLA & JSA are meeting in Club 22 on Earth-1. There is a lot of partying and emoting, some of which I will describe here: Then we break to 3786 in another dimension. The Lord of Time is talking to his huge living computer. The computer is telling the LoT that it has successfully nabbed 5 people from the past and dropped them in July 15, 1978. LoT rattles on about being able to use the computer to build this refuge outside the time-stream where he could work his horrible plans. Plans that include learning how to stop time itself. Of course, LoT orders the computer to stop time and then realizes that he can't recind the order or tell the computer to put thinsg back. The stoppage of time will result in.... something too horrible for the LoT to even think about.

LoT then devised a plan of snatching 5 heroes from the past, give them super-powers and have them attack the JLA/JSA.

We return to 1978 to see a tri-plane, two flying horses and a flying viking ship cause the building to collapse onto the JLA/JSA and defeat them. Then we are introduced to Viking Prince, Jonah Hex, Enemy Ace, Miss Liberty, & The Black Pirate. They all recount how they we abducted from their own times, brought together and then ordered to fight our heroes. They also talk about how they can understand each other but they also heard a voice that gave them orders, but none of them can remember what the voice said. The five heroes do a minor freak out and Miss Liberty suggests they go to a place she knows where they can figure this out.

Moments later, Superman busts out from under the rubble of the collapsed restaurant. He helps uncover several of the other heroes. Oddly some of them seem to suffer from some kind of Conway-Coma. Wonder Woman of Earth-1, Black Canary, Green Arrow, & Hawkwoman are all taken to a nearby hospital, while th eremaining heroes follow a chronal energy trail that Superman has detected.

Flash, Huntress, Dr. Mid-Nite, Elongated Man & Wonder Woman (Earth-2) pile into Wonder Woman's invisi-jet while Hawkman, Superman and the Star-Spangled Kid fly alongside. They end up at Valley Forge and end up getting attacked by Viking Prince and the Black Pirate riding a flying Viking Boat. Viking Prince manages to lay the smackdown on Flash and Black Pirate cuts down Wonder Woman and Elongated Man. Superman, Hawkman & SSK end up on the losing end of Jonah Hex, Enemy Ace & Miss Liberty. The Huntress and Dr. Mid-Nite don't fare well either.

At the end, all of our heroes are unconscious and the five from the past are sent to 3786. The five are placed on a statis-shelf outside the LoT castle and everything fits into the LoT's plan. LoT knows that when the JLA/JSA suffers a beatdown, they rally and come back stronger than ever. He is banking on them being able to defeat his computer because in five hours the computer will stop all of time and it will never get started again.

Statistics for this issue:
Men killed by Jonah: It's a JLA book!!! zero
Jonah's Injuries: None, he's a guest star
Timeline: Who really cares?

This story stinks, but you want to know about Jonah, don't you? Here is all of Jonah's dialogue: 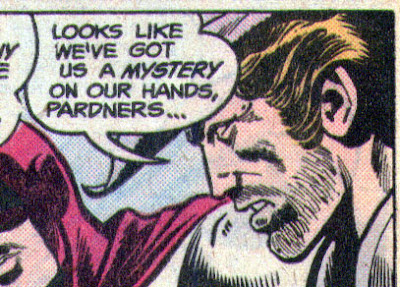 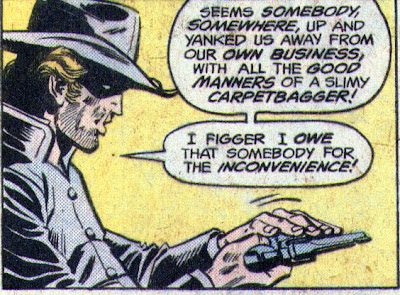 Yup, that makes me want to rush out & start reading Jonah Hex.

Next Issue: Believe it of not, it gets worse. Yup, they bring in a toad-frog from Hell.
Posted by Dwayne "the canoe guy" at 11:56 AM

Oh. My. God. The absurdities of this book are just mind-boggling aren't they? I haven't read it, and now I don't have to!

I mean, I love Jonah and all, but against Batman or Superman? He's toast. They're ALL toast. What were these guys smoking?

I have to go in a corner and bang my head against the wall for a while.

But wait, they made Jonah's horse fly and his gun shot lasers. I'll post some pics of the flying/laser goodness.

THEN you'll understand how this is actually better than the Lightning Saga.

Yes, but so can most of the Justice League, so this shouldn't be that big of a deal. All Superman has to do, is fly up and punch his horse, a la' Blazing Saddles, and there you are!

The writers weren't just smoking something, they were smoking, snorting AND injecting!