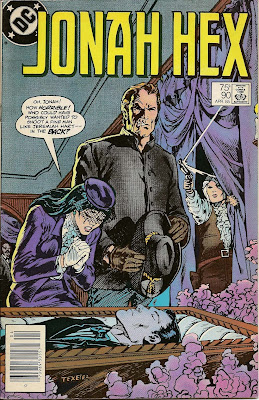 Jonah Hex has had enough of Mrs. Crowley's boarding house and is saddling up his horse when Mrs. Crowley tries to stop him. Hex states that no matter what the doc has said, he needs to help a friend and he rides off.

Meanwhile, many miles away, J.D. Hart is hanging out with some kids. The kids toss coins in the air and the Marshall shoots all of them before they hit the ground. Just then a silver haired young woman rides up and introduces herself as Silver Ames. She states that last month in Abilene she gunned down Kingfish Belden, the third fastest gun in the west. She tells Hart that folks say he's the second fastest and she's going to kill him. Hart waves her off and turns to leave, but Silver draws anyway and pumps three slugs into Hat's back, right in front of the kids. As Hart lays there dying, Silver jumps on her horse & rides off. 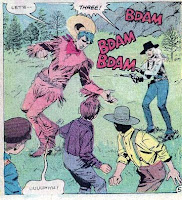 Several hours later Jonah is riding in the mountains trying to decide how to pick up Emmy Lou's trail when there is a sudden avalanche. As he & his horse start sliding among the falling rock, Jonah unleashes a lasso and misses snagging an outcropped rock. He and his horse fall to the bottom of the cliff and are knocked out.

Much later that night, Mei Ling is called into the office of the local undertaker to identify the body of J.D. Hart. She starts crying that men & their guns have destroyed her life but the sheriff tells her that is a woman that killed Hart. 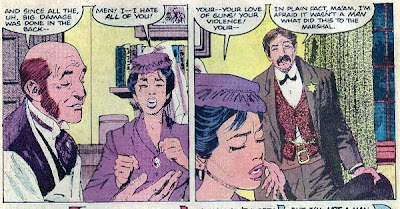 Speaking of that murderous female, we find Silver Ames camped out, having a handy flashback. She remembers her father, a sheep herder, telling her that a man needs to learn to use a gun. Just then a bunch of cattle ranchers ride up and gun down her father. Silver makes a vow that she would become the deadliest gun in the west and starts practicing with her father's pistols. When she is grown she tracks down her father's killers and avenges her father, but she doesn't stop there, slowly working her way across the west.

Back at Jonah, he finally wakes up to a pouring storm. He pulls himself to his feet and walks off in search of shelter. He finally finds a cave, thinking that he will more than likely stumble upon a sleeping grizzly, but, surprisingly, Jonah isn't attacked by a bear...

Meanwhile, at the hideout of Brett and his gang, Brett finds that Emmy is sulking about having shot Jonah. Brett goes into her room to 'cheer' her up but Emmy jams a chair under the doorknob, locking the other two women out of the room. Emmy pulls a knife on Brett and slashes him across the face. A fight ensues and Emmy throws an oil lamp to the floor catching the cabin on fire. She throws a chair through the window and manages to escape on horseback. 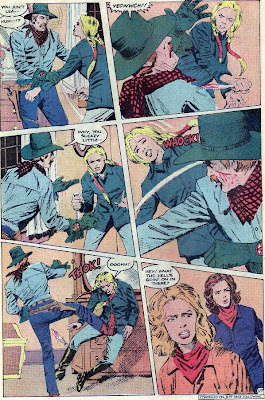 Meanwhile, Jonah has managed to drag his busted clawed up self to a cabin. He is bloody and drenched to the bone and asks for a horse. The old man in the cabin lets him take a horse and stands in the barn door waving goodbye when there is a sudden flash of light from the sky. A bolt of light flashes past Jonah and strikes the barn, causing the old man to disappear. Jonah figures that he went back in the barn & rides off. 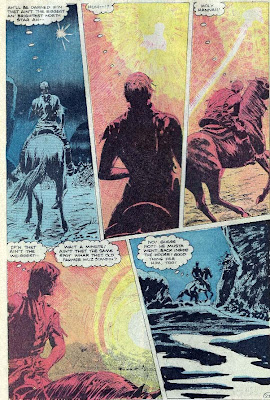 The next morning, Jonah is back in down in the doc's office. The doc patches him up and asks if Jonah has considered hiring a doc to follow him around full time. The doc then hands over a telegram that came to the sheriff's office yesterday. Jonah takes the telegram and leaves the office. Standing on the sidewalk, Jonah reads that J.D. Hart has been gunned down and just them Silver Ames shows up.

She tells Hex that she killed Hart and she will kill Hex as well. Jonah says that she may be the fastest girl, but she won't outgun him. Her gun is slung too low, she hasn't filed off the front gun sight, her stance is way too broad. Silver tells Hex to shut up and draw on three..

THRE.. and Hex shoots her dead on the spot and walks off. 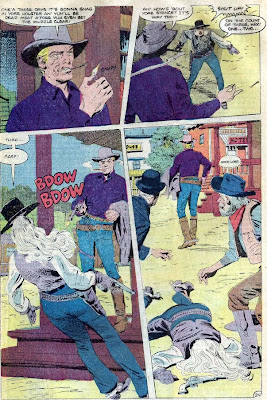 Statistics for this Issue
Men killed by Jonah - 1 (technically a woman, but it counts)
Running Total - 423
Jonah's Injuries - still recovering from Emmy shooting him , Hex survives an avalanche and being mauled by a cougar
Timeline - I don't know how long has passed from last issue and this one, Let's toss out a few days and this issue covers two days. I would say that we are at the end of July 1878.

I'm somewhat conflicted about this one. Let's take both sides:
PRO:
CON:
We did get a small teaser in the letter column last issue showing Jonah Hex on a motorcycle and Crisis on Infinite Earth was gearing up. It was at this time I was thinking that the new direction for Jonah would be tied into CoIE but even though he did make an appearance, the weirdness in the final three issues of Jonah Hex, weren't tied into it at all.

Next Issue: The circus comes to town, more of the weird ray, and a Neal Adams cover.
Posted by Dwayne "the canoe guy" at 11:15 AM

So, who has more scars -- Jonah or Batman? Jonah, obviously, has the BIG one, but I'm talkin' overall count here ...

Well...THAT was interesting! How exactly can you count yourself as the fastest gun in the west...man OR woman, when you gun down a guy from BEHIND? That was a totally rotten move, and I'm glad...GLAD that Jonah blew her up. Er...down. Whatever.

The art work in this issue is a downer. I remember well that we all knew Jonah Hex was winding down in favor the upcoming" Mad Max goes Lynerd Skynerd" Hex. It seemed a poor send off. The last couple issues of that JH run were shoddy and looked rushed, like they couldn't wait to get to the silver space suits with the diagonal zippers.

From what little info I've been able to glean over the last few years, JH#89-92 were quite likely supposed to be something else entirely. According to DC, the stuff with "the mystery ray" IS related to Crisis (right down to DC claming that the old man who disappears in this book is the Monitor!), and Mark Texiera has said that he drew a story that involved Jonah wandering through a snowstorm, half-frozen and starving, and eventually stumbling into a strange white light (similar in description to a Crisis wave). What I can't puzzle out is what happened for this story to be junked in favor of "mystery rays" and eternally-dangling plot threads.

On a related note, I've seen a copy of a memo from Bob Greenberger to Paul Levitz (included in the DC Vault book) asking where exactly to place Jonah's future in post-Crisis continuity, and there is brief reference to Reinhold Bornsten in a Booster Gold book of the time, so despite the sweeping-under-the-rug treatment the Hex series has gotten in later years, there WAS a time when DC actually cared enough to try and make it all fit.