Jonah Hex #91 "Sweetheart of the Rodeo" 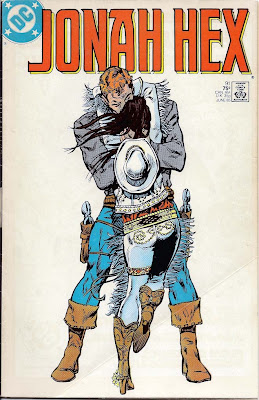 Jonah is riding across the west searching for clues to the location of Emmy Lou. He comes across a lovely woman trick riding but her horse is suddenly spooked by a rattler and she is thrown, however her foot is caught in a stirrup. As she is being dragged, Jonah overtakes her horse, jumps upon it and brings it to a stop. He helps her to her feet and much later fixes her dinner around the campfire.

Jonah learns that the young woman's name is Carolee and she is 21 but Jonah thinks she is closer to 18 and that she has run away from home. Carolee says that she ran away from home because she wants to be a trick rider in Rory Starbuck's Wild West Show. Hex asks if that is show opening up in a couple days at a nearby farm. Carolee mentions that it is.

Jonah says that he has a friend that is working as a stock handler and maybe they can her an audition. Carolee is very grateful and starts showering Jonah with kisses. He tells her to hold off, he's old enough to be her father and she responds... 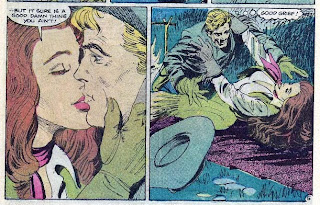 The next afternoon Jonah's friend gives Carolee an audition and the owner of the show hires her on the spot. As Jonah & Carolee are heading to the barn to get their horses & head into town, they discover that the barn is on fire. Jonah tells Carolee to run & get help. Jonah starts to toss sand onto the fire but he notices someone sneaking up on him. He turns in time to use the sand bucket to deflect a bullet and then hits his attacker with the bucket and then punches the man's lights out.

Before the rest of the Wild West show can arrive, someone hits Jonah in the back of the head and drags his attacker off. Jonah is rescued from the barn and the show folks save the barn.

That night, Jonah is recovering from his attack & is talking with Rory Starbuck. Starbuck says that the men responsible had worked for him, but were discovered stealing livestock. The men went to prison but are now out and aim to settle the score. Starbuck hires Jonah Hex to keep the men from succeeding.

Meanwhile, Emmy is leading her horse through the darkness, trying to escape from Brett. She stops at a stream to get a drink and when she starts to stand back up she sees Brett on the other side. She grabs a handful of gravel and slams it into Brett's eyes. Before Brett can recover, she grabs a rock and smashes it across the side of his face. Jumping on her horse, Emmy rides off as Brett fires a couple of shots after her.

Back in town with Jonah & Carolee in their hotel room, Jonah is regretting having gotten involved with Carolee. He mentions that she is just 17 and he is more than twice that. Carolee doesn't mind and she grabs Jonah in her arms, the scene fades to black.

The next morning, Jonah is trying to pick up some sort of trail on the guys that burnt the barn. As he is riding along, one of the jaspars takes a shot at him & Jonah topples from his horse. Then said jaspar walks up, Jonah sits up unharmed and shoots jaspar dead. However, the dead jaspar has some friends up in teh rocks and they open fire on Hex.Jonah moves to some rocks and returns fire as a strange ray falls from the sky, hits the dead jaspar, causing him to vanish.

Jonah is able to chase off the other two men but when he turns around, the dead man is gone! 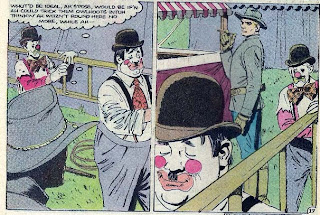 Several hours later at the Wild West Show, Carolee is working on her act. Jonah realizes that the men terrorizing the show won't show up again as long as he is around. A couple of rodeo clowns walk by and Jonah hatches a plan. Starbuck is talking to Carolee about how she is going to be a big star and that she will soon be their #1 attraction!

Meanwhile, Emmy realizes that she is going to need a fresh horse and as she dismounts to walk the horse for awhile, she suddenly falls into a covered pit.

That evening we find Jonah Hex in clown makeup watching the crowd, looking for the thugs threatening the show. He also notices Carolee and Starbuck doing some heavy duty lip locks behind the scenes. Jonah starts to put an end to it but another rodeo clown grabs Jonah and pushes him into the arena in order to distract the bulls from the bullriders. Jonah ends up diving into a barrel and having a bull knock him around the arena for awhile.

The two leftover thugs show up and draw on Starbuck & Carolee. They herd both of them towards the payroll wagon but Jonah jumps out of the barrel, scales the fence around the arena, grabs a rope and swings to the rescue. Thus the two thugs are beat to a pulp by the most bad-ass clown that ever lived! 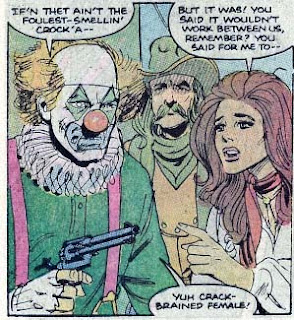 Jonah then demands to know why Carolee was spit-swapping with Starbuck. Carolee says that it was Jonah's idea. Jonah had said it wouldn't work between them & she should find a younger man. Jonah stomps off to remove his clown makeup and ends up busting the mirror in the makeup tent in frustration.

Meanwhile, Emmy Lou can find no way out of the pit she has fallen into.


Statistics for the Issue
Men killed by Jonah - 1
Running Total - 424
Jonah's Injuries - none
Timeline - This issue seems to pick up where the last one ended. It covers two days. Let's say it is the very end of July 1878.

Again, I don't care for Morrow's work on this one. Everything seems so murky and wooden. The story is not a great one either. Jonah falls for Carolee way too quickly and gets burnt by her just as fast (of course, she is only 17!) Not much develops with Emmy Lou and we get nothing of Mei Ling and we will never see Adrian Sterling again. I also disliked the Laurel & Hardy clown joke. Kinda cute, but outta place in a western book. For me the best part was the cover.

Next Issue: Emmy Lou & Brett's final confrontation, Jonah gets involved with an even younger woman, and that mysterious ray appears once again.
Posted by Dwayne "the canoe guy" at 6:00 AM

That was a great Superman cover, too.

Which issue were they paying homage to? Or ripping off?