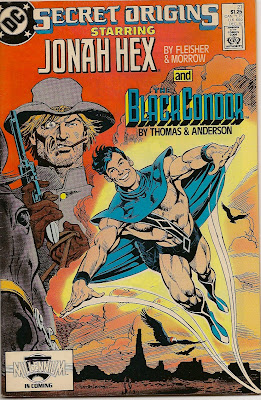 Usually the newer character was involved in a new book, so it is somewhat odd that Jonah Hex, just canceled that year, lands a spot in Secret Origins. I picked it up because I'm a fan. I already knew about Jonah's Secret Origin. Heck, I even knew about his OTHER Secret Origin. So what was I going to learn in this story? Well, a little something, so hang on.

We start off in the Frontier City Amusement Park in Laramie, Wyoming. There is a Frontier City Amusement Park in Oklahoma City, but I get that wasn't Wild Westy enough, but I'll cover that a little bit more in a later post. Anyway, we see a scantily clad young woman running through the park at night being chased by two gun-wielding thugs. She shouts for help, rounds a corner and the heel of her shoe breaks off, throwing her into a nearby cowboy statue. We hear a director shout "CUT!" and we realize that we are witness to the making of a low budget movie. As they set up for the scene it is discovered that the statue that was knocked over was not a statue, but a stuffed corpse.

An unknown time later, at Princeton University a Prof Lawrence is talking with a Mr. Kastner over the phone. Lawrence states that, according to the description and the photos Kastner sent, the corpse must be that of Jonah Hex. Kastner explains that the statue was purchased with a lot of other stuff when West World Amusement Park in NY went out of business. Lawrence asks if Kastner has plans to display the corpse but Kastner explains there is a fly in the ointment.

Frontier City had the corpse repaired and Kastner (we assume he with a museum) want to buy it, but there is an old Cheyenne woman who has an injunction on the sale. She states she is Jonah's common law wife and wants the body for a Cheyenne burial. Lawrence is on a plain to Wyoming asap.

Meanwhile, in Lombard, Illinois, we meet a Mr. Lewellyn, a collector of American Frontier Memorabilia. He is showing two of his thugs around his collection. He has Wyatt Earp's Buntline,, the poker hand held by Wild Bill Hickok when he was shot, the tomahawk of Scalphunter, the table from the saloon where Jonah was shot, Hex's glasses, George Barrow's shotgun, even Mei Ling's wedding dress. BUT he is wanting the stuffed corpse of Jonah Hex. He even has a glass case ready for it and he tells his thugs to do anything in order to obtain it.

At the Gray Eagle Indian Reservation in Wyoming, Lawrence pulls up in a Land Rover in front of a bunch of tipis. He thinks that he never imagined that Tall Bird would still be alive, let alone survive the fire set by Lew Farnham. He enters a tipi and meets Tall Bird. As he pushes the elderly Tall Bird around in a wheelchair, Lawrence states that she has answered every question he has poses, so there is no doubt as to her identity, but Lawrence asks another question: What happened to Jonah in the town of Red Dog in 1875 when he literally vanished from sight?

Tall Bird states that Jonah did speak of it once, "that he had been vouchsafed a visit to a strange new world" and they would never speak of it again. Lawrence asks about Jonah's son, Jason. Her answer? "He told me about Jason. But his is a tale so fraught with horror that I have vowed to carry it within me, in secret, to the end of my days." 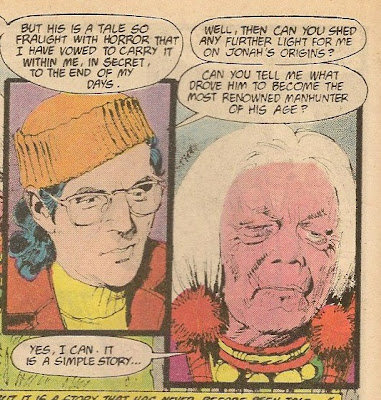 The Prof then asks what drove Jonah to be a bounty hunter. The story Tall Bird relates:

The drunken Woodson Hex gives Jonah a rifle for his birthday, something very uncharacteristic of the abusive bastard. Jonah is probably, oh, TEN? (well, we don't know, but it IS before his mother leaves.) We see a joyous Jonah running around the farm shooting bottles, sticks, scarecrows and the like. That night, Ginny comes home from a day in town. The buckboard broke down and she had to get it fixed. Woodson accuses her of hanky panky and starts slapping her around. He breaks a bottle and threatens her with it.

Young Jonah awakens to the disturbance, grabs the rifle and confronts his father only to get the crap slapped out of him and knocked to the ground.

Tall Bird stops there and says that she will finish the story in the place where they found Jonah, the amusement park. Lawrence takes her back home and heads for his hotel. When he steps into his room, he is attacked by Lewellyn's thugs and told to have Tall Bird sign over the corpse to them.

The next day at Frontier City, Tall Bird retells Hex #7 and #8 in three quick panels and Jonah fell into drunkeness and loose women. One night as he was staggering down the street, he sees a large man beating a young woman. Jonah hallucinates, thinking that it is his father and he draws on the man and shoots him dead. The sheriff shows up and states that Jonah just killed Lucas McGill, a wanted murderer and hands the sizeable reward over to Jonah. Jonah looks at it in a puzzled way, drops it to the ground and rides off.

Back in Frontier City, Lewellyn and his thugs step forward and demand that Tall Bird sign the papers. She, sitting in the shadow of her dead husband, refuses. Lewellyn pulls a gun and states that he will have his way no matter what. Suddenly a shot rings out and Lewellyn drops to the ground. Lawrence grabs the dropped pistol and demands that the thugs drop their weapons. 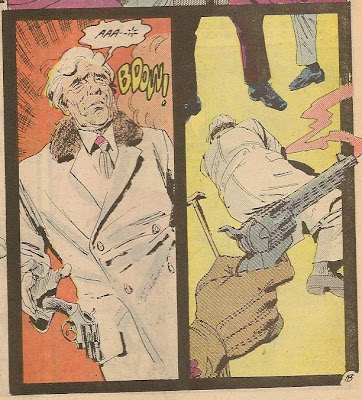 Later, we see the police carting off the thugs and the body of Lewellyn. Lawrence and Tall Bird have to go to the police station to give their statements but as they leave, Lawrence turns to Jonah Hex and says that by tomorrow, they will have Jonah out of there. The police drive off, leaving the stuffed corpse of the greatest bounty hunter standing alone.


Statistics for the Issue
Men Killed by Jonah Hex - Well, McGill and dare I say, Lewellyn? There was nobody else to shoot him. So how about two?
Running Total - 485 (430 past, 55 future)
Jonah's Injuries - none
Timeline - Supposedly this takes place in 1987 and probably spans about a week.

This really isn't a SECRET origin. We only get five pages of info on Jonah's past that we didn't have before and only two of those as an adult. Pretty lame stuff all around. We do get to see Tall Bird, a verification that the HEX series is considered canon, a hint at the horrible end of Jason (not yet seen), but we never see what happens to Jonah's corpse. That is left hanging there, begging for answers.

If Tall Bird gets custody and burns the corpse, how can Jonah see it in the future? If it ends up in a museum, how can it be 'collected' with amusement park junk in the future so Jonah can see it? This issue raises many more questions than it answers and at times I think it would be better if it hadn't been written. The artwork by Gray Morrow, once again too full of Ziptone, too murky, too stiff, too 1950's, too YAWN!!!

Next post, will tie up this story and the Death of a Bounty Hunter into a nice little package. I have mentioned this item before, but it is worth repeating. After that, we'll visit some more of the guest appearances of Jonah Hex and then we dive headlong into the world of VERTIGO. (Don't say I never did anything for you guys, okay?!?!?)
Posted by Dwayne "the canoe guy" at 6:00 AM

I remember this book very well, I remember that I was happy enough to see JH on a horse again that I could over look the Morrow art. It made me go back and read the Jonah Hex Spectacular, which remains my favorite JH story of all time.

I also remember it because, (no disrespect to my gay friends, who would agree I am sure), that "Black Condor" is about the gayest super hero ever. It was a strange pairing.

Is it REALLY a good idea to leave a loaded pistol with a hair trigger in the hand of a stuffed corpse? I seem to remember that dead Jonah shot another guy as well.

I do love that cover however. Jonah looks SO horrified at that half-nekked yahoo flying all over the place.

Yep, dead Jonah has a body count of 2 owlhoots...and that's just the ones we know of!