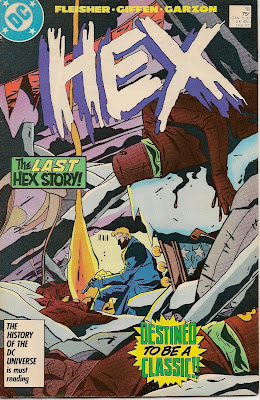 An undisclosed amount of time after last issue, we find Jonah Hex and Stiletta on their motorcycle, plowing across a snow-covered countryside. Stiletta mentions that Mookie and Vance are cooking up a good Thanksgiving dinner, so she hopes Jonah is hungry. Jonah think it's odd that she can find anything to be thankful for in the sinkhole that the future is.

Just then a shot rings out, knocking Jonah off the bike and throwing Stiletta into a snowbank as the bike crashes. It appears that there are some structures around and Jonah takes cover behind one of them. Stiletta makes her way to Jonah's side, dodging the ongoing gunfire as she does.  She looks at Jonah's injury (we don't because Keith Giffen obviously hadn't drawn his way out of the wet paper bag yet to be able to show us anything understandable) and Jonah states that there is no way he can ride the bike to safety.  He tells Stiletta that she will have to go get help and reluctantly she takes off on foot.

Jonah starts looking for a place to hide and smashes in a basement window and crawls down inside the basement. We then see that there are three gunmen who are looking for Hex. They find blood drops in the snow and follow them to the broken window. They crawl down into the darkness and then they notice the smell...and the fuel hose coming in from the window. As the truth dawns on them, Jonah, who is now outside, tosses his lit cigar into the window, blasting the three gunmen right up to God's front door.

Jonah collapses into the snow, bleeding as heavily as ever and his mind races back into the past. Jonah is ten years old and is forced into a boy fight by his father. We see Jonah getting pummeled all because his father wanted to use the prize money for whiskey.

A loud pounding brings Jonah back into the present and he sees that six more gunmen have shown up, looking for the first three. Jonah makes tracks for another building as the new guys locate the remains of their comrades. They also see the blood spatters being left by Jonah and start searching. Jonah, in his hiding place has another flashback, this time to when he found a small raccoon and kept it as a pet. Back in the present, the thugs split up and one of them checks the shed that Jonah is in. as he pokes around in the dark, Jonah steps out of the shadows and slides a knife through his ribs.

The dying thug makes the smallest of sounds, but his buddies hear just enough to head to the shed to investigate. They bust down the door and find their dead friend. They see a hole in the wall and assume that Jonah has headed out that way and give chase. Jonah, however, is still in the shed and slowly slips into another recollection, this time about Thanksgiving dinner where Jonah and family, unbeknown to one of them, consumed the family pet raccoon. This leads to a fight between Jonah and Woodson, with Papa Hex using the Backhand-Beltstrap Combo that was outlawed in Street Fighter 7.

Jonah comes back to his present troubles, bleeding still, and tries to move from his hiding spot, only to stagger and collapse once again. Shortly thereafter, the gunmen, realizing that they can't find Hex and decide to doubleback. They find him on the floor of the shed and prod his body with their foot. A pistol pops up in Jonah's hand and two gunmen show up early for their appointment with St. Peter of Pearly Gate fame.

A third gunman gets his act together, draws his weapon and Jonah barely whispers "Better hang it up while you're still ahead, right?" The gunman turns to see Stiletta and a small army getting ready to use the remaining gunmen as target practice. The gunmen drop their weapons as Vance, the doctor rushes forward to tend to Jonah. They quickly get Jonah back to Vance's place.

Vance's place is a huge warehouse, location unknown and we next see Jonah is some sort of hoverchair, not as cool as Metron's but a step up from Niles Caulder. He is in a healing body stocking that not only monitors vitals be released meds in appropriate doses. Vance explains that all Jonah has to do is think and the chair will go where he wants to go. It seems that Mookie, Vance's wife, collects amusement park antiques, several of them from the early 20th century. Jonah's chair goes gliding through the collection as Jonah sees 'antiques' that are completely new to him.

Past the bumper cars and merry-go-round horses Jonah finally comes across... 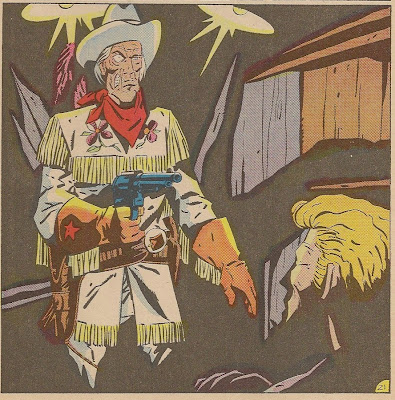 He thinks that someone had made a statue of him after he got old but then he realizes that it isn't a statue, but a stuffed human. He recognizes his own dragoons and sits in silence, staring at his own corpse. Finally, one thought travels through his mind "Ah guess it means ah'll be goin' back home one day... after all."

The issue closes with Stiletta finding Jonah sitting in the dark. 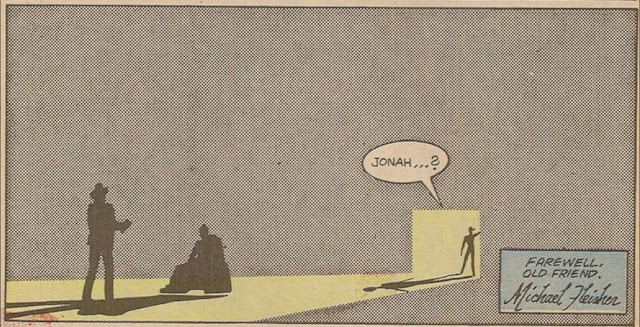 Statistics for this Issue
Men Killed by Jonah - 5
Running Total - 483 (428 past, 55 future)
Jonah's Injuries - Apparently gutshot and almost bled out.
Timeline - There is no way to determine how much time passed between last issue and this, but it appears that this issue takes place in only one day.

And this is how it ends. The incredibly sad horrific life of a scarred man, far from home and unable to return, is brought to some sort of circle where the end turns back onto the middle. It makes me wonder what Jonah's viewpoint was after that. Did he have a concept that every day could be his last, once he returned to his present, and he was more cautious? Did he think that he had nothing to fear in the future and became even more reckless there? And as postulated elsewhere, (By Ms. Hillwig, I believe) what went through Jonah's mind in 1904 when Lew Farnham held up that exact same cowboy suit for Jonah to see, almost like the Death itself grabbing you by the shoulder and spinning you around?

All in all, a so-so issue. Giffen's artwork was actually helped by the addition of white space between the frames, but in some places the weird angles, overuse of ziptone, and using color to provide artistic detail rendered the work on par with Bobo the Incredible Painting Monkey (Ya know, the monkey with a glass eye and a hook for a hand whose other arm got mangled in that automatic banana peeler accident that the zoo tried to cover up. Yeah, THAT monkey). In the flashbacks, Fleisher got some of his own details wrong as if he were working from memory, much like Jonah, but unlike Jonah, I don't think Fleisher was suffering from blood loss. I do have to admit that the last four pages of the book are worth double the price of admission, so I would suggest that you grab a copy if you can. (When was the last time THAT was ever said about a copy of HEX?).

18 issues of the bounty hunter thrown into the future comes to a close. Was it worth it? Or should they have just left Jonah in the past, never to see his own corpse?

The issue is closed out with a letters page, the last letter by T.M. Maple himself.

Next Up: Ten short months later and Secret Origins presents us with the Secret Origin of Jonah Hex.
Posted by Dwayne "the canoe guy" at 9:32 AM

At a guess, and this just dawned on me with your reviews; but I reckon Fleisher had a batch of Hex plotted out, then was told it was going to be cancelled, and crammed it all into the last couple issues. Which happens. (The last issue of Warlord recently, for example, although they should've known it was coming.)

But that ending...man, that's a punch in the gut. I've seen some discussion, that tries to spin it as yay, Hex will get back to his time. Yeah, and die horribly. Even though you figure Hex probably always thought he'd go out badly, it's another thing to see it like that.

Do you know if there was a reason Fleisher decided to leave Jonah in the future?

I'd speculate that it was more the choice of DC than Fleisher, especially since he could have written an end in the Secret Origins issue and didn't.

And yes, I did post on the DCMB about what possibly went through Jonah's mind when Farnham held up that costume...it was something to the effect of him thinking that he could avoid the fate he'd seen simply by turning Farnham's offer down. All in all, I do believe that seeing the corpse,combined with his whole future stint, probably would have gnawed at him for the rest of his life on some level. Certainly would have contributed to at least a few drunken nights, I'm sure.

I put a lot of my opinion regarding the HEX debacle into "The Long Road Home", so I won't repeat most of it here. Suffice it to say that it could have been a good series, if executed properly. It wasn't, and I really wondered how the whole thing got approved. I think Crisis On Infinite Earths is partially to blame, especilly when you take into consideration bits of info I've found over the past 5 years, including an answer I got from a DC exec in a WIZARD lettercol who said point-blank that the HEX series IS tied to COIE...though he didn't explain how. There's other oddities, things that suggest that HEX was perhaps meant to be something else, maybe something bigger or at least better, and it got lost in the post-Crisis shuffle instead. The old man's always gotten the shaft, and this is just another example.

I don't really like the whole concept of Hex in the Future, but still...seeing your own stuffed corpse is pretty awesome. And horrible. And fabulous.