I went to see Cars 2 over the weekend and if you can't tell from the title of this post, I wasn't too thrilled. I start throwing spoilers around right after this shot of a model of the landscape from outside Radiator Springs: 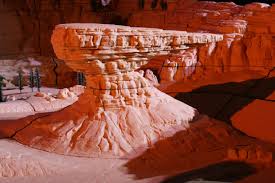 Cars didn't make as much money as other Pixar films but it raked it in with merchandise. With the upcoming release of Cars 2, I started seeing ads for State Farm, oil changes and a HUGE glut of toys at Target. This didn't bode well.

Cars was all about slowing down, looking outside yourself, learning about other folks, and an awful lot about Route 66. It was the reason my wife & I traveled the road for our 25th anniversary and we learned, once again, how much we love each other. Cars holds a special place in our lives, much more than the other Pixar films, except maybe for Up!

Cars 2 is about... well, it's about Mater. Now that isn't all bad, but I don't know that I laughed at something that was genuinely funny in the film. There is a spy opener for the film and we see a car fall off an ocean drilling rig, hit the water and burst into pieces. A car actually dies on film! Well, it gets darker from there. We are then allowed to watch an execution of a car that is forced to burst into flame. This is all a little heavy handed from Pixar (even though there was a shotgun toting granny in that Rat movie).

There is a global Grand Prix and Mater gets mistaken for a secret agent, but the English agents are so dense that when Mater tells them he isn't a spy, they think he's still in character, even though he's bumbling around like some kind of automotive Jar Jar Binks. Mater eats a bunch of wasabi, Mater leaks oil at a bad time, Mater encounters a Japanese bidet all in the interest of Pixar trying to out-gross Dreamworks in the potty humor department.

Later on, Mater gets a bomb bolted to his air filter and then we learn that the bad guy is the car that developed an new alternative fuel, but has also discovered the largest oil reserves in the world and in order for folks to not use his alt fuel, he sabotages the racers using it so everyone will go back to using oil that he has found. So the Green-tech guy is really Big Oil and we all know that is evil, right? Did you understand any of that? I'm sure the kids in the audience did.

A lot of folks are griping about the Big Oil reference but I'm more angered with the toilet scene and the actual line where Mater sings "Like a good neighbor..Mater is there." Really, Pixar? REALLY!?!?!?

The problem with this film is that there is nothing from the first film that made us care about it. There is no relationship between Lightning and Sally, Doc Hudson is dead, Mater is still Mater but he is way overexposed, we see little to nothing of Radiator Springs. This film is empty and hollow, with no soul. There is nothing here to inspire anyone to have an adventure (Up!), love their children more (The Incredibles, Finding Nemo), learn to accept others (Toy Story1, 2, 3), be true to yourself and follow a dream (Ratatouille), or even get off your backside and exercise (Wall-E).

Roger Ebert gave this 3.5 stars but in his review he talked more about his childhood of playing with toy cars than the actual movie. I'm glad he got some mileage from the film, because I'm sure that hardly anyone else will. I have to admit, this is the big stinker from Pixar and this one clocks in at 1/2 star out of three for me. I liked Jonah Hex better than this failed attempt to print money.
Posted by Dwayne "the canoe guy" at 12:14 AM