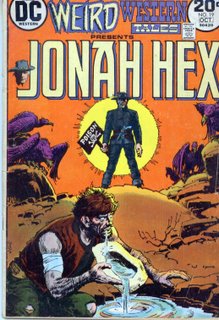 This story starts out in a 'Western State Penitentiary' in 1867. There are a bunch of convicts busting rocks. The prisoner in charge of water, Teddy Chandler, warns the other cons not to drink it and it turns out he has poisoned the guards. When the guards fall sick, the cons make a break for it. Several of them are shot (& presumably die, this IS WWT after all) with only Chandler, "The Gentleman Killer", getting away with the help of a black friend, Orion.

As they away, the Chandler poisons all the water holes along the way in case they are followed. At one point they stop and finally notice a rider that has been following them. The rider is Jonah Hex, still wearing the black hat with the striped band. Jonah draws on them & shoots the Chandler. While taking both of them back for the reward, they come upon a wagon that has been destroyed by a Comanche raid. Everyone is slaughtered except for one little boy. While Jonah is getting the boy out of the wagon, the Chandler gets a pistol & pulls it on Jonah. 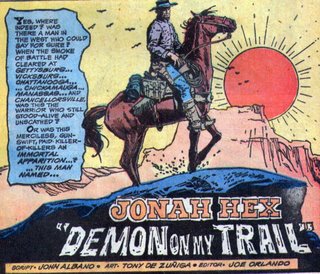 Chandler & Orion leave Jonah and the boy out in the desert to die, except Orion has compassion & drops a canteen for them. Carrying the boy, Jonah starts off on foot. A few days later Jonah wakes up in a cabin being tended to by a lovely woman. He had appeared, almost dead, on their doorstep. The boy had a fever but since Jonah gave him all the water, taking none for himself, the boy is now well. Jonah recovers from his dehydration, purchases a horse & pistols from the woman's father & takes off after the escapee & his buddy, but not before the woman takes note that Jonah is so gentle & kind. 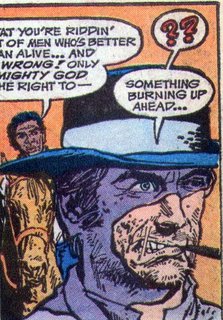 Meanwhile, the Chandler & Orion are taking inventory of their water supply. Chandler learns that they have 'lost' a canteen & now there is only enough water for one man to make it out of the desert. He turns and shoots Orion & leaves him to die. Jonah continues after them & notices vultures circling over the dying friend. Jonah gives him water & attempts to help him, but he dies anyway. Jonah covers the body with stones & continues in his search.

While tracking Chandler on con into the coming darkness, Jonah notes that his prey is a 'wily cuss, doubling back on me' when suddenly a bullet hits the ground in front of his horse. Jonah jumps off the horse and fires up into the hills after the Chandler. Sometime later, Jonah finally comes upon Chandler laying next to a waterhole, laughing. It turns out that Jonah had accidentally pierced Chandler's canteen and in the darkness he didn't recognize one of the waterholes that he had poisoned earlier and has taken several drinks of the poisoned water.

Chandler dies & Jonah notes that at least he had a sense of humor.

Statistics for this issue
Men killed by Jonah - Can you believe zero? The official scorecard would read:
Guards - 3
Indians - 2
Chandler - 3, including himself.
Running Total: 39
Jonah's Injuries - Dehydration
Timeline - Blatantly stated, 1867, which would place the other issues with the black hat in roughly the same year or so. Chronologically, this is one of the earliest stories of Jonah Hex as a bounty hunter since he was scarred in 1866. 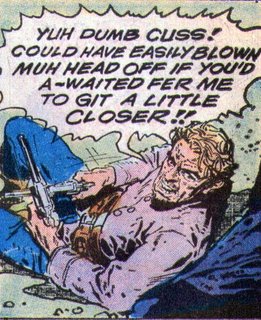 This was my first comic that featured Jonah Hex & I bought it for the cover alone. I bought a lot of the 'scary books' and the picture of Jonah on the front looked creepy enough for me to buy it. I was also purchasing Weird War Tales at the time& I figured this would be ghost stories & such in the old west. It turned out to be better. A good issue, with circumstances playing a large part & Jonah just reacting to them, rather than causing things to happen. I felt that the story focused more on the con than on Jonah, but that made us see Jonah through the eyes of the people around him. The artwork was incredible, often with the art spilling out of the frames all over the page, even with word balloons stretching across two frames. Almost perfect work.

Next Issue: Indians attack a fort and Jonah gets personal with Eileen.
Posted by Dwayne "the canoe guy" at 5:46 AM

Who wa sthe first to draw Hex as looking like Clint Eatwood? That second panel comes pretty close, I think. Intentional or not?

I think De Zuniga was the first... The Spaghetti Western (specially the "Dollars Trilogy" starring Clint) was an inspiration for the character. Mark Texeira also drew Hex very close to Clint.