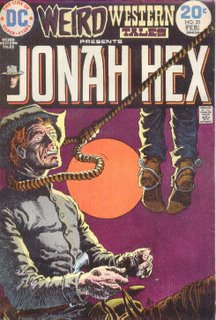 Weird Western Tales #21 - Jan-Feb 1974
"The Gunfighter "
John Albano, story - Tony DeZuniga, art.
Jonah goes after a gang that has robbed a stage coach & killed it's passengers. He gets the drop on them while they sit around the campfire. He shoots and kills one and shoots another then kicks him in the face. Later, while taking the surviving 3 back to the law, the injured Jaspar dies from his wounds.

A snowstorm starts and Jonah & his three charges take shelter with an elderly woman & her daughter, Valerie. The next morning, one of the men comes down with a fever. While Jonah is talking to the woman of the house, Valerie (in her 20's) frees the remaining robber (Roy), who then grabs a fireplace poker and beats Jonah to the ground.

Roy & Valerie take off. Jonah is left with the old woman to take care of him & he has fever dreams of the Civil War. After a few weeks, he is better and leaves. As he rides off, we see the last robber holding a knife & sneaking up on the old woman.

Two days later, Jonah catches up with Roy & Valerie. He manages to lasso Roy around the neck & strangle him until Roy is dead. Jonah is then taking Valerie & Roy's body back to town for the reward. During the night Valerie tries to sneak away & gets captured by three man. They suggest that they intend to rape her but Jonah finds her and strangles one & shoots the other two dead. Jonah & Valerie arrive back at the farmhouse to find the old woman stabbed. Jonah fetches the doc and the old woman pulls through. The doc mentions that Jonah has donated $400 to the children's hospital.

4 days later, Jonah tracks down the last of the stage robbers and shoots him square between the eyes. 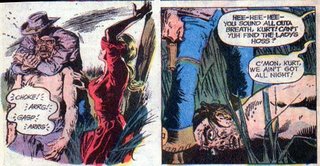 Stats for the issue:
Killed by Jonah:
Shot - 5
Strangled - 2
Running Total - 49
Jonah's injuries: Beat with a poker.
Timeline: Nothing to indicate any particular year. I would not place this during or immediately after his marriage to Mei Ling.

A fairly enjoyable issue. Jonah & Valerie bicker back & forth and Jonah pretends that he doesn't care much for people, but the truth gets out when he is worried about the old woman and then donates to the children's hospital. DeZungia's art is fierce and sometimes creepy, but nothing is weirder than this panel where Jonah strangles the would-be rapist as Valerie does some weird Voodoo dance of death.

Next Issue: Lee Van Cleef and a black man eats watermelon.
Posted by Dwayne "the canoe guy" at 6:28 AM

I haven't made it through all your archives yet, but I was wondering how you feel about the new series.

I liked the first three or four issues. After that it kinda seemed to go down hill.

Actually I was really pissed off at the first issue, which was almost an exact copy of the issue #1 of the first series. I felt my money was wasted.
Since then? I have really enjoyed the series. At times it can be uneven, but I really enjoy any story where we get to see a little bit more of Jonah's character. In that context, my favorite issue has been the Nuns w/Guns issue. It was almost cinematic in its storytelling.
Thanks for dropping by, enjoyed your site & I think your avatar is hysterical, I need to get one of Jonah eating something.