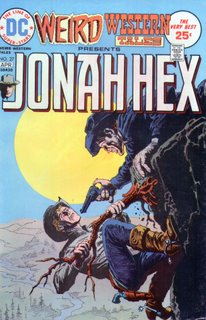 Panaligan is back & the book looks much better thanks to him. We start with a women's suffrage rally in Kansas. Miss Todd is espousing how the state constitution needs to be amended to allow women to vote. Suddenly a lasso falls around her shoulders and five men wearing sheets and on horseback destroy all the signs and scare everyone away. They slowly drag Miss Todd away and warn her against causing any trouble.

After a short time they ride off, leaving the meeting in shambles. Five miles from town they ride past Jonah Hex who notes that it's a might early for Halloween and that their getup reminds him of some folks in Tennessee. When Jonah gets into town he heads for the sheriff's office where he encounters an angry Miss Todd arguing with the sheriff.

Sheriff Hillman isn't interested in chasing after men she can't identify and has no time to offer her protection. Jonah mentions that he'd like to get the $1000 reward for the dead men he has outside & they are getting pretty ripe after 4 days.

The sheriff has a brilliant idea and suggests to Miss Todd that she hire Jonah to protect her. Jonah thinks she's kidding about suffrage and comments that if women get to vote they would probably outlaw drinking. Jonah tells Miss Todd that she can buy him a steak and tell him all about the women sufferers. Miss Todd corrects him, saying that it's 'suffrage', not 'sufferers'. Jonah laughingly agrees, saying it will be the men that will be the sufferers. 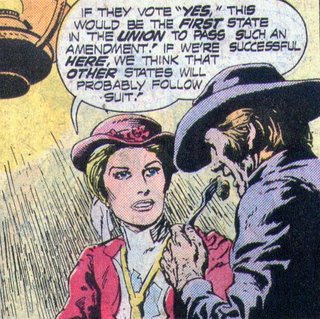 During dinner, Miss Todd explains her crusade and how the men breaking up her rallies work for Curtis Thraxton, who owns a big cattle ranch. Thraxton don't want women voting since they will support a candidate for Governor that will change the water-rights policy of Kansas & Thraxton currently have control over all the water in the area. Jonah agrees to protect Miss Todd until the legislature votes the following week. Snce he hates taking money from women, he will only charge her $500.

A couple of men at a nearby table overhear everything and then report back to Thraxton. Thraxton's men offer to kill Hex, but Thraxton says that since Jonah has done nothing yet, they should kill Miss Todd.

That night they sneak into Miss Todd's hotel room and catch her asleep in a rocking chair, but it turns out to be Jonah in a shawl & bonnet. 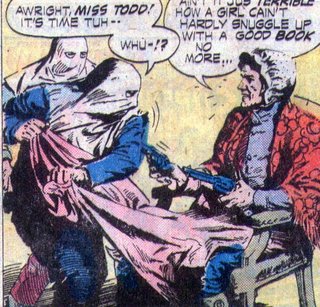 Jonah gets the drop on them & Miss Todd has a good idea for revenge. Jonah makes the men put on dresses & bonnets and parades them through the saloon. 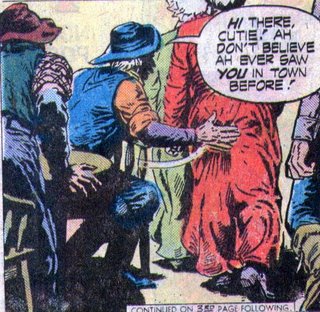 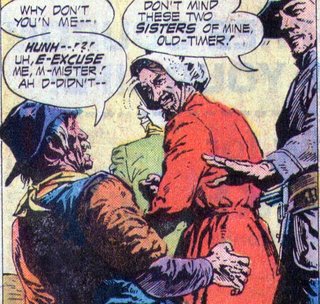 He then ties them to their horses wearing signs reading "We Support Women's Suffrage".

The men end up back at the Thraxton ranch where Thraxton devises a plan.

The next day a young boy finds Hex & tells him that Miss Todd has been hurt over at the Livery. When Jonah goes in he is ambushed and taken to Thraxton. Thraxton tries to reason with Jonah, offering him double to side with him. Jonah mentions that he only switched sides once in the middle of a fight and he has swore to never do it again. Thraxton then tells his men to take Jonah & shoot him.

The two henchmen take Jonah to a 2,000 ft cliff & as they are preparing to shoot him, Jonah jumps over the edge of the cliff. When one thug looks over the edge, Jonah, clinging to a small tree growing from the cliff-face, grabs the man's foot and pulls him over the edge. Jonah then grabs his knife and stabs the other thug in the chest who falls over the cliff as well. Jonah then notes a problem with his line of work is that he'll never make any money if he always keeps losing his knife & guns.

Back in town Jonah spends the rest of the week protecting Miss Todd until a telegram arrives giving the outcome of the legislative vote. The amendment was defeated. Jonah asks for his money which the weeping Miss Todd shove into his hands. As Jonah prepares to mount up & ride off, Thraxton and three of his men show up to draw on Hex. Jonah tries to warn them off, but they draw on him anyway. He guns them all down.

Jonah starts to get in the saddle but Thraxton is not dead. As he draws his pistol for the last time, there is a sudden gunshot and we see that Miss Todd has killed Thraxton with rifle. She tells Jonah that he owes her a favor for saving his life and demands that he wear an armband reading "Support Women's Suffrage". Jonah rides off in total humiliation. 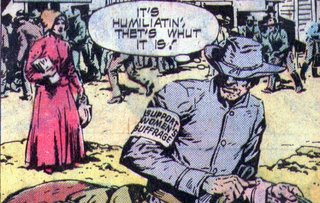 Statistics for the issue
Men killed by Jonah - 5: 1 thrown off a cliff, 1 stabbed, 3 shot

Running Total - 81
Jonah's injuries - Knocked out with axe handle
Timeline - This one takes place squarely in 1867. The reference to the KKK and Kansas Women's suffrage dovetails nicely.

I enjoyed this story quite a bit. It is one of the more light-hearted stories involving Jonah, what with all the ribbing aimed at Miss Todd, Jonah in drag, and then the dressing of the thugs in women's clothes. I especially liked Thraxton's attempts to reason with Jonah & Jonah's response, alluding to his leaving the Confederacy.

The only thing that could have made the ending funnier would have been this: 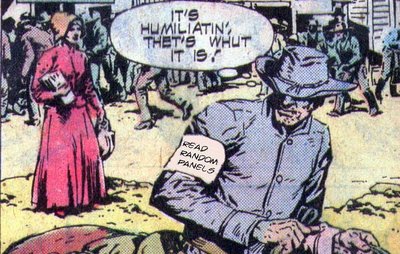 Next Issue - Hidden Treasure, a Burning Stagecoach, and Jonah gets Crucified!!

"Since he hates taking money from women, he will only charge her $500."

I'm kind of disppointed I wasn't able to help track down any useful historical - Hey! Wait a minute!

If not for Random Panels, how else is Hex gonna find out about the exciting future world of talking apes and batmen that he's due to visit in about ten years or so?

I thought I had better do some homework myself this time.

Jonah never ran into a Gorilla, but he did encounter a giant grasshopper, a viking, man-eating worms, a cult that worshipped an executed Prohibition gangster, robot dogs, Batman, the LSH, and a demon Ninja.

I've heard that series isn't the greatest, but I'm gonna have to check it out.