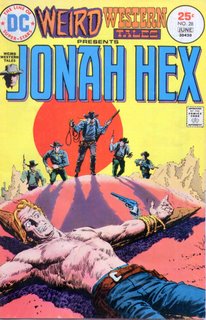 The story starts in Green Rapids, Wyoming, 1874. A telegraph operator receives an important telegram. He rushes out to deliver it when he hears gunshots. In the street is a dead man and Jonah Hex reloading his pistol. The telegram is a job offer for Jonah from the Huddleston Downing Express Company, over in South Pass City.

Four days later, Jonah arrives in South Pass City just as the stage arrives with one of the drivers shot up by the Hauschel Gang. Jonah locates Mr. Preston, the man who sent the telegram. Preston explains that Huddleston Downing ships gold nuggets from the local mine over to Green River City but Jake Hauschel & his gang are constantly robbing the stage. Tomorrow they are shipping $135,000 by a secret route that only Preston and his clerk Sims is aware of.

Preston shows Jonah that he has had the coach reinforced with steel plating and demands that Jonah ride inside instead of alongside. Jonah takes the job.

That night, Sims, the clerk, shows up at the Hauschel hideout and delivers all the info on the shipment, route, guards, eveything, in exchange for 25%. As he turns to leave, Jake Hauschel shoots Sims in the back.

The next morning, Jonah is telling Preston that he hopes they don't regret letting Jonah see the route in advance. That proves to b true as the stagecoach comes up on "The Narrows", a half-mile stretch of road with cliffs towering over it on both sides. The pass is so narrow that the stage couldn't turn around if it had to. Just as the stage gets to the middle, the Haschel Gang starts firing from above, killing both drivers and all six horses.

Jonah and the men are pinned down in the stage. The other guards ar convinced they're safe because someone will come along and then go get help. Jonah decides to make a break for it. As he runs for shelter, Jonah is cut down in a barrage of gunfire. The Hauschel Gang then sends flaming kegs of kerosene down onto the stage, setting it afire. As the guards run out, they are shot dead in their tracks.

After the stage burns out, Jake and the boys gather the chest and ride off. Several hours later, Jonah stirs and realizes that he luckily had a bullet only craze his scalp. Manyhours later, Jonah arrives back in town on foot. As the doc is tending Jonah, Preston storms in, demanding to know what happened. Jonah mentions how the Gang knew the route. Preston mentions that Sims is missing. Jonah asks whose idea the "Narrows" was and Preston owns up to it, saying that it was the shortest & cheapest route. Jonah bad-mouths Preston and then leaves.

The next morning, Jonah is having breakfast at the saloon and he is approached by Cobb Wisner. Cobb's cousin is a member of the Hauschel Gang. Cobb tells Jonah tht he has heard the gang has almost a half million stashed away. Cobb says that he could tell Jonah where the hideout is and Jonah could kill them all and find the money. Jonah turns down Cobb's offer, saying that he doesn't want their blood money. Jonah heads out on his own to track down the Hauschel Gang.

As he starts closing in on them, he gets ambushed by two members of the gang who decide to "fix 'im up jus' lahk we done thet preacher ovuh in Tucson last year" and they tie Jonah to a cross made of saplings. They empty Jonah's canteen and leave him for dead. 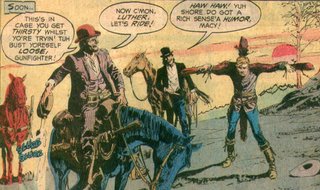 Jonah eventually finds a narrow canyon archway and keeps slamming the ends of the crosspiece until it finally cracks but Jonah collapses from exhaustion.

That night, at the Hauschel hideout, Jake wakes up in the middle of the night and stabs his own lookout, returns to the cabin and shoots the remaining four members of his own gang. In the gunfight, Matt Borden (the cousin of Cobb Wisner), gets off a lucky shot and kills Jake. Wounded, Matt heads for town on horseback. 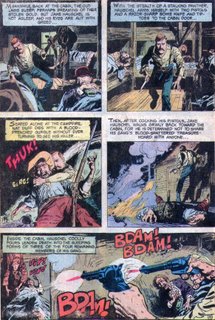 Jonah comes to and continues on to the hideout, only to find everybody dead and a trail of blood leading back to town. Meanwhile, in town, Matt comes riding in, shouting for help. Several townsfolk rush to his aid and start to take Matt to the doc's office. Just then Cobb shows up and demands that Matt tell them where the loot is hidden before they get him treatment. An arguement ensues and then Jonah comes riding up. Jonah comments that Cobb is pretty free with money that isn't his and then rides off to get a steak.

The townsfolks side with Cobb and refuse to let the Doc treat Matt until he reveals where the loot is hidden, but Matt then up & dies. The townspeople get angry at Cobb for dragging things out and losing their share of the treasure. They grab a rope and hang Cobb in the middle of town. A man comes running into the saloon where Jonah is eating and shouts out they are gonna hang Cobb. Everyone excitedly rushes out to watch the hanging, leaving Jonah alone, eating his steak.

Statistics for this issue
Men killed by Jonah - One man seen dead in the street at the start of the story. The Hauschel gang was responsible for 12 men dead (including themselves)

Running Total - 82
Jonah's Injuries - Skull grazed by a bullet
Timeline - 1874, stated clearly at the beginning. A blurb at the end of the story explains that this story was true and the Hauschel gang's loot has never been found. I learned that South Pass City is real, but I couldn't locate any info on the Hauschel gang or a company called Huddleston Downing Express.

I didn't care for this issue very much, it was nice to see Jonah tied to real events, but has been done since and has been done better. At times the story almost seemed like one of the old westerns that Gold Key put out, with tons of text on the page (like when Jake kills his gang). George Moliterni's art is very good, lifelike and gritty with people having natural proportions and their clothes hanging like real cloth. George did a lot of work on Jonah and I always thought he was under-appreciated.

Next Week: Prison Break!! The truth about the Man with the Eagle-topped cane!! And the Emancipation Proclamation!!

That art wouldn't look out of place in one of the better EC titles. Do you know if Moliterni ever did any war comics? If so, I'd love to see'em.

Comics.org doesn't show any war books by him, but it's missing a lot of the Hex stories that he drew. Guess I'll have to fill in the gaps